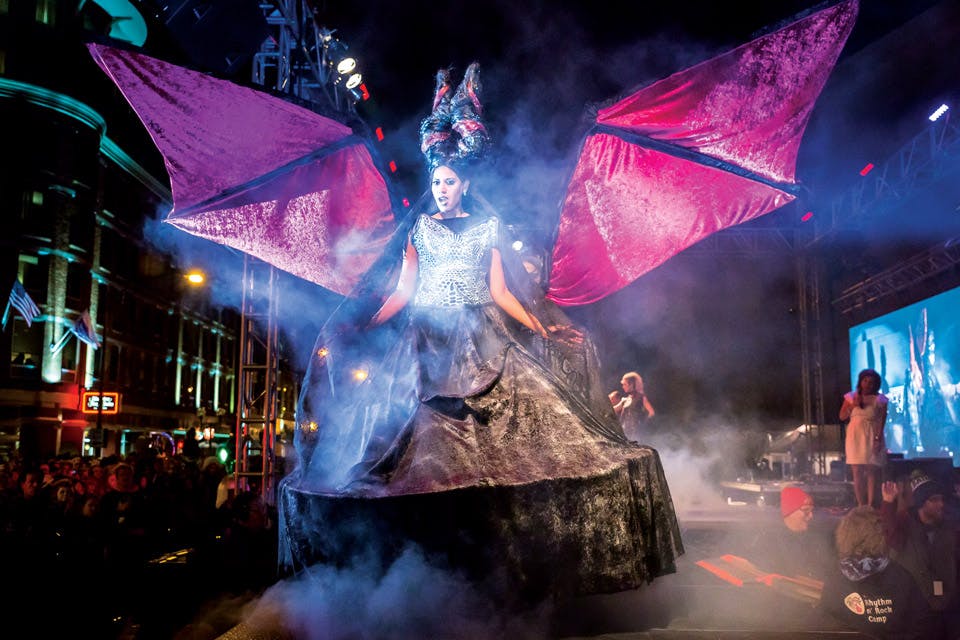 Fashion is always on display in Columbus, but HighBall is one of its biggest weekends.

Later this month, more than 30,000 people will flood High Street in Columbus’ Short North Arts District to celebrate what is arguably the nation’s most elaborate costume party. The event features an over-the-top runway show and costume contests open to the public, where past winners have ranged from Scooby-Doo characters to Ludo from the 1986 fantasy film “Labyrinth.”

Beginning as a small, intimate street party, HighBall Halloween has grown into a major capital city event — one that will celebrate its 10th year when it returns Oct. 20 and 21.

“There’s nothing like it,” says Betsy Pandora, executive director for the Short North Alliance. “You can go to Carnival, Mardi Gras, a Halloween party, but HighBall marries all three of those spirits into one.”

The Halloween celebration begins Friday night with HighBall: On the Rocks X. The themed costume party and concert will feature bands covering music from the Beatles, Johnny Cash, Madonna, Beyonce and more, with members of the public encouraged to dress up as one of the musical acts or in a style that’s reflective of the musical era they represent.

Saturday is HighBall High Fashion, which includes the centerpiece of the weekend: The Battelle Costume Couture Fashion Show. Ten designers will compete to create the best couture Halloween costume, along with three other creative looks, in order to win bragging rights and a cash prize.

“Ten years ago, the community business owners and others came together to create an event that defines what we do and who we are creatively,” says Pandora. “That is displayed through the fashion show.”

The 2017 event will also include a runway show featuring winning HighBall costumes from past years.

“The people who attend are amazed not only by the artistry of the fashion show, but also by what the person standing next to them might be wearing,” adds Pandora. “At HighBall, we like to say you are what you wear, and people take that seriously.”

The winner of last year’s Battelle Costume Couture Fashion Show, Shiree Houf, is busy getting ready to defend her title.

“My introduction to fashion was actually through HighBall,” says Houf, who earned a Bachelor of Arts degree in theatre from Miami University and a Master of Fine Arts in design from The Ohio State University. “My background is in theater and it wasn’t until my junior year of undergrad that I really started getting into costume design.”

Houf says her plan for this year’s competition is to construct couture costumes representing characters from one of her favorite childhood stories.

“What makes my work stand out is that I try to create a story and tell a story,” she says. “It’s because of my background in theater that I can do that.”

As a new adjunct faculty member at the Columbus College of Art & Design and a mom who does freelance work as a costume designer, Houf has a busy schedule and says she doesn’t often find the freedom that HighBall provides. With theater jobs, she is tasked with delivering what the role requires, while HighBall designers are given free reign over what they want to make.

“For me, HighBall is an opportunity like no other,” Houf says. “It’s like I get to create my own theater show or my own pieces of art, however I want to do it. Unless you’re a really big designer, you don’t always necessarily get that full artistic and authoritative power over what you want to create.”

After spending three years in New York creating costumes for Broadway shows, designer Aaron James moved back to Columbus and is getting ready for his fifth year participating in the Battelle Costume Couture Fashion Show.

“I sort of fell into it,” James says of fashion design. “I was a dancer and I liked to make my own costumes, so that’s how I first got into sewing. And then one thing sort of led to another and it snowballed into fashion and then costume designing.”

Over the past 10 years, James has participated in shows such as HighBall and Columbus Fashion Week, and he has had work featured in Saks Fifth Avenue’s holiday windows in New York City, which portray dazzling holiday party scenes with mannequins wearing high-end fashion. James is quick to answer when asked what makes him keep returning to HighBall year after year.

“I just love how there are no rules,” he says. “You just go out there and make the biggest, craziest thing that you want to make. It’s all about size. The crazier it is and the wilder and more ornate, the more special it is.”

As a self-taught designer, James says he appreciates the platform HighBall presents for up-and-coming talents to showcase their work and get recognition, while exploring their creative side.

“For this year, I was inspired by woodland fairies,” says James. “I always tend to go more towards a fantasy type world with my designs. It’s a bit softer than ideas I’ve used in the past, but it shouldn’t be any less stunning.”

As a young girl growing up in Zimbabwe, Edina Ndebele, who now resides in Cincinnati, always had aspirations of creating something beautiful inspired by the characteristics of her culture.

Ndebele holds an associate degree in fashion design, which she earned in Zimbabwe in 2006. Her fashion-design journey since then has lead her to create her own clothing line that represents her African roots.

After moving to the Unites States in 2010, Ndebele found many opportunities opened up for her. Since then, she has participated in events such as New York’s fashion week. This year will mark Ndebele’s second time at HighBall.

“The first time, I thought, oh well let me just try,” Ndebele recalls. “It was another part of my career that I had never ventured into. HighBall challenges me to step into zones that I normally don’t, and it’s exciting because it allows you to go beyond your imagination.”

Ndebele says her design process always begins with her surroundings. Her drafts of outfits come to fruition when she goes out and explores, letting nature and scenery activate her ideas before turning to fabrics. Her surroundings combined with her culture act as her inspiration for all of her pieces. Ndebele teases that her creations for this year’s show will be bigger and better than ever.

“They have an infusion of two different cultures: my culture and the culture that is here,” she says. “It’s a combination of where I was yesterday and where I am today.”