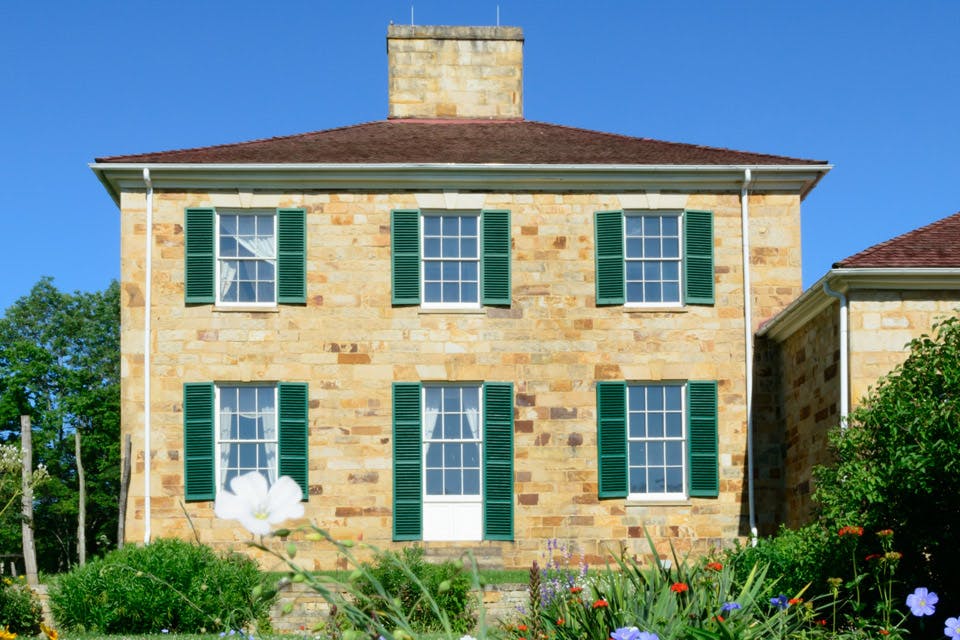 EARLY OHIO
Explore the former home of our sixth governor, a restored iron-furnace site and a Gallipolis tavern that was visited by France’s Marquis de Layfette in 1825.

Visitors can’t look inside the antique spice chest, but Kathy Styer, executive director of the Adena Mansion & Gardens Society, knows the secret it holds. The chest belonged to the family of Eleanor Worthington, the wife of Ohio’s sixth governor, Tom Worthington.

“Each time it was passed on by a daughter, it was signed and the signatures go back to about 1763,” says Styer. “We are very proud of that piece.”

Tom and Eleanor Worthington lived at the Chillicothe estate, which once covered 2,000 acres, with their 10 children. The home was completed in 1807 and designed by Benjamin Henry Latrobe, who is considered to be the first professional American architect. He also served as architect of the U.S. Capitol under President Thomas Jefferson.

Today, guests can see Eleanor’s antique spice chest and other artifacts from the time she and her family lived there. Guided tours of the historically restored mansion are available, and visitors can also check out a tenant house, springhouse, wash house, smokehouse and barn located on the now-300-acre property. Work to restore the estate’s formal flower gardens, vegetable gardens, vineyard and grove is ongoing. 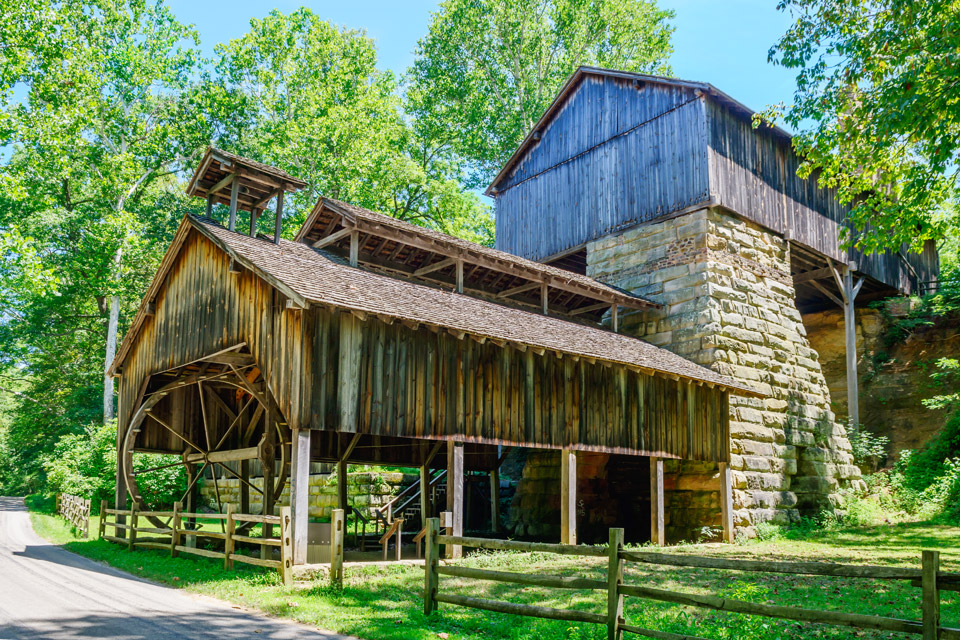 Before the early 20th century, huge stone furnaces with raging fires operated in remote locations throughout the forests of southern Ohio. They produced pig iron that fueled our nation’s industrialization and were a major supplier of iron to Union troops during the Civil War.

Although several furnace sites remain throughout Ohio, most are now only ruins. Buckeye Furnace is the exception. It was reconstructed by what is today known as the Ohio History Connection in 1972.

“Buckeye Furnace is one of three reconstructed charcoal-fired iron blast furnaces in the United States,” says Jim Meacham, president and treasurer of Friends of Buckeye Furnace, the volunteer group that locally manages the site for the Ohio History Connection. “It’s set on 270 acres of beautiful, wooded southeastern Ohio hill country.”

Some visitors to Our House Tavern claim that if you listen closely, you can hear a woman singing in the ballroom of the restored 1819 building. Believers says the ghost is Swedish opera singer Jenny Lind, who stopped at the tavern during her American tour in 1852.

But that’s just one of the notable names to pass through the doors over the years. Perhaps the most famous arrived decades earlier when the Marquis de Layfette stopped by while visiting Gallipolis in 1825. It was part of a larger tour of the United States by the French general who aided colonial forces during the Revolutionary War.

Over the years, the tavern was also used as a boarding house and temporary Civil War hospital. But it was Henry Cushing and his sister, Elizabeth, who made the tavern a center of community activity during the early decades of the 1800s. “They called it the Henry Cushing Tavern because he instigated it,” says Our House Tavern site manager Becky Pasquale. “But it was [Elizabeth’s] property.”

ANCIENT FOOTSTEPS
Visit the largest prehistoric hilltop enclosure in North America, the largest set of geometric earthworks in the world and a flint quarry used by Native Americans 14,000 years ago.

It wasn’t an easy accomplishment — not when it comes to transporting soil in small baskets, 35 pounds at a time — but the native people who called what is now southwest Ohio home worked tirelessly to create a sacred space that can still be experienced today.

“This massive complex was a place of ceremony for ancient American Indians nearly 2,000 years ago,” explains Brad Lepper, curator of archaeology for the Ohio History Connection. “The walls wind for three and a half miles around a prominent hilltop overlooking the Little Miami River Valley.”

The largest prehistoric hilltop enclosure in North America,  Fort Ancient Earthworks was most likely built by members of the Hopewell culture using clamshells for hoes, sticks for digging, and bones and antlers as trowels. Fort Ancient’s roughly 125-acre plateau is enclosed by walls that run from 5- to 23-feet high. 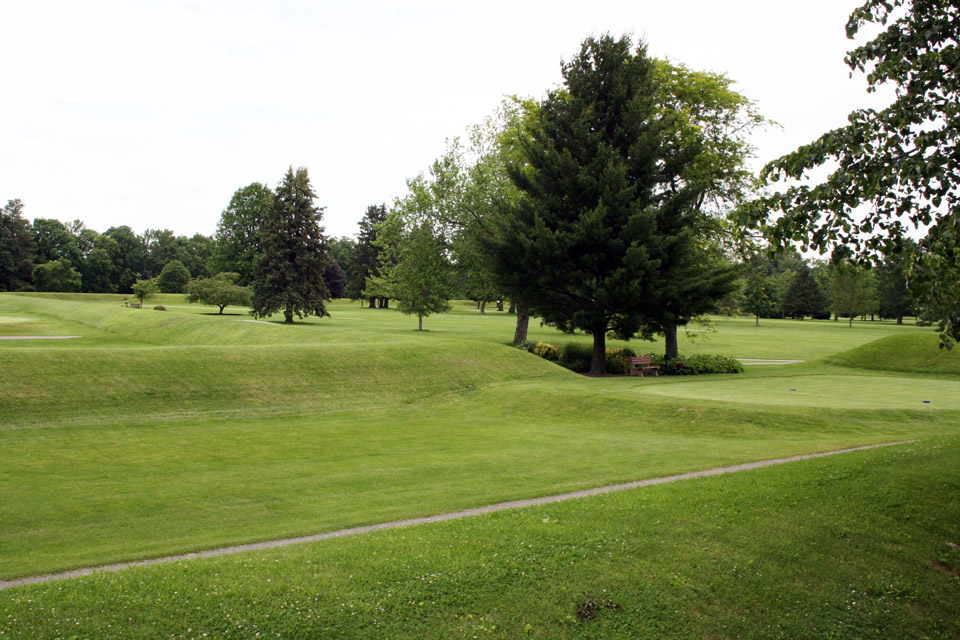 Some archaeologists believe that the people of the Hopewell culture, who lived between 100 B.C. and 500 A.D., built the Newark Earthworks’ amazing mounds, moats and straight embankments to align with the rising and setting of the moon. But the site still holds many mysteries.

“The Newark Earthworks is the largest set of geometric earthworks in the world,” explains the Ohio History Connection’s Brad Lepper. “Extending across more than 4 1/2 square miles, the various parts incorporate a sophisticated knowledge of geometry and astronomy into their architecture.”

The Newark Earthworks consists of three constructions. Think of the Great Circle Earthworks as an ancient outdoor auditorium designed for ceremonial activities that required visitors to cross over a wide moat to gain entry. The Octagon Earthworks encloses 50 acres, including the modern-day Moundbuilders Country Club golf course. The third part is Wright Earthworks, a fragment of what once was a square enclosure.

Flint is Ohio’s official gemstone. The colorful sedimentary rock with high quartz content was first quarried by early inhabitants of what is now Ohio more than 14,000 years ago. It was split and used for weapons such as spear points, knives and arrowheads, as well as tools and jewelry. Flint also became a valuable trading commodity, and nowhere in our state was there a greater source of flint than this 3-by-9-mile vein in central Ohio.

“If you are looking to understand Native American sites in Licking County, then Flint Ridge is the technological base, and the [Newark] Earthworks became the cultural expression of the people,” says Tim Jordan, site manager at Flint Ridge Ancient Quarries & Nature Preserve.

Later, Ohio pioneers used flint to make millstones for water-powered mills and in their homes to grind grains. Today, visitors can still see the quarries — water-filled basins chipped out of stone to retrieve the flint — with some measuring as large as 60 feet deep and 60 feet across. A small on-site museum built over a pit provides information about the excavation and uses of flint, and guests can walk the natural trails. Open year-round during daylight hours, museum hours Fri.–Sun. 10 a.m.–4 p.m. (May through early October); Adults $3, seniors (60+) $2, students (K–12) $1; 15300 Flint Ridge Rd., Glenford 43739, 740/787-2476, flintridgeohio.org