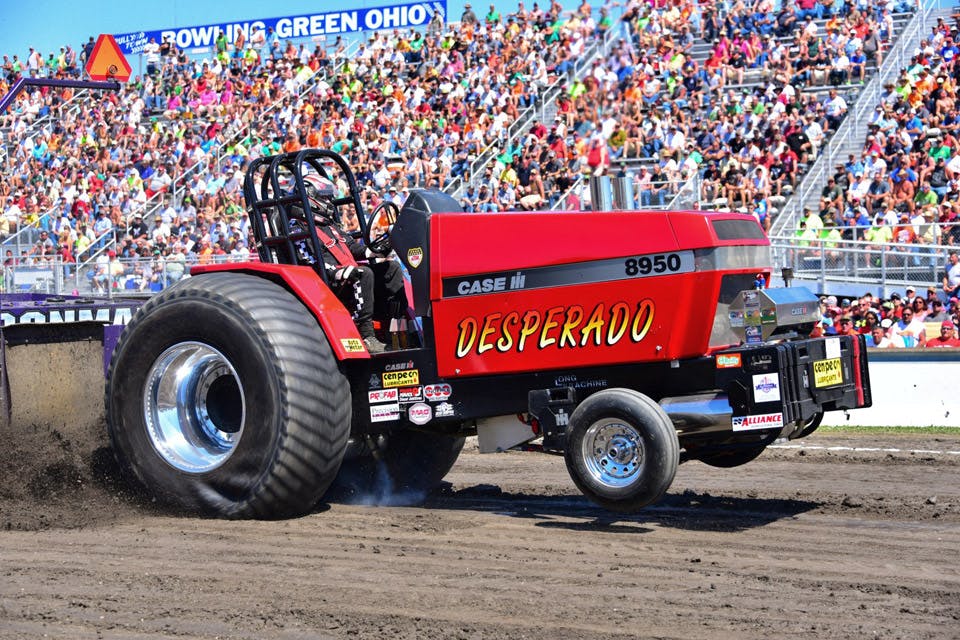 Tractor pulling began as a friendly competition between local farmers to see whose agricultural machinery had the most power. They would pull weighted sleds at county fairs on Sunday and then plow their fields on Monday with the same tractor.

The sport grew in popularity during the 1950s and ’60s, but the machines that will face off during the 50th anniversary of the National Tractor Pulling Championships at the Wood County Fairgrounds Aug. 18 through 21 bear little resemblance to the farm equipment from which they sprung. Here are a few other things you may not realize about what’s known as “the world’s heaviest motorsport.”

It’s a Hobby … Really: Competitors are not professional drivers, meaning they’ve undertaken a costly way to spend their free time. “It’s a very, very expensive hobby for them,” says David Schultz, event official for the Northwestern Ohio Pullers Association, the Bowling Green competition’s promoter. “An engine can cost $50,000 to $100,000 and some tractors have six engines.” The 12 pulling classes also include trucks and semis.

It’s Power, Not Speed: Pulling a weighted sled as far as you can is the goal here. Some tractors can pull 50,000 pounds more than 300 feet. While there is more than $350,000 in money and prizes at stake in Bowling Green this month, there’s also another reason pullers want to face off. “The top five from each class compete on Sunday for the Bowling Green Championship Ring,” says Schultz. “It’s a major battle between the red and the green — Case IH and John Deere.”

It’s a Fan-Friendly Sport: Friday and Saturday nights feature concerts, and this year brings an expanded Retired Tractor Museum for spectators to enjoy. “Twenty legend tractors that pulled 20 to 25 years ago have also been invited to pull for the 50th anniversary,” says Schultz. And if you think the crowds get excited for their favorite pullers, you should see the parents at the kiddie tractor pull featuring pint-sized pedal tractor pullers.