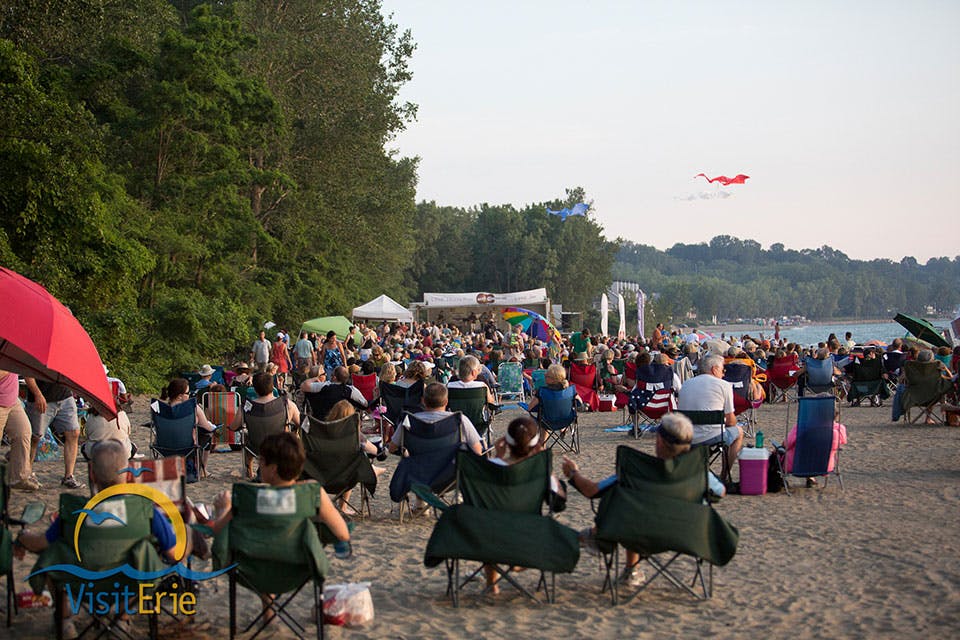 The region’s rich visual beauty is a delight to the senses, with its pristine shorelines and gently rolling green hills. There’s the sweet scent of plump grapes hanging on vines and the strains of live music drifting through the air on summer nights. The recreational opportunities in Erie, Pa., and Chautauqua County, N.Y., are impressive, whether you’re in the mood for art, history, boats or wine. Here are six summer events and festivals in the area you can use as a starting point for your own explorations.

This annual celebration began in 2001 as a way to honor the role that boating plays in communities along the water. Marinas throughout the nation take part by hosting fun and educational events, and Chautauqua Marina, built in 1937, is an active participant. Its National Marina Lake Day Celebration draws both water-loving residents and tourists.

The morning’s lineup includes a musky fishing class, a fly-tying workshop for children and a youth fishing contest. Experts on deck will also discuss safe boating tips, navigation laws and the Chautauqua Lake Association and Chautauqua Watershed Conservancy. Lunch is available for all participants and their families during the awards program, and events are free, although preregistration is required.

“Each kid gets a prize in the fishing contest,” say Debi Clementi, a boating safety instructor and an organizer of the event. “The best part of the day is seeing the kids fishing with their parents and grandparents. Every child catches something.” West Lake Road, Mayville, N.Y. 14757, 716/753-3913, chautauquamarina.com

More than 250 species of trees grow at the 35-acre Lake Erie Arboretum in Erie, Pa.’s Frontier Park. A stream runs through the serene property and a diversity of wildlife calls the place home. The scene supports Lake Erie Arboretum at Frontier Park director Char Mashyna’s belief that there is no better setting than nature for enjoying the cultural arts.

The weekly free concerts and poetry readings take place in the arboretum’s amphitheater, surrounded by a hillside landscaped with large stones that serve as extra seating. “An added joy is that at the top of the hill there is a playground where you can take your children if they get antsy,” says Mashyna.

This year’s Century House Tour, “Little Journeys to the Homes of Chautauquans,” features cottages on the grounds of the Chautauqua Institution that are at least 100 years old. The internationally famous cultural mecca, situated on a 750-acre lakeside campus, has offered lectures, art exhibits and music since 1874.

“Owners try to keep [the homes] original, but livable,” says Rosemary Rappole, chairman of this year’s house tour, which is sponsored by the 101-year-old Chautauqua Bird, Tree and Garden Club. “The cottages have kept their history and charm. We chose 12 that have never been on the tour or at least not recently.”

Presque Isle State Park, a 3,200-acre peninsula known to geologists as a recurving sandpit, was formed more than 11,000 years ago. The area’s Gull Point grows a little each year as wind and water carry sand eastward. The peninsula has impressive and diverse ecosystems, and birders from across the United States enjoy spotting migratory birds that are said to adorn the trees like ornaments.

“There is a tight community of kite flyers in this area and they all congregate on Sunset Beach for this festival,” says Jon DeMarco, acting executive director of Presque Isle Partnership. “These are big, beautiful kites and some pretty amazing contraptions. The festival’s Saturday night bonfire on the beach is also the biggest bonfire I have ever seen.” Presque Isle State Park, 301 Peninsula Dr., Erie, Pa. 16505, 814/833-5144, discoverpi.com

Forget Napa. New York’s wine industry wants Americans to think of it first when considering domestically produced vino. Extending from Chautauqua County to Erie County, the region didn’t initially get the recognition it deserved, according to William Merritt, president and owner of Merritt Estate Winery in Forestville, N.Y.

“So in 2007 we created America’s Grape Country Wine Festival as a way to promote the regional wine trail,” he says. “Over 60 percent of grapes grown in the state are produced in western New York.”

More than 40 wineries are represented at the festival, which features free wine seminars and wine tastings. But a change in New York law also means that small-batch breweries, small-batch distillers and cider producers are welcome.

“It’s really a celebration of food and beverages,” explains Mike Ferguson, the festival’s brand promoter. “Celebrity chef Paul Mach, who has been with the Kentucky Derby since 1991, will present seminars featuring appetizers to desserts, [and] this year is a Mardi Gras theme with lots of Cajun and New Orleans offerings.” Chautauqua County Fairgrounds, 1089 Central Ave., Dunkirk, N.Y. 14048, 800/965-4800, agcwinefestival.com

There is something about the beautiful, haunting, unforgettable sound of a pipe band that makes grown men weep and mesmerizes listeners of all ages. Seven bagpipe bands, including two from Ohio — the 87th Cleveland Pipe Band and the Lochaber Pipe Band — perform at this year’s ninth annual Jamestown Regional Celtic Festival and Gathering of the Clans. Add nine Celtic bands, as well as Scottish and Irish dancers, and you have a lot of wind, fancy footwork and fun.

“Spectators come for the pageantry and food, including fish and chips and shepherd pies,” says drummer Doug Clark, president of 96th Highlanders Pipes and Drums, which sponsors the festival. “History experts will also talk about clans and family heritage. Twenty-one clans will be there.”

Keep an eye out for the 27 competitors in the Jamestown Highland Games Heavy Events, one of the Irish festival’s main spectator draws. Athletes will be heaving giant stones, Scottish hammers and cabers.

The celebration begins the Friday evening before the event with a Kickoff Party that features a beer-and-wine garden and Celtic music. Mayville Lakeside Park, state Route 394, Mayville, N.Y. 14757, 96thhighlanders.com/festival.html