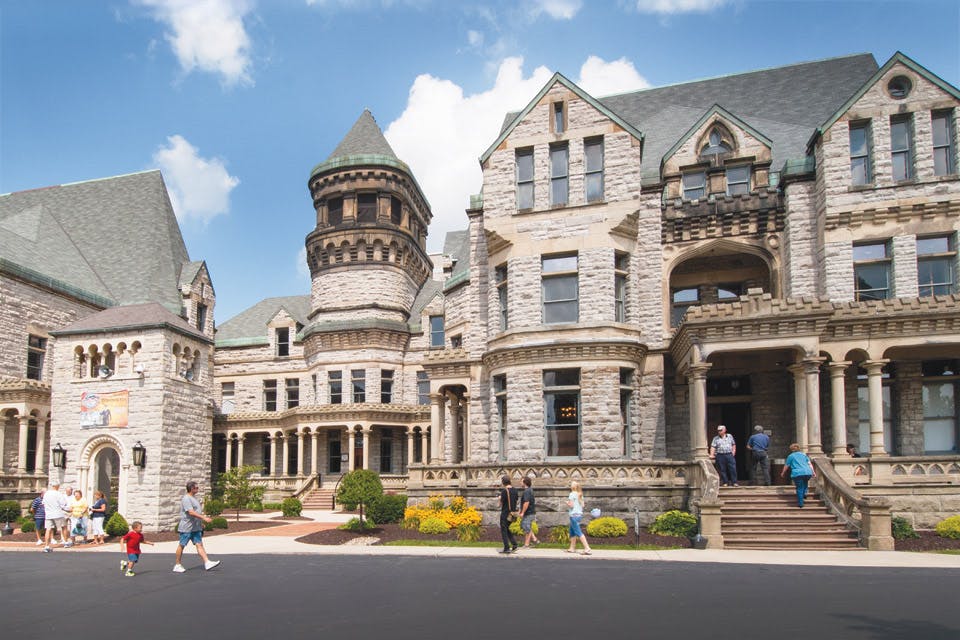 Walk in the footsteps of Andy and Red by visiting these sites immortalized in the 1994 film “The Shawshank Redemption.”

More than 155,000 men were incarcerated here between 1896 when the prison opened and 1990 when it closed. Built by Levi T. Scofield, a Cleveland architect famous for his Romanesque detailing and Gothic overtones, the building is part cathedral, part castle Dracula.

So it’s no wonder Hollywood chose the imposing edifice to serve as the main setting for “The Shawshank Redemption.” Nominated for seven Oscars and adapted from a Stephen King novella, the 1994 film stars Tim Robbins and Morgan Freeman as prisoners who forge a friendship based on keeping hope alive in the face of what seem like insurmountable odds.

The Mansfield landmark is one of 14 filming locations along The Shawshank Trail, which stretches from Upper Sandusky to Mansfield to Ashland (get information about them all at shawshanktrail.com). Here are five favorite stops along the route.

1. Shawshank Workshop: This former mill was chosen for the film’s prison workshop where inmates stop in their tracks, transfixed by a recording of Mozart’s “The Marriage of Figaro” emanating from the public address system. “When visitors come here and talk about the scene, it brings tears to their eyes,” says site manager Bill Mullen. Now a museum dedicated to the movie, the space is filled with saws and sanders glimpsed in the film, vintage autos, the prison bus featured on screen, costumes and autographs. 226 S. Eighth St., Upper Sandusky 43351, 419/835-5163, shawshanktrail.com

2. Andy's Conviction: Dedicated in 1900, the Wyandot County Courthouse is where Andy Dufresne is found guilty of murder. Focal points include the gray walls and white pillars that served as the backdrop to Andy’s torment on the stand, as well as a marble staircase, murals of the four seasons and a stained glass dome topped by a statue of Lady Justice. “The courthouse is something right out of the 1940s,” says site manager Bill Mullen. “The design makes it perfect for the time period in which the film is set.” 109 S. Sandusky Ave., Upper Sandusky 43351, 419/835-5163, shawshanktrail.com

3. Shawshank Prison: Each month, more than 2,000 tourists make a pilgrimage to the Ohio State Reformatory, which served as the film’s prison. Visitors snap photos of the stall where a combination of dry ice and spray from fire hoses was used to replicate a steamy shower, and line up to peer through the sewer pipe that led to freedom, marveling at the fact that the cylinder is only 15 feet long and made of plaster of Paris. “People are blown away by the authenticity of this structure,” says Ohio State Reformatory deputy director Mary Kennard. “It’s a very visceral experience.” 100 Reformatory Rd., Mansfield 44905, 419/522-2644, mrps.org

4. Opening Scene: Built in the 1940s by Mansfield resident Jim Pugh, the cabin in Malabar Farm State Park is known from the opening scene of “The Shawshank Redemption,” during which Andy Dufresne believes his spouse is having an affair. The cabin is not open for tours, but visitors are invited to take selfies next to the electric lampposts near the driveway that are featured in the film. “The movie has become a pop classic everyone seems to connect with,” says Siera Marth, assistant park manager. 4050 Bromfield Rd., Lucas 44843, 419/892-2784, shawshanktrail.com

5. Maine National Bank: This bank building is where Andy Dufresne squirrels away a tidy sum for the lifestyle he dreams of attaining. Tourists periodically stop by to see the marble floors, granite walls and tellers windows featured in the film. “People are drawn to this movie because the majority of us have never been in prison or put in the situation Andy was,” says Macy Vogel, director of Insurance Operations and Client Services for the Crosby Advisory Group, the firm now headquartered there. 19 W. Main St., Ashland 44805