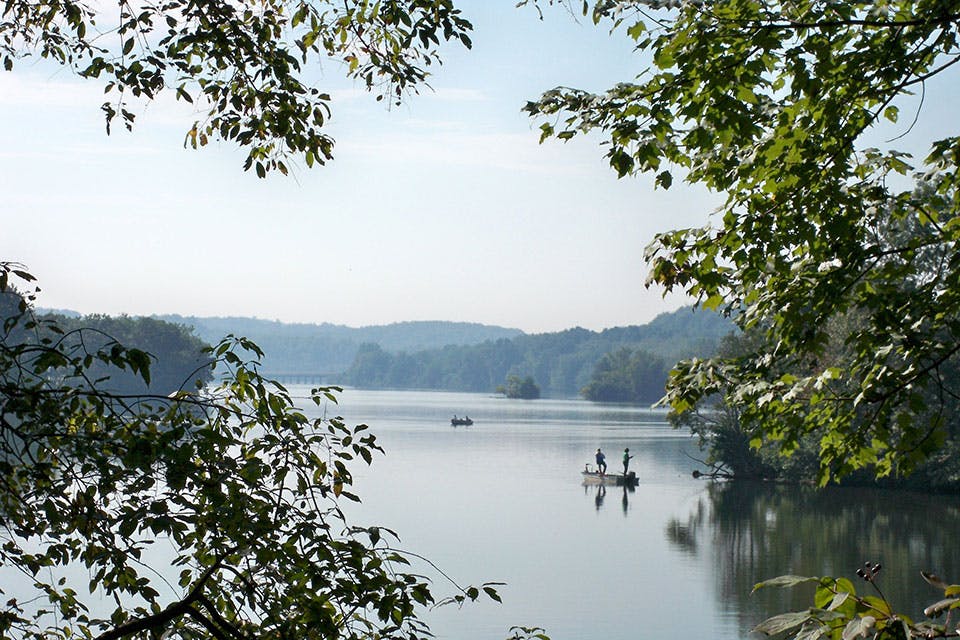 Western Pennsylvania caters to a range of tastes, whether you want to explore rural living or downtown destinations.

Wide Open Spaces
Moraine State Park spans more than 16,000 acres, making it one of the largest in western Pennsylvania. Visitors flock to its focal point, the 3,000-acre Lake Arthur. Home to two marinas, the lake is a popular spot for fishing and windsurfing. The park also contains a stretch of the North Country Trail, a 4,600-mile path that passes through seven states as it stretches from New York to North Dakota. Park manager Dustin Drew says the trail also connects with the neighboring McConnells Mill State Park. “We’re working with the North Country Trail and some other groups to make it more of a greenway that will carry that trail from one park to the next,” he says. “To have that run through both of the parks we oversee is certainly unique.” 225 Pleasant Valley Rd., Portersville, Pa. 16051, dcnr.state.pa.us 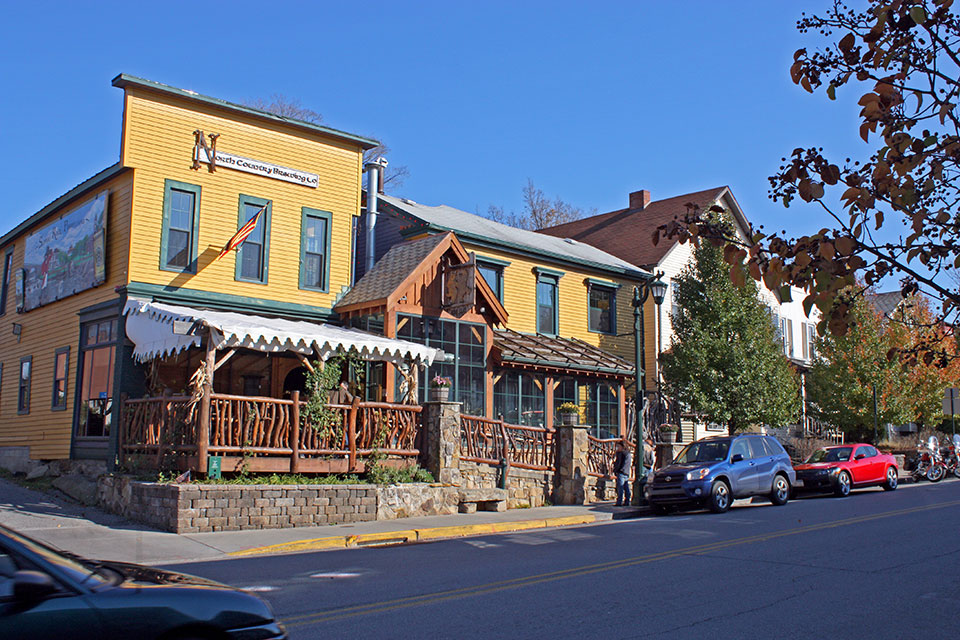 Eats and Ale
The North Country Brewing Co. calls itself an “eatery, brewery and community center,” and it actually emphasizes being a family restaurant as much as it does being a place to enjoy great craft brews. Front-of-the-house manager Harrison Callahan says the restaurant tries to keep everything as fresh and local as possible. “We believe in farm-to-fork, so we actually own a 64-acre farm where we raise our own cattle,” he says. “We feed them the leftover grain from all the beer we make. So we try to be as sustainable as possible. We try to keep everything we do representative of western Pennsylvania.” But the beer by no means takes a back seat here. Callahan says that although microbreweries are popping up throughout the area, North Country is trying to educate visitors on “what good beer really is.” 141 S. Main St., Slippery Rock, Pa. 16057, northcountrybrewing.com 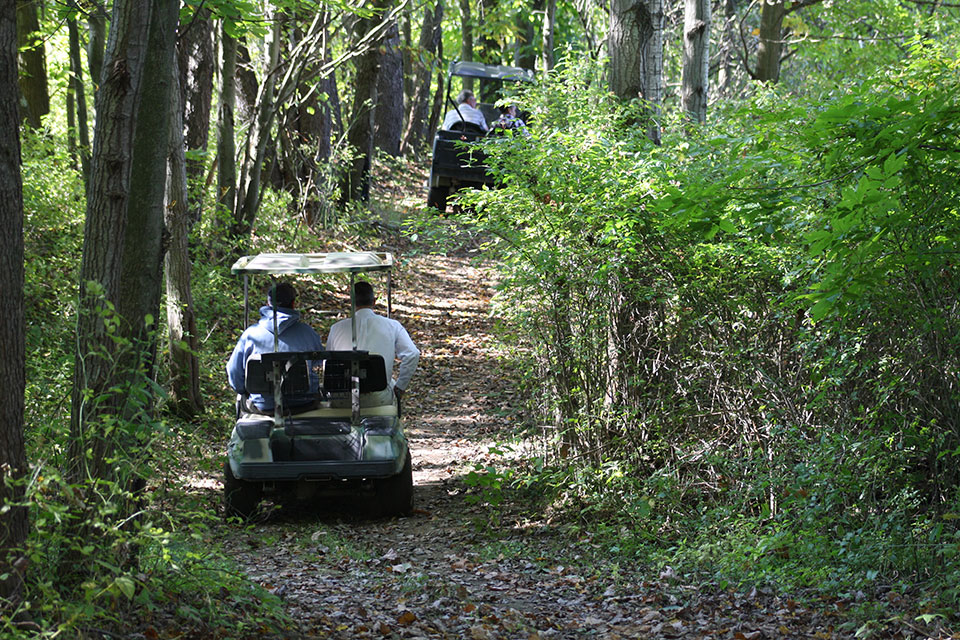 Connected to the Spring Valley Golf Club, Hell’s Hollow Wildlife Adventure trail invites visitors to head out on foot or in a golf cart with trail-friendly tires.

Sense of Adventure
A day of exploring at Hell’s Hollow Wildlife Adventure Trail treats visitors to waterfalls, beaver dams, deer, wild turkey and maybe even an eagle sighting or two. Visitors are free to bring a picnic lunch or even grab a cooler and take a couple beverages from the nearby Spring Valley Golf Club onto the trail. For those who want to head out on four wheels, Hell’s Hollow offers camouflaged, modified golf carts with better suspension and trail-friendly tires, meaning that just about anyone can get out and explore. “There are a lot of families that come to walk through with their children,” says co-owner Jean Mills. “Grandmas and grandpas bring their grandchildren. We have some hills and have some rocks, but we do get a lot of seniors [who visit].” 496 Bestwick Rd., Mercer, Pa. 16137, hellshollowwildlifeadventuretrail.com

Educational Experience
A reminder of Mercer County’s agricultural past, Munnell Run Farm embraces education with its expansive 163-acre outdoor classroom. The nonprofit agriculture and ecology education center has offerings that range from preschooler to adult and works to give its visitors an appreciation for the world around them. “What we’re trying to do is teach people of all ages the close relationship that farming and the environment have,” explains Mercer Conservation District manager Jim Mondok. Visitors can take part in basket weaving or geocaching, learn about streams, trees or flowers, or visit the farm’s historic Bigler House, which was originally built in 1843, to learn about 19th-century rural living. “There are not very many outdoor centers that have the agricultural and aquatic and woodland and open-field assets that tie everything together,” Mondok says. “Agriculture is sort of our niche.” 747 Greenville Rd., Mercer, Pa. 16137, munnellrunfarm.org

Simple Living
While most consider Lancaster as Pennsylvania’s Amish home, another view is available in Lawrence County. Susan Hougelman’s Simple Life Tours provides visitors a glimpse of the “strict, disciplined, old-world Amish” who reside there. Businesses and homes rely on oil lamps, and buggies are a common sight on roads throughout the area. Since last year, Simple Life Tours has offered outsiders a glimpse of the “beautiful way of living” Hougelman has become so passionate about. Her tours are billed as noncommercial and respectful of the Amish homes and businesses they visit. “I absolutely believe that as our world gets busier and faster and darker, and families are broken up and [we continue to live] in a fast-paced world of technology, people are attracted to that good old-fashioned way of life,” she says. 108 N. Market St., New Wilmington, Pa. 16142, simplelifetours.com 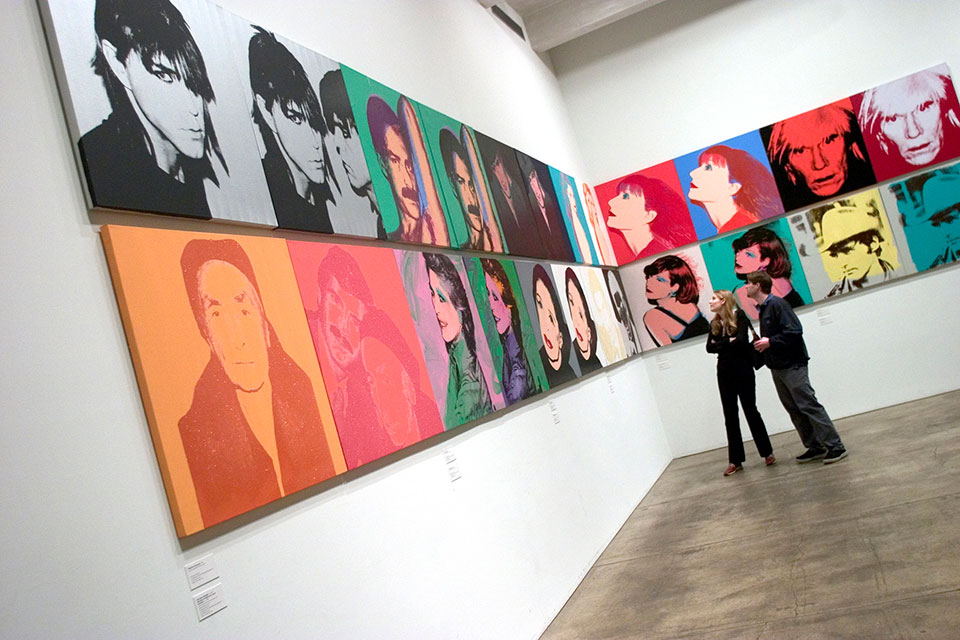 Pop Cultured
The Andy Warhol Museum is one of Pittsburgh’s most popular museums. But now, even those who have already visited the downtown spot honoring the iconic pop artist have a reason to come back. For the museum’s 20th anniversary, the space has been renovated and redesigned, and the layout has changed to reflect a chronological journey through Warhol’s life. Nicholas Chambers, the museum’s Milton Fine curator of art, says the renovation provides a completely new experience that tells the story of Warhol’s work and life. “Guests now go straight to the seventh floor and arrive in Pittsburgh in the 1920s,” Chambers says. “So we really establish that particular environment for Warhol’s childhood, which is very much rooted in Pittsburgh.” Through Aug. 18, the Warhol features “Halston and Warhol: Silver and Suede,” a collaborative exhibit focusing on designer Halston and his work, as well as some of his contemporary works and collaborations with Warhol. 117 Sandusky St., Pittsburgh, Pa. 15212, warhol.org

Food Flight
To get a true taste of Pittsburgh cuisine, Sylvia McCoy says you’ve got to dig a little deeper than tourist fare. The ’Burgh Bits & Bites Food Tour founder says she focuses on “hidden, historic and culinary treasures.” Guests learn the history of each location while making their way through one of five city neighborhoods: Brookline, Bloomfield, Dormont, Lawrenceville and the Strip District Market. Tours accommodate nearly 50 people and usually contain five or six tastings, or basically enough food to leave you feeling pleasantly full after the progressive food adventure, according to McCoy. “I always say I want people to have a ‘wow’ experience,” she says. “We’re so inundated with material things, that when you have a great biscotti or a great pasta dish, you say ‘wow,’ and you really remember it. That’s what the tour is meant to be.” Various starting locations, Pittsburgh, Pa., burghfoodtour.com