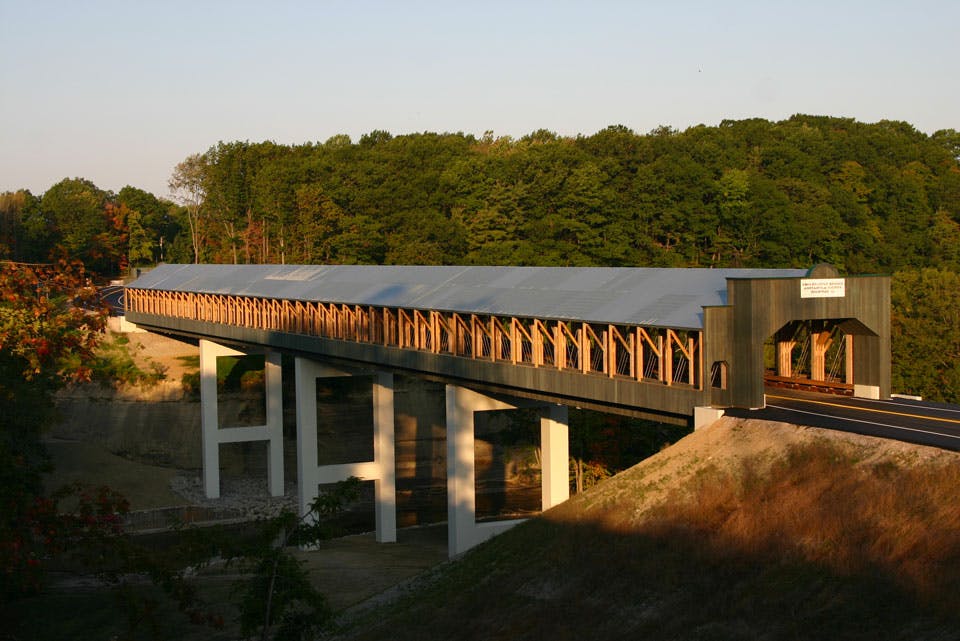 Visit the home of the shortest and longest covered bridges in the United States.


Eighteen covered bridges dot Ashtabula County, with the oldest dating back to 1867. It’s a proud heritage celebrated annually during the Ashtabula County Covered Bridge Festival, set this year for Oct. 10 and 11. The county seat of Jefferson is the epicenter of the music, activities and eats, but visitors will want to grab a map and hit the road to check out the bridges for themselves and take in all the festival has to offer.

The Festival: Most events take place in Jefferson, including a pancake breakfast, classic car show and live music. Children can enjoy craft making, bounce houses and a magician. But this is only part of the fun. Visitors should tour the covered bridges, many of which will also feature food, activities and entertainment. “It is a countywide event,” says Ginger Whitehead, the executive director of the festival committee. “It is unique in the fact that it is going on at 16 or 17 different places at once.”

The Bridges: Ashtabula County’s 18 covered bridges, six of which were built during the last three decades, range from 11 feet to 613 feet in length, making the county home to both the shortest and the longest covered bridges in the United States. “Our former county engineer was very interested in preserving the ones we had and building new ones,” says Whitehead.

The Legacy: A primary goal of the festival’s organizers is to teach the history and importance of the bridges to the younger generation. “We have been trying to focus more on youth activities,” Whitehead says. “We need young people to come and be interested to keep it going.”