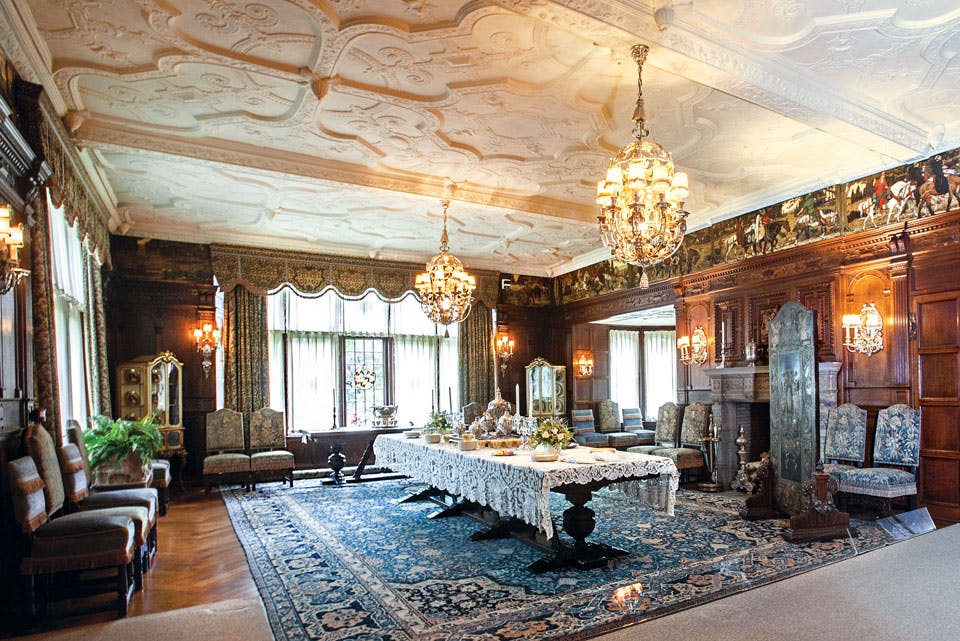 We look at some of the Stan Hywet Hall & Gardens details a casual observer might miss.

Of course there is a secret passageway. What self-respecting mansion would be built without one? The hidden corridor inside Stan Hywet Hall & Gardens’ Manor House discretely connects the home’s stately library to a three-story Great Room. The door on the library side is hidden in a bookshelf, among the almost floor-to-ceiling collection of leather-bound books, black walnut paneling and artistic lighting fixtures.

“The door was probably something [the owners, Goodyear Tire & Rubber Co. co-founder F.A. Seiberling and his wife, Gertrude,] saw in England on their 1912 trip and thought it was clever,” says Julie Leone, director of museum services and curator, adding she has never seen blueprints or correspondence from architect Charles Sumner Schneider that shed light on the passageway’s origins.

For 40 years, the American country estate in Akron was home to the Seiberlings and their children. During that time, it served as a gathering place for artists, musicians, actors, businessmen and politicians. This year, Stan Hywet Hall & Gardens is celebrating its 100th anniversary, and walking through the home, it seems one could spend a century learning the story behind every painstakingly chosen architectural detail and artwork that has contributed to the beauty and grandeur of the 64,500-square-foot, Tudor revival-style estate.

Some of the features of the 65-room mansion are instantly apparent — the massive sandstone fireplace in the Great Room, for example — while others are subtler. Here’s a look at some impressive details a casual visitor might miss. 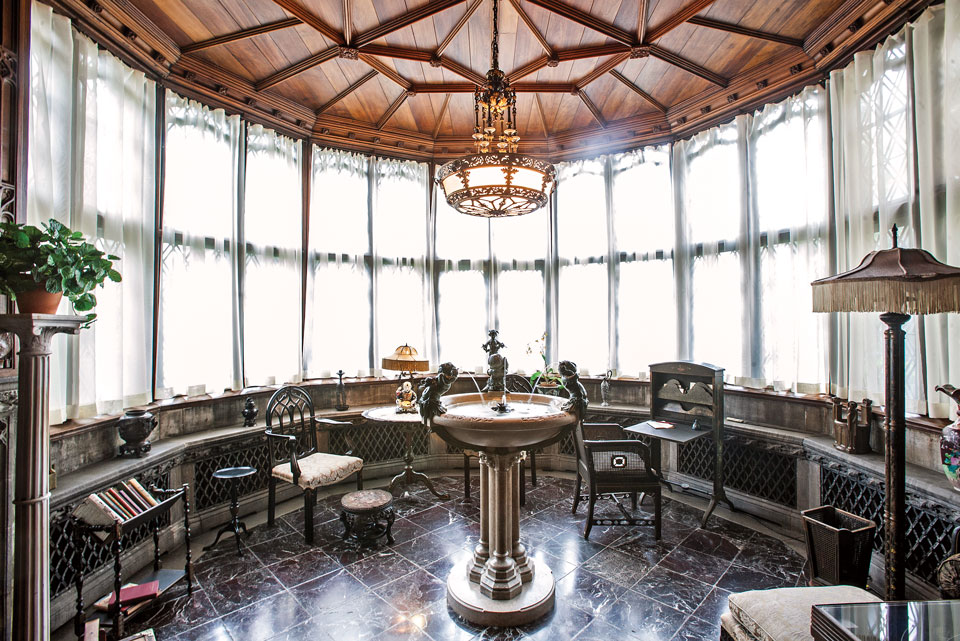 
Sound Raves
The route of the standard tour of the house, which was built between 1912 and 1915, has been changed this year to include the domed Round Room, a receiving area just outside the magnificent Music Room, which was the site of many boisterous performances and parties when the Seiberlings lived here. The acoustics in the Round Room make it easy for people to hear one another when standing directly under the chandelier in the middle of the space. It provided Gertrude Seiberling a place to welcome her party guests without having to shout. “Your voice is carried up, amplified by the dome and returned to the center of the room,” explains Leone.

Kids’ Stuff
The third-floor nursery is open to visitors for the first time this year. “It was probably originally a room used by servants because of the call box and telephone in the room,” says Leone. The [Seiberling] grandchildren recall using the space as a playroom and for taking naps, so it [became] a more informal nursery.” The wallpaper depicts illustrations of children who resemble the Campbell Soup kids sledding and ice skating. Leone says the A.L. Diament & Co. billed the Seiberlings $7.23 for 50 rolls of what was likely French-designed wallpaper.

Water & Light
Two indoor fountains provide the Manor House with the delightful and soothing sound of running water. The first is in the Solarium, a light-filled space with a curved wall of windows. The marble fountain near the center of the room features three putti — artwork of cherub-like, nude, chubby young males often associated with leisure and mirth — spouting water. The room was used for playing parlor games and even included an electric card-shuffling table. “This room has a repeating double-diamond pattern in the paneling and other surfaces,” says Leone. “It was well thought out.”

The West Porch was designed to make guests feel as if they were outside in a garden no matter the time of year. Its wall fountain was designed and manufactured by ceramic artist Mary Chase Perry Stratton of the Pewabic Pottery Co. in Detroit. Based on the poem “The Well of St. Keyne” by Robert Southey, the ceramic mural and fountain tell the story of a bride who outsmarts her husband and becomes head of the household.

“We don’t know why or if the Seiberlings … chose this poem or if it was chosen by the architect. But this was always a lovely space,” says Leone.

Dinner Guests
They are all here: the Wife of Bath, Friar, Pardoner, Yeoman, Knight, Miller, Cook and other main characters who appear in Geoffrey Chaucer’s The Canterbury Tales. They appear in a decorative horizontal band known as a frieze that is mounted on all four walls near the dining room’s ceiling. The canvas mural was painted by American artist Robert Van Vorst Sewell. With a dining room that can seat up to 60 (it currently houses a table set for 14 with silver, crystal and fine linens), it is easy for visitors to overlook the mural. “If you look closely, you will also see [a figure] who is supposed to represent Robert Sewell, who painted himself into the mural,” says Leone.

Finishing Touches
It’s said a home’s door handles, hinges, latches and locks are its jewelry. For these small but noticeable details throughout the home, the Seiberlings chose one of the best forged-iron craftsmen of the 20th century. Beautiful and functional work made by Samuel Yellin of Philadelphia is found throughout the estate, starting with the front gates and front door. “Yellin also did the radiator covers in the principal rooms on the first floor … and the family bedrooms,” says Leone. Decorative room keys made by Yellin are also on display specifically for this anniversary year.

Creative Spaces
If you’re interested in seeing more art during your visit to Akron, put these two stops on your travel itinerary.

Akron Art Museum
Photographer Sandy Skoglund’s “The Revenge of the Goldfish” is one of the photos appearing in “Staged.” The exhibition, which runs through Sept. 27, features elaborately composed photographs from the museum’s collection. “The artists direct, design sets for and often act in their own productions,” says Akron Art Museum assistant curator Elizabeth Carney. “Their subjects are not simply present, but engaged as performers. The resulting images are often as theatrical as a Broadway play or Hollywood film.” 1 S. High St., Akron 44308, 330/376-9186, akronartmuseum.org