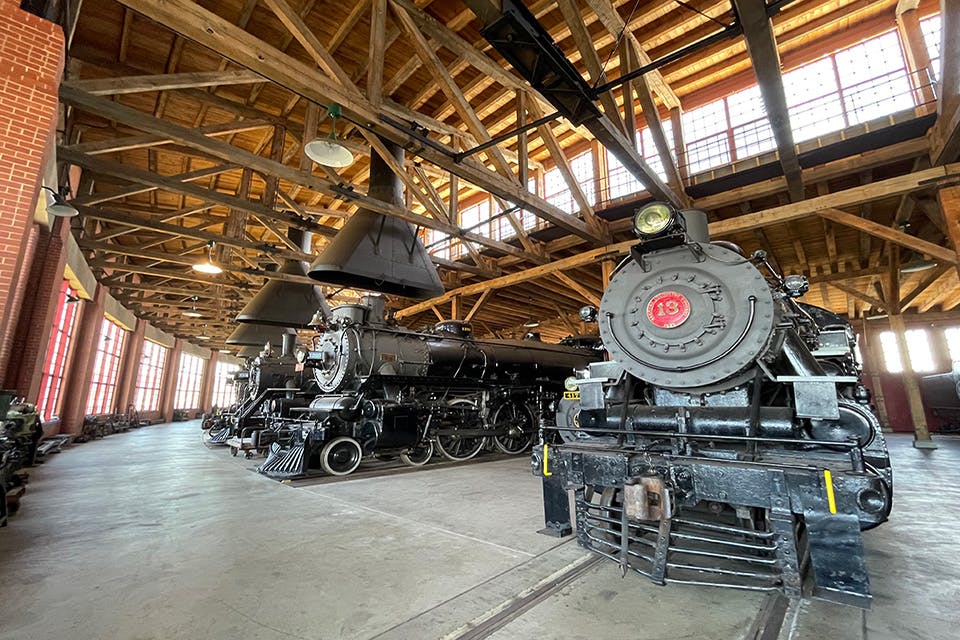 This Tuscarawas County destination provides guided tours that offer a walk through the glory days of railroads.

Some people collect model trains. Other people collect real ones. Jerry Jacobson was the latter. After selling his 525-mile freight railroad in 2008, he kept his collection of old equipment, including his steam locomotives.

To protect and preserve them, he bought 34 acres of land in Tuscarawas County. He then built 2 miles of storage tracks, as well as other amenities, including a 115-foot train turntable and a full-size roundhouse, historically where locomotives were repaired and maintained.

Although Jacobson saw the completion of the roundhouse’s construction, he did not live to see the Age of Steam Roundhouse Museum as it exists today — filled with his collection of steam locomotives (as well as others that have been acquired since), which are beautifully presented and lovingly cared for by the museum’s staff and volunteers. Rolling stock, passenger cars and other pieces from his collection are displayed outside.

“This was not patterned after any singular building of its kind,” says Dan Condo, visitor services coordinator at the Age of Steam Roundhouse Museum. “What Jerry and his associates did was travel around to other existing roundhouses that were still standing at the time, as well as scour blueprints and photographs of other such buildings, and handpick aspects he liked and put them together to make this place.”

The 22 steam locomotives housed in the 18 roundhouse bays span from 1897 to 1948. Only one of the steam engines is currently operational, while many of the others have been restored to how they looked during their prime. Scheduled 90-minute group tours allow visitors to learn about the collection. (Longer, more in-depth options are available, too.) Tours travel through the roundhouse, onto the property and into the back shop.

“We are a museum but, in all reality, we are an industrial facility, because the preservation and restoration work continues five days a week,” Condo says. “So even as tours are going on, we have staff working all around. That’s why we do guided tours specifically, so we can keep the group together … and make sure the group is safe.”