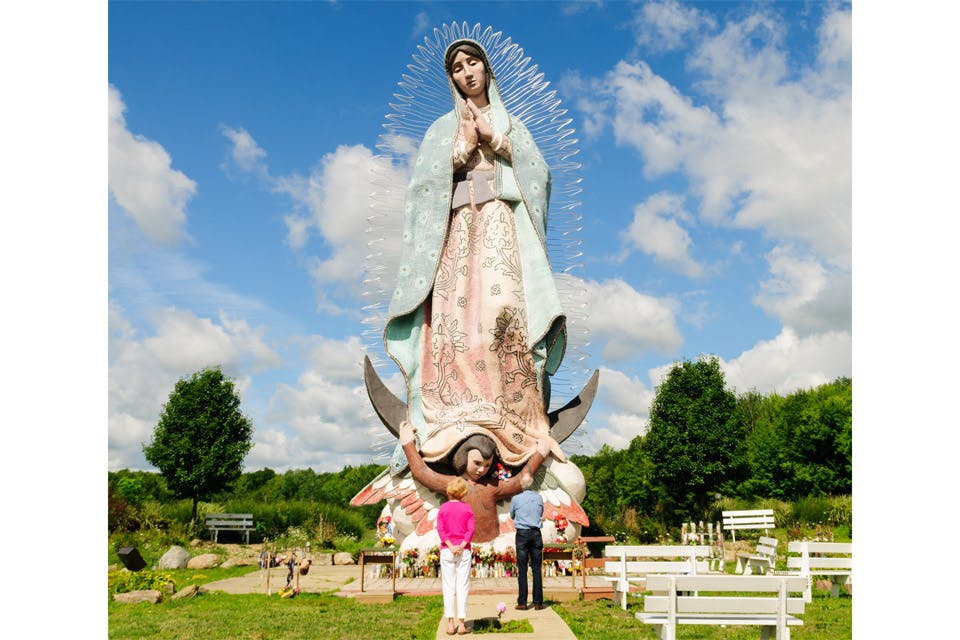 World’s Tallest Our Lady of Guadalupe

This 50-foot-tall statue in Ashtabula County watches over the countryside.

May 2017 Issue
BY Frances Killea | Photo by Ohio Images

May 2017 Issue
BY Frances Killea | Photo by Ohio Images

Ed and Patricia Heinz were living in Great Britain with their seven children when their then-four-year-old son Carl sat down in front of a Nativity scene at church. When the boy wandered back to find his parents, he told them about a conversation he’d had with the Virgin Mary.

“She told me to go back to the farm and wait,” Ed Heinz recalls his son saying. What could have been explained as a child’s musings resonated with the couple. “[Pat] said, ‘I believe him.’ I said, ‘Something’s going to happen.’ ”

The farm was a 50-acre property in Windsor, Ohio, that the family had bought and then lost several years before Heinz took an engineering job in the United Kingdom.

Eventually, the Heinzes bought the land back with the intent to create a center for gathering and giving thanks. Now home to the nonprofit Servants of Mary Center for Peace, the property is under the watchful gaze of a 50-foot-tall depiction of Our Lady of Guadalupe — said to be the tallest in the world. Richard Hyslin, then a professor at the University of Texas in McAllen, built the statue.

Hyslin offered to work for the price of the materials, and over the course of the next two years, he built the statue in parts, using rebar, concrete, wire mesh and metal. After that, it took more than a month to assemble the pieces and another 90 days to place the painted tiles covering the statue prior to its dedication in 1995.

Since the construction of the Our Lady of Guadalupe statue, the Heinzes, who now sit on the Servants of Mary Center for Peace’s board of directors, have welcomed guests to experience what is often described as a profound sense of peace in its presence. Some travelers even attribute personal miracles to their visits.

“I’m careful not to dwell on the miracle aspect,” says Heinz, “but the stories are so beautiful.”