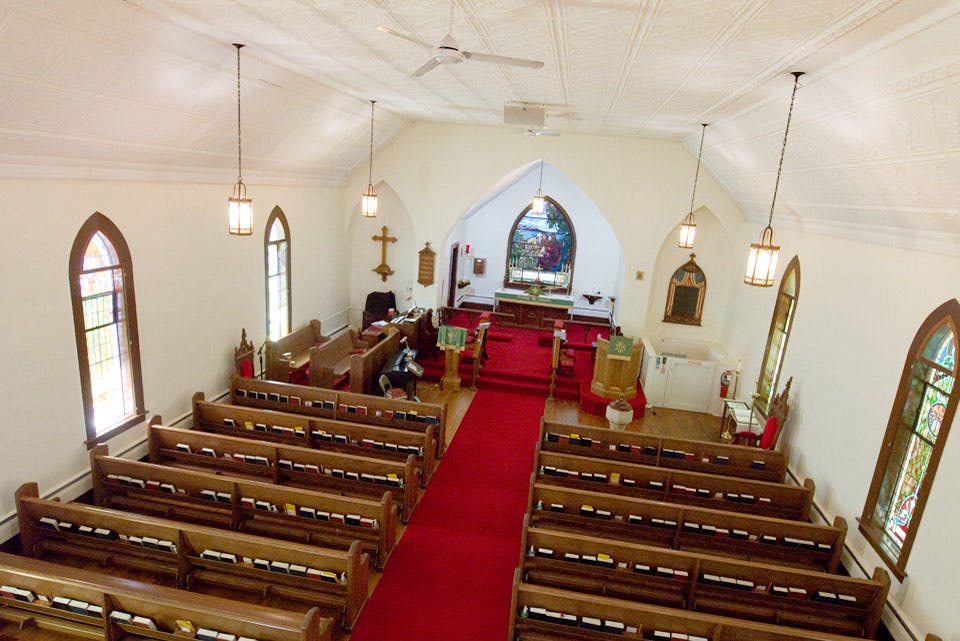 Civil War hero Gen. William Tecumseh Sherman’s steam-powered ship neared Gibraltar Island around dinnertime on Sunday, June 17, 1866. He was there to see Jay Cooke, the Philadelphia banker and Sandusky native who owned the tiny Lake Erie island and had helped the Union to victory by selling war bonds.

Already a celebrity in the North, Sherman had been sure of a warm reception from Cooke and his family, but the flags on the island remained lowered as his vessel entered the bay.

Once Sherman’s ship anchored, he and several officers were rowed to the Gibraltar Island dock in a smaller boat. Still, there was no visible response from the occupants inside as the general approached the stately stone residence known as Cooke Castle.

The housekeeper greeted Sherman and his party at the front door, but the home’s namesake and his family were nowhere in sight. Sherman did not anticipate that his visit would offend the deeply religious Cooke by disturbing what was traditionally a quiet day of prayer and reflection in his devout Episcopalian household.

Cooke and his family ultimately gave in, offering a tour of the island to their guests, who departed after a three-hour stopover. However, Cooke was bothered enough by Sherman’s intrusion on his Sunday that he noted it in the Gibraltar Record, a journal he kept during the time he spent at his summer home located just a few hundred yards off South Bass Island’s shoreline.

“Deeply regretting that it was the Sabbath we yet felt it a duty & a pleasure to extend our warmest hospitality to the great Warrior & his noble companions … ” Cooke wrote. “Why is it that the grave duty & rich pleasure of keeping sacred the ‘Lords day’ is almost wholly unknown amongst the Warriors & Statesmen of our Country?”

As a skilled banker, Cooke had ama­ssed a fortune, but his faith guided him. He led well-attended Bible-study sessions at his Philadelphia home, and he used his influence and wealth to help finance the construction of churches in Philadelphia and Minnesota, as well as South Bass Island’s Put-in-Bay.

That unwavering faith still binds Cooke to the island today, where its first house of worship and one of the oldest in Ohio — St. Paul’s Episcopal Church — is still sharing God’s word in the same little wooden building that Cooke helped build more than 150 years ago.

Inside the little white structure with the red door, St. Paul’s Episcopal Church’s 43 members worship in a place that hasn’t changed much since the Sundays when Cooke sat in the pews. The stamped-tin ceiling — a common architectural feature at the time the church was built — is still there, although it is now painted white. The historic stained-glass windows, most of which were added after Cooke died and are dedicated in honor of influential parishioners and organizations, are the most ornate feature.

Although the plain wooden pews offer plenty of space, the sanctuary is small, giving the services an intimate feel. The organ is at the front of the church with the organist sitting among the congregation. The simple setup was by design. It is how Cooke and the islanders who worshipped at the church wanted it. St. Paul’s is an example of what is known as “low church,” meaning the sanctuary has few, if any, elaborate touches so the parishioners’ focus is on worship rather than their surroundings.

“Jay Cooke had the ability to inspire people wherever he went,” says the Rev. Mary Staley, who has been the priest at St. Paul’s Episcopal Church at Put-in-Bay since 2010. “We have essentially met every Sunday in this space since October 1865. Jay Cooke is the catalyst.”

South Bass Island’s population grew in the 1860s thanks to its access to good fishing — one of the reasons Cooke loved his nearby Gibraltar Island — and its reputation as a fertile spot for vineyards. The islanders, who totaled around 1,000 people at that time, felt there was a need for a church on South Bass Island. The residents had already raised $150 toward the construction of one when Cooke bought a plot of land for the church on Catawba Avenue — a short walk from downtown Put-in-Bay — in spring 1865. He also contributed the majority of the building’s construction budget, which Staley estimates was $3,000.

While the church was being built, the congregation had services in the village schoolhouse, which was located behind what is today the Goat Soup & Whiskey tavern. In October 1865, St. Paul’s Episcopal Church held its first service. Cooke attended with former U.S. treasury secretary Salmon Chase, who had been visiting Gibraltar Island.

“What a blessing this Church is to the Island people,” Cooke wrote in the Gibraltar Record in 1866. “God is appreciated by so many & has thus far prospered nobly.” 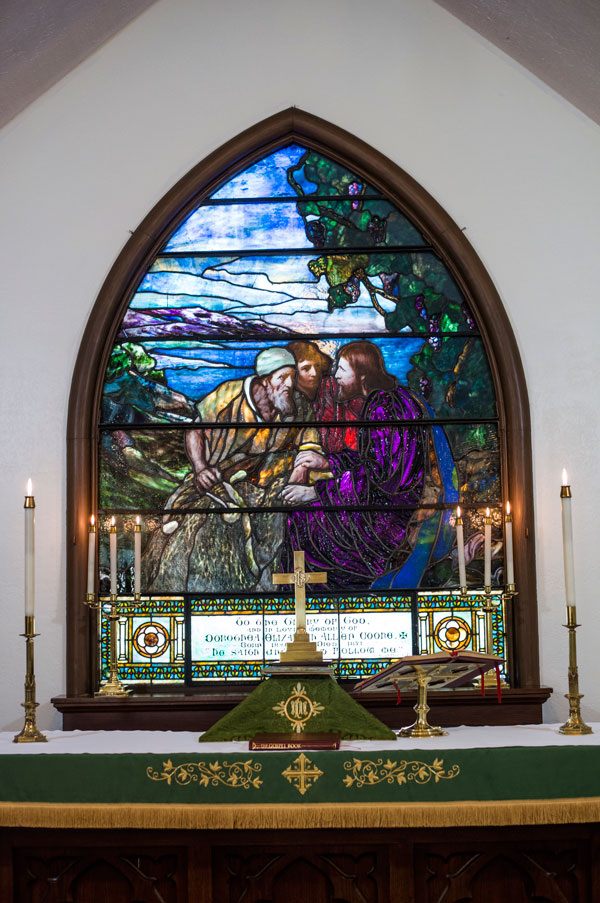 The wooden church is not far from downtown Put-in-Bay. A stained-glass window inside depicts Jesus talking with Peter and Andrew. (photo by Jonathan Miksanek)

During his summers at Gibraltar Island, Cooke would invite clergy from many Protestant denominations to vacation at his home, so they could discuss theology and share ideas for improving their respective congregations.

“He was having ecumenical meetings without really trying to,” Staley explains. “They would choose among themselves who would preach here that Sunday. That was very unusual and would still be considered unusual today.”

Cooke, who had connections to Episcopalian seminaries, also assisted in recruiting priests and sometimes helped financially support and advise them. He paid to paint and carpet the church rectory, which has since been torn down and replaced by a more modern home for the priest. He also provided about 25 percent of the church’s annual funding, which Staley says was less than $1,000 a year, until he went bankrupt in 1897. (Always resilient, Cooke later regained his fortune.) The islanders came up with the rest of the money for church operations.

Cooke’s housekeeper, Anna McMeens, ran the Sunday school at St. Paul’s, which had about 150 participants — an impressive number for an island and a reflection of good church attendance, according to Staley.

“Anna was here every Sunday,” she adds. “When she wasn’t at Gibraltar, she lived in a house four doors down from the church. She would keep Jay informed about what was going on at the church while he was away.”

The large stained-glass window at the front of St. Paul’s — the biggest in the church — bears the inscription, “To the glory of God, and in loving memory of Dorothea Elizabeth Allen Cooke.” Cooke’s daughter, Laura Cooke Barney, donated it in 1902 as a tribute to her late mother.

The window depicts Jesus speaking with Peter and Andrew, who are holding nets, and illustrates Matthew 4:19, where Christ told the two fishermen: “Come, follow me, and I will make you fishers of men.” Designed by F. D. Sweeney — a woman who created many stained-glass windows in Protestant churches in Philadelphia — it pays homage to the island’s history as a vineyard and a fishing village with its prominent depiction of nets and grapes. A Bible on display near the front of the church remains open to Matthew 4:19.

Cooke died in 1905 at age 83 after a brief illness, but his church’s influence on island history continued on during the century that followed. When bodies of American and British soldiers who died in the Battle of Lake Erie during the War of 1812 were moved from their original resting place at South Bass Island’s DeRivera Park to the Perry’s Victory and International Peace Memorial on Sept. 11, 1913, Episcopal priests from around the country, including the priest at St. Paul’s, led the procession. 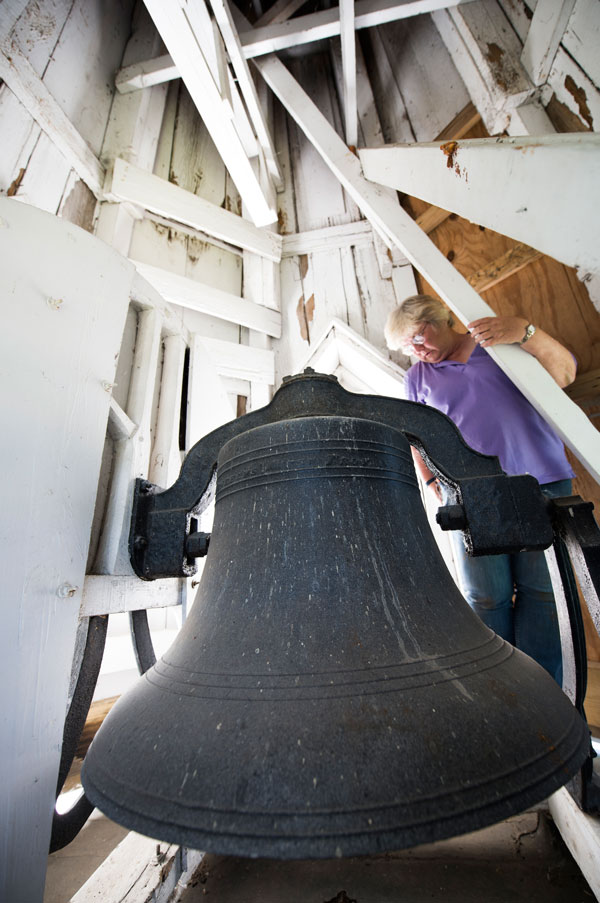 The Rev. Mary Staley (above) has been priest at St. Paul's Episcopal Church since 2010. This Meneely Bell was made in 1870 and added to the church in the 1880s. (photo by Jonathan Miksanek)

Two decades later, St. Paul’s started the first boys’ choir in the United States when it formed the Wa-Li-Ro Episcopal Choir Camp, after bishop of the Episcopal Diocese of Ohio Warren Lincoln Rogers (for whom Wa-Li-Ro was named) traveled to England and saw an all-boys choir perform there. The camp lasted for four decades, and more than 6,000 boys attended. Many well-known composers, choir directors and musicians, including Pulitzer Prize-winning composer Leo Sowerby and England’s Royal School of Church Music director Gerald Knight, led the choir over the years.

Although deeply rooted in island history, St. Paul’s continues to adapt with the times. It has made several upgrades over the years, including construction of the new rectory, renovating the steeple and, most recently, installing a labyrinth for prayer and reflection in 2011.

In some ways, the improvements are a reminder of Cooke and his optimistic attitude about St. Paul’s future. He wrote happily of seeing needed repairs made, good attendance and his hopes that the church would continue to fulfill its mission for years to come.

“I am cheered & delighted to find the church work prospering,” Cooke wrote in the Gibraltar Record during 1890. “I should never have doubted that God would fulfill his promise — that His Word should not return to Him void & I confidently expect He will soon pour out a blessing upon the Islands.” 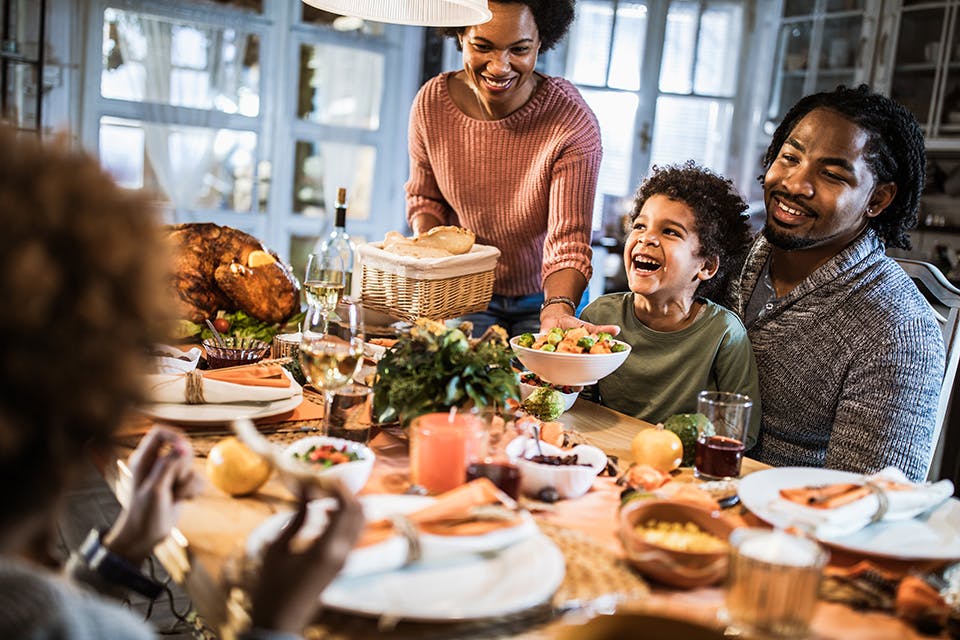