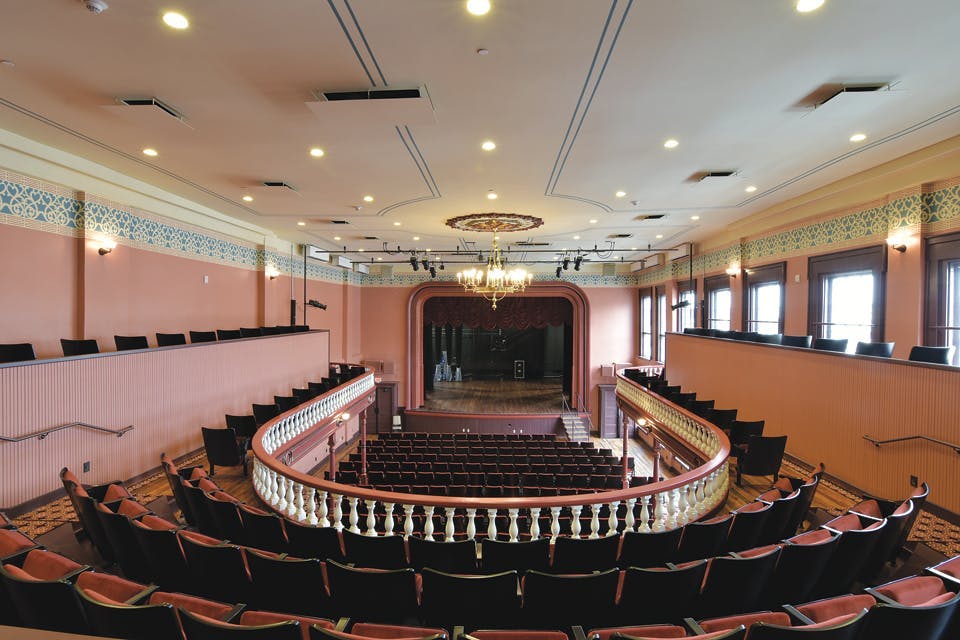 Billed as “America’s oldest authentic 19th-century theater,” The Woodward Opera House has been a landmark in downtown Mount Vernon since it opened in 1851, hosting theatrical performances and lectures that included a talk by President William McKinley.

But during the 1920s, audiences began gravitating toward more intimate venues, leading the opera house to ultimately fall into disuse and disrepair.

Thanks to a $22.5 million dollar restoration project funded by the Woodward Development Corp. and a host of other local donors and state and federal grants, The Woodward Opera House is a crown jewel once more. It reopened Feb. 9, 2019, with a concert by Grammy Award-winning country singer Kathy Mattea.

The idea to restore the theater was sparked in 1975 when the building was put on the National Register of Historic Places. In 1994, the Knox Partnership for Arts and Culture formed with the purpose of making the space vibrant again. The nonprofit Woodward Development Corp. was created three years later to purchase, refurbish, own and operate the facility.

“Almost every aspect of the opera house was painstakingly researched,” says Pat Crow, a founding member of Woodward Development Corp., who spearheaded the project and pored over old newspapers and photos to ensure design accuracy.

Original oil paintings by German artist Mathias Armbruster, who immigrated to Columbus in 1858 and became a master at crafting theatrical stage sets, will soon fill the lobby of the 492-seat theater. The works will hang against a backdrop of pastel and tan wallpaper, which replicates the original pattern. The chandelier is a reproduction of one that hung in the opera house during the 1880s.

Charissa Durst, president and owner of Hardlines Design Co. in Columbus, led the design team as head architect. She admits the assignment was challenging, right down to making sure the location of restrooms met with existing building code requirements.

“For 18 years, this project was a big part of our lives,” she says. “Life’s going to feel weird without it.”