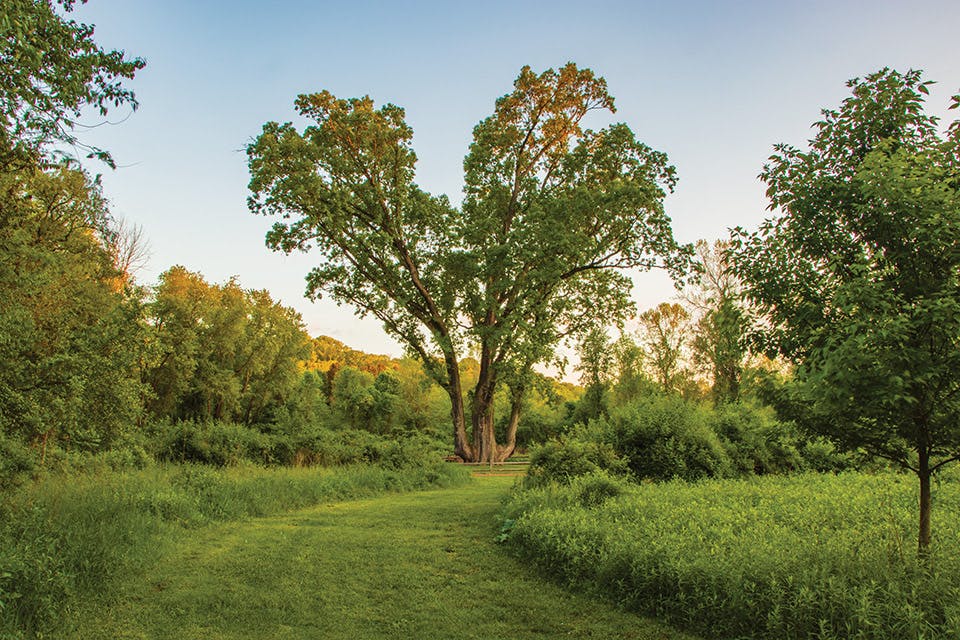 The Signal Tree at Summit Metro Parks’ Cascade Valley is impossible to miss with its three-forked trunk and height of 95 feet. Its name comes from the often-repeated tale that American Indians who lived in this part of what is today Summit County caused the tree to grow in its unique shape to serve as a way marker.

That legend is even outlined in a plaque attached to a stone that was placed at the foot of the tree in 1986. It claims that various tribes used the tree to get their bearings as they traveled toward the Ohio River: “They removed their canoes from the river here and carried them overland for eight miles — south to Summit Lake,” the inscription reads in part.

But Megan Shaeffer, cultural resource coordinator for Summit Metro Parks, says that the tree’s history is still a mystery. Since starting her job in 2016, she has looked for evidence that the burr oak actually held the significance that local lore has granted it. Although the plaque next to the tree claims it was used to mark the Portage Path, a route that linked the Tuscarawas and Cuyahoga rivers, the tree isn’t in the right place for that purpose.

“It’s closer to the Cuyahoga and Little Cuyahoga confluence,” Shaeffer says. “So, there’s a possibility it is a signal for a trail that linked those features, but it’s not placed in a way that’s intuitive, although we don’t know how people moved across the landscape.”

Signal trees, or trail trees, were once commonly used as landmarks. Shaeffer found an original mention of Summit County’s “Indian trail tree” in a 1942 Akron Beacon Journal article, although its location was not mentioned. Another article identifying the tree’s location appeared in a local newsletter in 1958, but Shaeffer says the article’s author was unsure of the tree’s purpose. When the shift from regular tree to local legend happened is hazy. It’s not even clear that the tree was modified and its unusual form may be natural, according to Shaeffer. What we do know is that the tree is between 300 and 350 years old, and that’s where the certainty stops.

“We’re always looking for more information about it,” says Shaeffer, adding that the mystery surrounding the tree will likely live on for generations to come. “It has become a beloved part of Cascade Valley and Summit Metro Parks.”