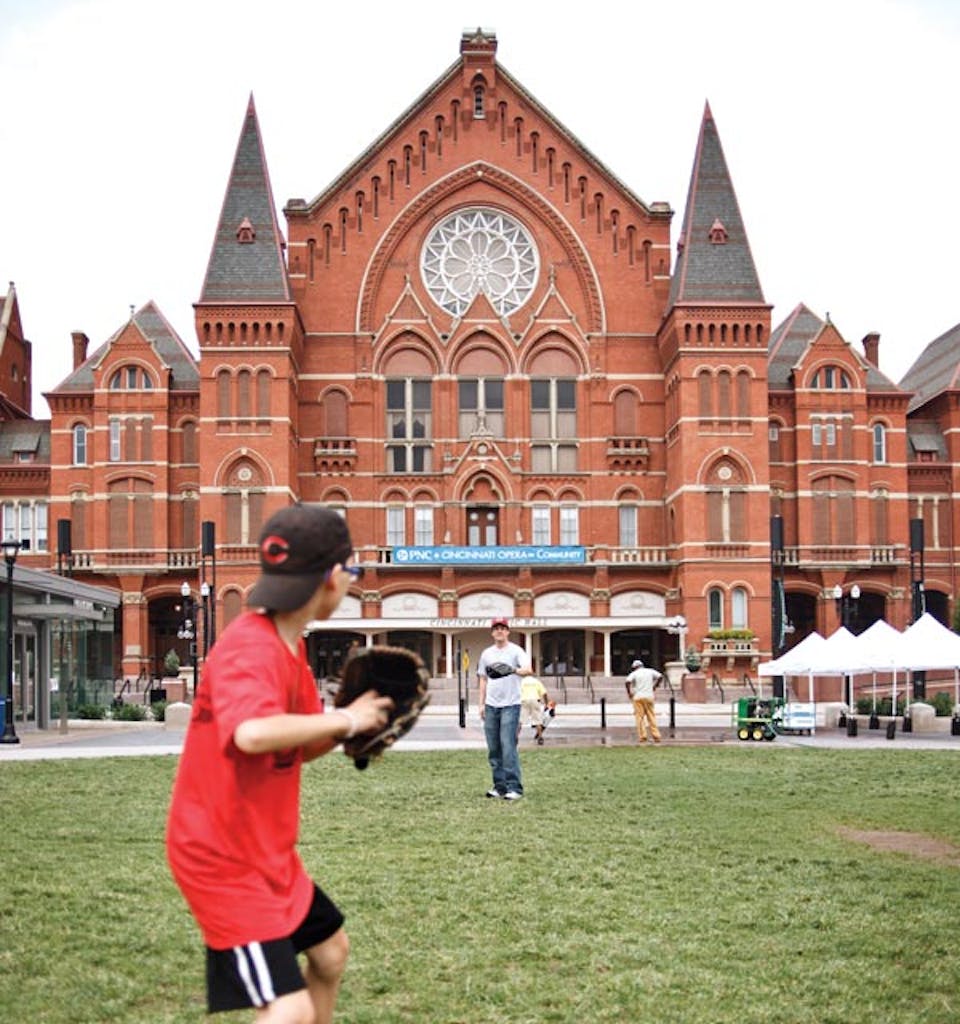 Over-the-Rhine is one of the most intact 19th-century urban historic districts in the nation. Here’s how Cincinnati saved it.

From behind the steering wheel of his 1975 red Cadillac Eldorado convertible, Mike Morgan cruises the streets of Over-the-Rhine with one arm propped casually on the door, his index finger at the ready.

He’s pointing out the sights and spinning tales of the downtown Cincinnati neighborhood’s rich history. A home to waves of German immigrants in the 1800s, Over-the-Rhine today boasts one of the largest and most intact 19th-century urban historic districts in the United States. It’s also believed to be home to the United States’ largest collection of Italianate architecture and one of its oldest brewery districts. 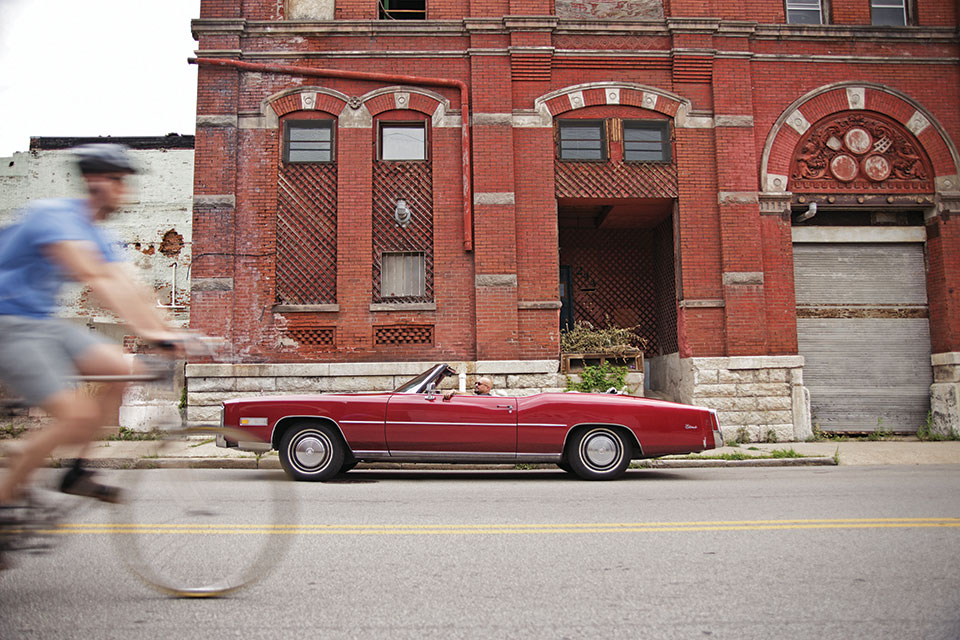 Morgan, who offers weekly history-infused tours of the neighborhood, sidles all 18 feet of his Eldorado to the curb in front of a silent brick building trimmed in ornately carved cornice work and a six-pointed brewer’s star in its archway — a sign that the building once housed a brewery that met the highest German standards of purity. He unlocks a creaky door leading to steep metal stairs that end 40 feet below street level. At the bottom, Morgan enters a cavernous room with an arched brick ceiling, bare bulbs and whitewashed walls.

Because it remains 55 degrees year-round, this cellar and others were created in the mid-1800s beneath many of Over-the-Rhine’s German breweries as a place to store barrels of beer in the days before artificial refrigeration. In recent years, dozens of underground tunnels connecting such rooms have been discovered, and it’s believed others have yet to be found.

“The Germans drank a lot, so that really shaped the character of this area,” explains Morgan, author of Over-the-Rhine: When Beer Was King and curator of the Brewing Heritage Trail. “Telling the stories of Over-the-Rhine, celebrating the German heritage and brewing history in particular, has drawn people [here] and helped make many of them fanatic about it.” 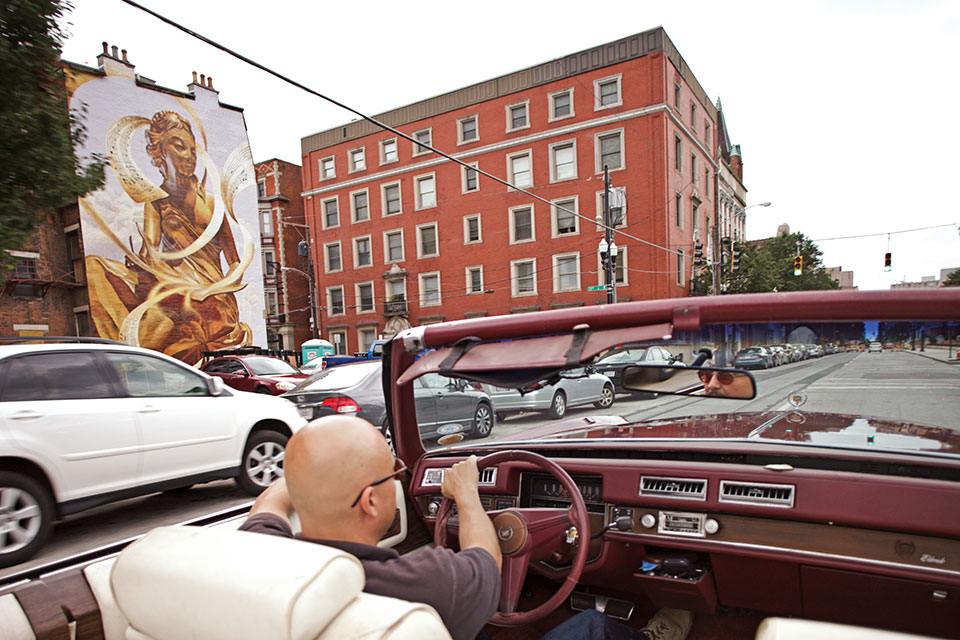 Mike Morgan offers Brewing Heritage Trail tours of Over-the-Rhine. The neighborhood was home to more than a dozen breweries in the late 1800s. (photo by Kelly Wilt)

It wasn’t long ago that the idea of visiting Over-the-Rhine — let alone exploring what lies beneath it — was a scary proposition. The neighborhood was once one of the most economically disadvantaged in the nation and plagued by rampant crime. In the early 2000s, Over-the-Rhine had a poverty rate of 58 percent, an unemployment rate around 25 percent and a median household income of less than $10,000. In 2001, it was the site of riots prompted by the killing of a 19-year-old African-American by a white police officer.

In 2006, around the time that the National Trust for Historic Preservation designated Over-the-Rhine one of the Most Endangered Historical Places in the United States, beer lovers, economic development folks and preservation activists stepped in to save an area they saw as a historic treasure and a destination for a new generation.

The turnaround has been quick and dramatic. On a typical weekend, the streets of Over-the-Rhine bustle with urban dwellers, 20-something hipsters, suburban families and empty nesters. They come to shop in the neighborhood’s boutiques, dine at its restaurants and lounge in the lush grass of the 8-acre Washington Park. The public space, a beneficiary of a $48 million renovation thanks to public and private grants and redevelopment funds, is home to fountains, a playground, a dog park and a full schedule of events.

“It went from war zone and open-air drug markets to people standing in line for two hours to get into tapas and sushi restaurants,” says Morgan. “It’s hard to walk down many of these streets and comprehend what this place was like as recently as 2005.”

Daniel Wright, a chef who hails from Chicago and was named Best New Chef in the Great Lakes by Food & Wine in 2012, chose Over-the-Rhine to open his restaurants after he and his wife relocated to her hometown. Now his two eateries, Senate and Abigail Street, are among the hottest in the city. “People come down and say, ‘Wow, I can’t believe how much everything has changed,’ ” says Wright. “A lot of really good independent chefs who have worked in other cities have realized that this is not only a great place to build a restaurant but a great place to raise a family.”

To understand Over-the-Rhine’s rise, fall and resurgence, one must follow the trail of beer. In the mid-1800s, when large numbers of German immigrants were settling in Cincinnati, the Miami and Erie Canal formed the border of this German-American community and was nicknamed “the Rhine” after the river of their homeland.

At Over-the-Rhine’s peak in the late 1800s, the neighborhood housed more than a dozen breweries inside six square miles. When Prohibition was enacted in 1919, it devastated the neighborhood’s economy. Breweries and saloons closed and vacant buildings lapsed into disrepair. It became a place dominated by cramped tenements, progressively worsening poverty and increasing crime. From a high of nearly 45,000 in 1900, Over-the-Rhine’s population dwindled to fewer than 5,000 by 2007.

Christian Moerlein Brewing Co., which was founded in 1853, was one of the businesses that went under during Prohibition. But 10 years ago, Greg Hardman bought the Moerlein name and that of other legendary Cincinnati beer brands Hudepohl, Burger and Little Kings with the aim of returning them to their former glory. 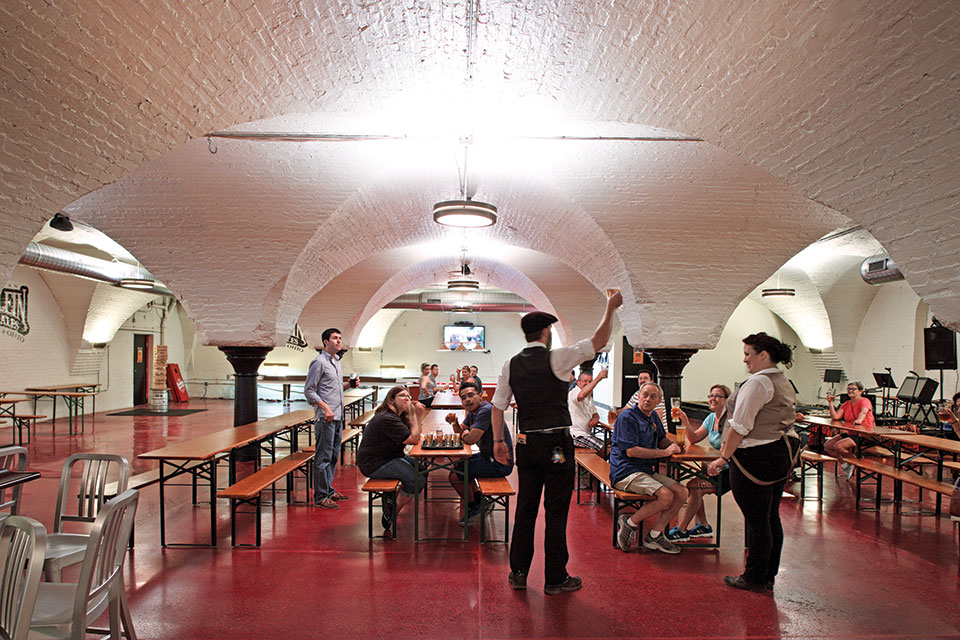 Hardman brews in Over-the-Rhine, where the Moerlein Taproom draws large crowds every weekend and hosts one of the central events of the annual Bockfest beer festival, which drew more than 30,000 people this year. The new Moerlein brands, such as the popular Moerlein OTR Ale, can be found on shelves and taps across the city.
Around the same time Hardman began reviving Moerlein, the Cincinnati Center City Development Corp. began land-banking vacant properties — 200 buildings and 170 lots — with private funds, seeing the economic development opportunities presented by the neighborhood’s brewery-inspired architecture and proximity to downtown.

By 2007, the Cincinnati Center City Development Corp. was beginning to sell condos and leasing rehabbed commercial space, and it has since guided the investment of $300 million in the neighborhood. The area’s overall revival has included 122 restorations, 22 newly built structures and more than 50 new businesses, including restaurants, retail and office space.

“The true pioneers are the small business owners and condo buyers who believed in the plan and invested their own dollars in the early years of resurgence,” says Cincinnati Center City Development Corp. vice president of marketing and communications Anastasia Mileham. “These folks hired from the neighborhood, fought for more police presence and helped revive this community.”

Over-the-Rhine’s renaissance hasn’t wiped clean the urban grit and replaced it with upscale sparkle. It’s more like a woven tapestry, where the old and new intermingle. Condo developments exist beside low-income public housing. Social service agencies can be found interspersed with stores and restaurants. Much of the neighborhood’s grand architecture is still boarded up, waiting for the restoration wave to reach it.

“It would be naive to say it’s totally safe … you have to act like you are in a downtown,” says Isaac Watras, a high school teacher who moved to Over-the-Rhine in 2004 with his then-expecting wife, Sujean Kim. They were drawn here by the architecture and affordability of the area despite its reputation at the time. He was attracted to the people who had chosen to live there and who had become active in making the neighborhood better.

“As much as I am happy about the revitalization, I am still in love with the neighborhood for all the same reasons as in 2004,” says Watras. 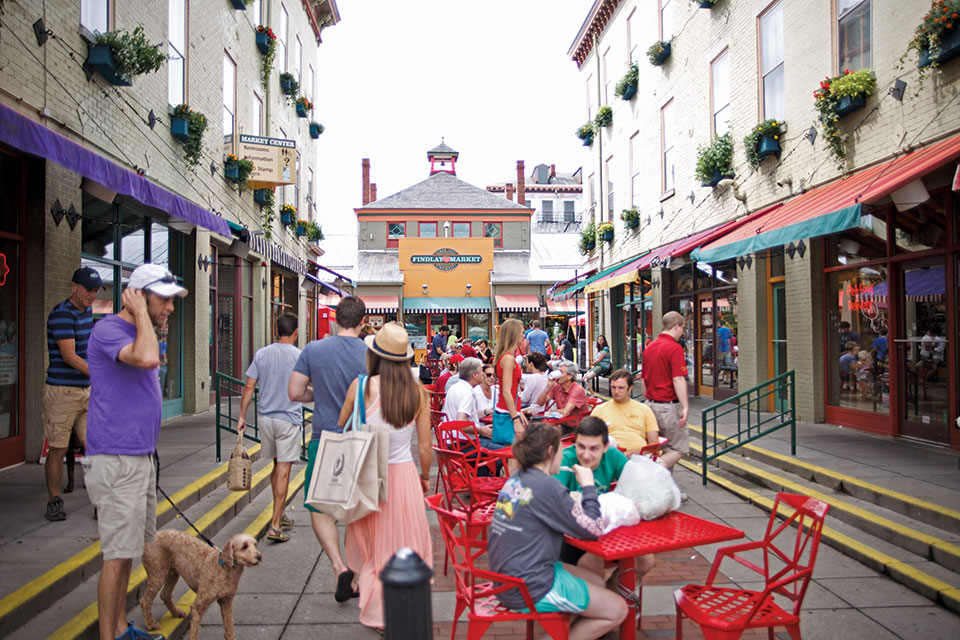 The historic Findlay Market dates back to the middle of the 19th century. (photo by Kelly Wilt)

Alongside the shiny newness of Washington Park and the area’s retail and dining corridors stand the neighborhood’s landmark institutions. Built in 1852, Over-the-Rhine’s Findlay Market is the oldest continually operating public market in Ohio, and it now bustles with foot traffic from its old regulars as well as new visitors.

The grand Music Hall, built in 1878 and the longtime home of the Cincinnati Symphony Orchestra, once loomed over a dark and crime-infested Washington Park. Patrons parked in an attached lot at the rear of the hall and entered without ever having to set foot on the street outside.

Last summer’s LumenoCity event at Washington Park was a striking symbol of how much the neighborhood has changed. The event, which pairs a precisely choreographed light show with an outdoor orchestra performance, returns to Washington Park for three nights Aug. 1 through 3.

During last year’s inaugural concert, as the Cincinnati Symphony Orchestra launched into the opening fanfare from Strauss’ “Also sprach Zarathustra” — best known as the theme from “2001: A Space Odyssey” — colorful lights spun across the Music Hall’s facade. 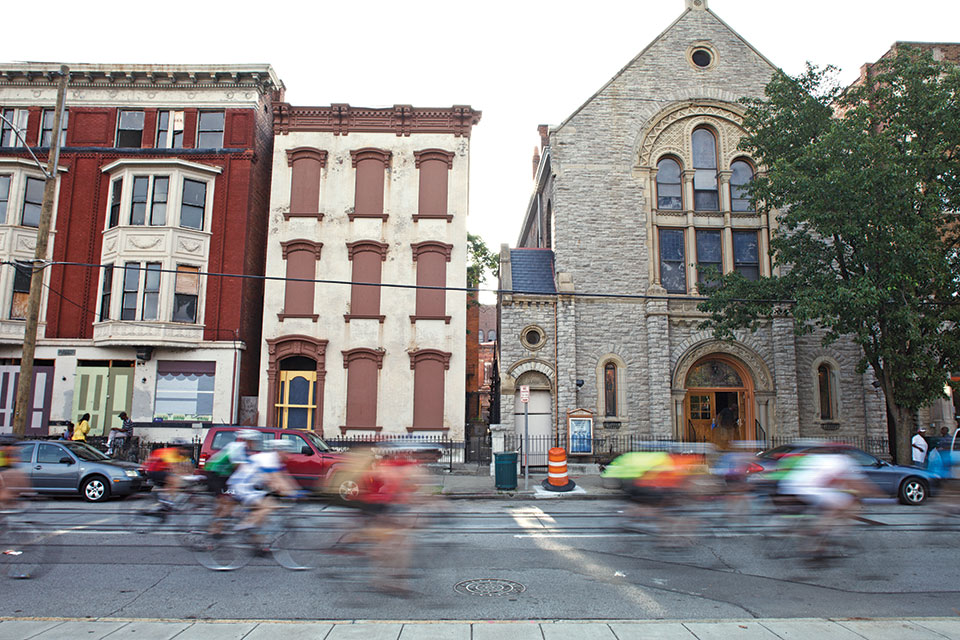 Such an event would have been unthinkable a decade ago. Watras recalls stopping in pre-renovation Washington Park during a jog shortly after moving to Over-the-Rhine, only to find a dozen rats running around its grand gazebo eating garbage. Contrast that with this spring, when he spotted actress Cate Blanchett enjoying a day at Washington Park while in town for a movie shoot.

“Moments like those show you how far we’ve come,” Watras says.

Mike Morgan says he has seen that progress, too — particularly in how concerns about safety that initially kept people away from his tours have finally given way to curiosity about what the neighborhood has to offer.

“Six or seven years ago, there were all kinds of people saying ‘Oh my god, Over-the-Rhine?’ ” Morgan recalls. “They’re the people taking up all the parking spots here now.”