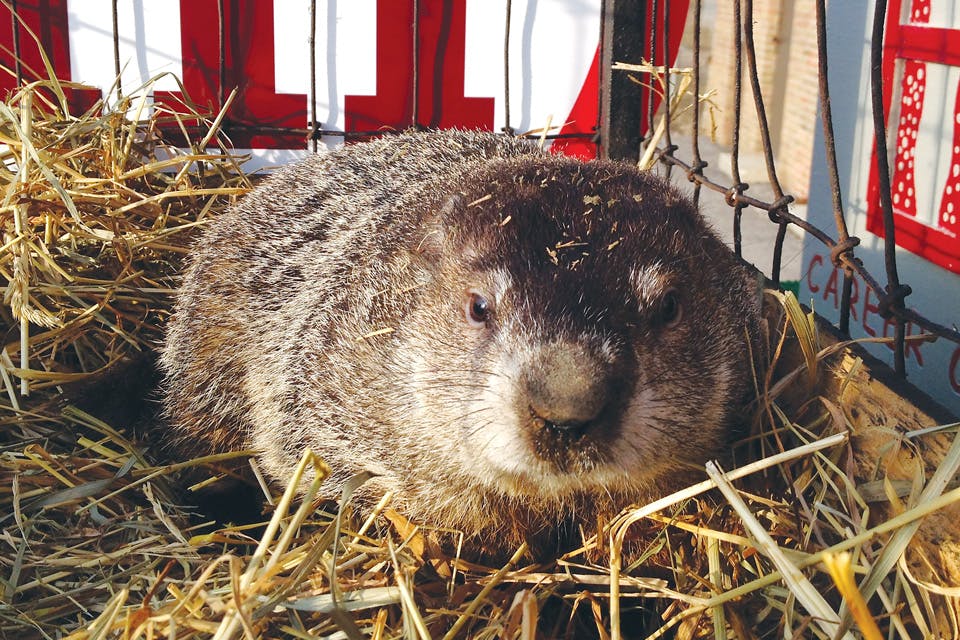 The Legend of Buckeye Chuck

Punxsutawney who? When it comes to weather-predicting groundhogs, the city of Marion turns to Ohio’s own resident expert.

It all started in the 1970s, with Marion radio host Charlie Evers gazing out the window and seeing a groundhog staring back at him. Because Feb. 2 was just a few days away, Evers mentioned the sighting to listeners and an Ohio legend was born.

“As a joke on the air, Charlie says, ‘What are we going to name our groundhog for Groundhog Day?’ ” explains Scott Shawver, Mansfield and Marion senior vice president for programming at iHeartMedia. “We had a contest.”

Buckeye Chuck was the winning suggestion, and the weather-forecasting groundhog has become a seasonal staple for Marion’s WMRN. In 1979, the Ohio General Assembly even named Chuck the state’s official weather-predicting groundhog. Then, in 1990, the radio station’s hosts decided to honor him with a more vivacious celebration.

“It was [originally] just something we did in the studio,” says Shawver. “We thought it’d be fun if we actually go outside so people could see Buckeye Chuck.”

The Tradition: Much like Pennsylvania’s Punxsutawney Phil, who has been making predictions for well over a century, Buckeye Chuck is inspired by the ancient Candlemas Day. For early European Christians this was a midway point between winter solstice and spring equinox. Just like Phil, tradition holds that if Chuck sees his shadow, we’re due for another six weeks of winter. If he does not, an early spring is on its way.

The Celebration: Buckeye Chuck visits the WMRN radio station every Feb. 2 for a celebration that kicks off directly after the morning news broadcast. Once the sun emerges, the station’s hosts announce Chuck’s forecast. Visitors from throughout Ohio as well as neighboring Michigan and Pennsylvania have been known to show up for the event to dine on Spam sandwiches (ground hog, get it?), drink hot chocolate and wait for word. “We usually have contests, like who came the farthest to see Chuck,” says Shawver. “We actually had a guy from Hawaii one year.”

The Groundhog: The current incarnation of Buckeye Chuck resides at his handler’s home in the Marion County village of Green Camp during the offseason. Local lore holds that Buckeye Chuck is the same creature that Evers spotted in the woods all those years ago, but science tells us the average captive groundhog has a lifespan of six to eight years. Much like Santa Claus, Shawver points out that part of the fun is believing. “[Buckeye Chuck] is magical,” he says. “He lives forever.”