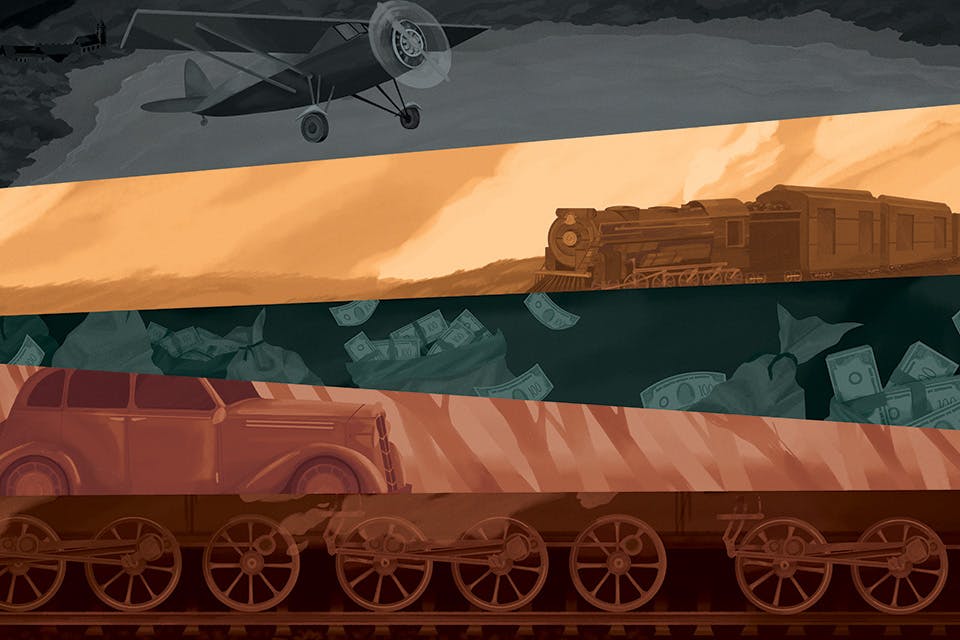 In November 1935, Alvin “Creepy” Karpis and his crew robbed a mail car in Garrettsville, Ohio, scoring a bunch of cash and making a daring escape by both car and airplane.

The 1930s were the age of the celebrity bank robber. Newspaper front pages were splashed with enormous headlines detailing the exploits of bandits like Bonnie and Clyde, John Dillinger, Pretty Boy Floyd and Baby Face Nelson.

No doubt like many people who read of those daring robberies, Earl Davis wondered what he’d do if he found himself at the business end of a gun. On Nov. 7, 1935, he found out.

Davis went to the Garrettsville, Ohio, train station that afternoon to pick up copies of the Press, Cleveland’s afternoon paper, for the newsstand at his dry cleaning shop. Also on the passenger train was the payroll for Republic Steel, delivered from the Federal Reserve Bank in Cleveland.

Davis picked up his bundles of 60 newspapers, paying little attention to the men who’d taken positions on the train station platform. Davis made conversation with the men working in the mail car — and felt something pressed up against his back.

“I turned around and saw a fellow there, and at first glance, I thought he was a fellow I knew, but he wasn’t,” Davis recalled in the next day’s Warren Tribune-Chronicle. “And he had a machine gun jammed right against me.

Davis said he didn’t know the guy, but he’d likely seen his face before. It was Alvin Karpis, who had been identified as Public Enemy Number One and doggedly pursued by the nascent Federal Bureau of Investigation, just finding its footing as the nation’s law enforcement agency under director J. Edgar Hoover.

Karpis was notorious for a string of robberies and kidnappings committed with the Barker gang. But with most gang members dead or in prison, he was on his own, and found a welcome home in northeast Ohio. He had already robbed a mail truck in Warren — for which two other men had been arrested — when he fixated on a brazen plan, hearkening back to the days of the James brothers and the Dalton gang. “Who the hell robs a train in this day and age,” one of his accomplices asked during the planning stage.

“I was aching for an exciting heist,” Karpis recalled years later. It turned out to be his last big score.

Raymond Alvin Karpovicz was born on Aug. 10, 1907, in Montreal, Quebec. When he was 8, his parents, both Lithuanian immigrants, moved the family to Topeka, Kansas. At 16, he was arrested for stealing tires and sentenced to a 10-year term at the state reformatory. After three years, he escaped and remained at large for a year before he was recaptured. He returned to the reformatory, but when he was later found to have knives in his possession, he was sent to the state penitentiary in Lansing, Kansas.

There, he became acquainted with Fred Barker, who with his three brothers — Herman, Lloyd and Arthur, nicknamed “Doc” — were infamous criminals known throughout the Great Plains. (Their mother, Kate, became known as Ma Barker, but pop-culture depictions of her as “Bloody Mama” may be more hyperbole than reality.)

Karpis, intelligent but strange enough to earn the nickname “Creepy” from his accomplices, was a meticulous planner, who approached robbery like other people approach careers. (He said never to rob a bank when you needed money; rob it when you have enough money to escape if things go sideways.) On his watch, what became known as the Barker-Karpis gang committed a variety of robberies and two high-profile kidnappings — first of Hamm’s Brewery president William Hamm Jr. in Minnesota in 1933, and then banker Edward Bremer the following year. Both men were released when ransom was paid — $100,000 for Hamm and twice that for Bremer — and the gang went its separate ways.

Karpis ended up in Cleveland, which he had found welcoming on many occasions. When John Dillinger was killed by FBI agents outside of a Chicago movie theater in 1934, Karpis had been watching the same movie — “Manhattan Melodrama,” starring Clark Gable and William Powell — in a Cleveland movie theater. He was also a regular visitor to the Harvard Club, an illegal gambling casino just outside the city limits in Newburgh Heights, and occasionally worked security there. He kept a bungalow in the city and had even buried some of the proceeds from the Bremer kidnapping underneath the garage floor.

Doc Barker was captured in Chicago in January 1935, and Ma and Fred Barker died in a shootout with FBI agents in Florida a week later. Karpis had been in Florida as well, but a call from friends in Cleveland alerted him to the FBI closing in. Karpis’ luck held when, a week after Ma and Fred Barker were killed, he had to shoot it out with local law enforcement, escaping from a hotel in Atlantic City. Karpis and Harry Campbell kidnapped a Pennsylvania doctor and made safe passage into Ohio, leaving their hostage bound and gagged in the Guilford Township Hall — with an extra $50 in his pocket for his troubles. 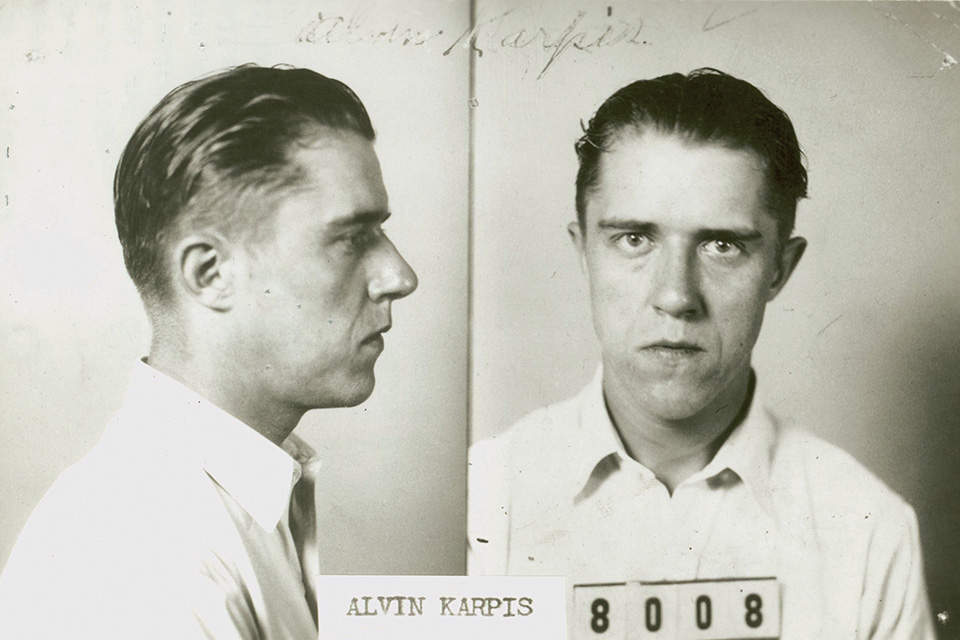 Alvin Karpis, also known as Public Enemy Number One, was a member of the Barker-Karpis gang and was responsible for bank robberies, kidnapping, burglary and auto theft. He was arrested in New Orleans on May 1, 1936 by director J. Edgar Hoover and FBI agents. (photo courtesy of the FBI)

Karpis assembled a gang of his own and in April 1935 robbed a mail truck in Warren, Ohio, which was delivering payroll from the same train they would rob seven months later. When Karpis’ partners panicked on the station platform, the truck drove off. Karpis cut off the truck, and two accomplices got in and drove it to a garage, where the driver was unburdened of $72,000 of money from the Federal Reserve Bank. Within hours, two men unconnected to the Karpis gang were arrested for the robbery.

“I was beginning to think that the jails and prisons of North America were filling up with guys serving time for the jobs that I and the other Karpis-Barker members had actually pulled,” Karpis recalled in his autobiography.

The FBI continued to pursue Karpis, but he had already set his sights on the train robbery. He knew the Erie passenger train, which ran daily from Cleveland to Pittsburgh, regularly carried payrolls from the Cleveland Federal Reserve Bank. He had planned it down to the second, even his escape. “I couldn’t lay low in Ohio after the score,” he said. “I’d have to move away fast.”

The morning of the robbery, the six-member gang loaded into a new Plymouth (Karpis wanted a Ford V-8 — Clyde Barrow’s favorite getaway vehicle — but couldn’t find one for sale) and headed to Garrettsville. The car was loaded with guns, dynamite and a medical kit — just in case. One accomplice, Ben Grayson — notable that day for his comical fake mustache — jumped into the cab of the locomotive to keep the engineer and fireman at bay. Another, Fred Hunter, monitored the parking lot to make sure no one entered or left. After Karpis yelled “Stick ’em up” to Davis, the mail car workers who were standing in the doorway talking to him, retreated into the mail car.

Karpis threw an unlit stick of dynamite into the mail car, and promised the next one would be lit, making the workers more cooperative. The robbery was over in a matter of minutes, with no one hurt. The robbery netted $34,000 in cash and $12,450 in bond securities — around $715,000 in today’s money.

“I’d been expecting six times that amount,” Karpis said, expecting another payroll for Youngstown Sheet & Tube to be on the train in addition to the Republic payroll. “I was sore, but I told myself that there’d be plenty of other scores.”

The gang lit out toward Ravenna, taking back roads on their way to Port Clinton. Karpis had mapped out the route well in advance, and if the robbery was a throwback to the Old West, his escape was completely modern. Karpis and Hunter had chartered a Stinson airplane, and the morning after the robbery, were flown to Hot Springs, Arkansas — another town known for its hospitality to criminals.

Karpis was already wanted by the FBI, but by robbing the mail car of the train, he’d incurred the interest of the U.S. postal inspectors, who identified him almost immediately as a suspect. J. Edgar Hoover was also facing political pressure to make a big arrest personally, after being grilled during a Senate appropriations hearing.

So, when the FBI located Karpis in New Orleans the following year, Hoover personally flew there to apprehend him. But the fugitive said that Hoover waited until he was safely in custody to show himself.

“I made Hoover’s reputation as a fearless lawman,” Karpis said in his memoirs. “It’s a reputation he doesn’t deserve.”

Karpis was convicted of kidnapping and sentenced to life in prison (he was never tried for the train robbery). He was shipped to Alcatraz in San Francisco Bay, where he confessed to his role in the mail truck robbery, leading President Franklin Roosevelt to pardon the two men already in prison for the crime.

Karpis stayed at Alcatraz until shortly before the prison’s closing, the longest-tenured inmate there. In 1962, Karpis went to McNeil Island Penitentiary in Washington, where he met a young man named Charles Manson, who would go on to become the leader of a California criminal family responsible for eight murders over two nights in 1969, but at the time was in federal prison for passing bad checks. Karpis taught Manson how to play guitar.

In 1969, Karpis was paroled and deported to his native Canada, where he wrote his memoirs. Public Enemy Number One made him famous, and he relocated to Spain, where he died in 1979, shortly before publication of his second book, about his quarter-century at Alcatraz. He’d outlived his old nemesis Hoover by seven years.

“There are no apologies, no regrets, no sorrows and no animosity,” Karpis said in concluding his first book. “What happened, happened.”