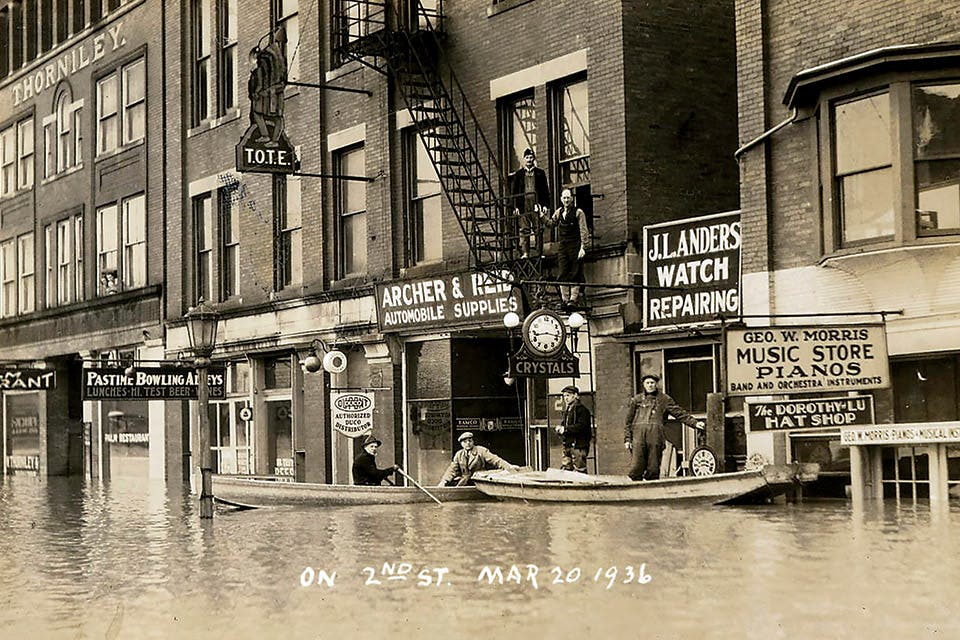 That spring, Marietta was just one of many river towns overtaken by rising waters that covered portions of a dozen states.

The flood waters had crested to 48 feet by the time this photograph of downtown Marietta’s Second Street was taken on March 20, 1936. The community was just one of many river towns that sustained severe flooding when the Ohio River and its tributaries overflowed their banks due to heavy spring rainfall. With 12 states affected by the flooding, communities were left reeling from an estimated $250 million in damages and 200 deaths. Flood waters ravaged the low-lying areas of Marietta, and United Press news agency reporter William Lewis provided a firsthand account of the devastation.

“While flood waters ravaged a desolate business section here today, I rowed through the swift current the entire length of the flooded area,” Lewis reported in a story that appeared in the The Piqua Daily Call on March 20, 1936. “I saw the aged and sick being removed to safety as the water, slowly but inexorably, surrounded their homes and mounted in many cases to second floors.”

Lewis described debris crashing through storefronts and dogs “howling piteously from second floor windows.” Those who ventured out into the tides of the floodwater risked being carried away into the river’s current.

“I saw several boats overturn as they were swept against telephone poles and buildings,” Lewis wrote.

In the following days, the flood waters began to recede, and residents of Marietta and many other towns along the Ohio River were tasked with cleanup.