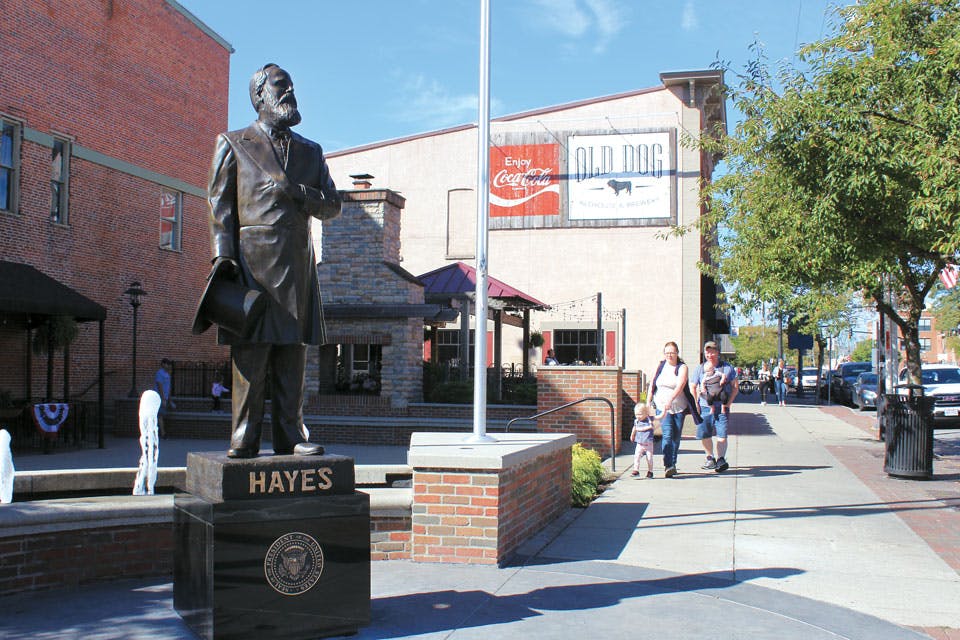 Our 19th president was born in this central-Ohio community, but until 2019 you might not have noticed. Today, a downtown statue commemorates his life and service.

Gene Buckingham lives in Union City, Indiana, now. But his ties to Delaware, Ohio, the town where he grew up, remain strong. For years, he ruminated over the fact that the central-Ohio city had no monument dedicated to our 19th president, Rutherford B. Hayes, who was born there in 1822.

“Every so often, it would pop into my mind that something needed to be done to celebrate the fact that Delaware is very fortunate to have this tie and it needed to be recognized,” Buckingham says.

That finally happened Oct. 4, 2019, when the city unveiled a 7-foot, 700-pound bronze statue of the former commander in chief to mark the 197th anniversary of Hayes’ birth. The idea to commission the figure was sparked in 2016, when Buckingham approached civic leaders.

“I believed in Gene’s idea from the start,” says Bill Rietz, a retired local history teacher, who chaired the Rutherford B. Hayes Heritage Fund Committee that raised more than $160,000 for the project. “I was always committed to telling my students about him.

“In addition to serving in our government, he volunteered for service in the Civil War despite having three children at home. He also supported the 15th Amendment granting freed African American men the right to vote and was an advocate for prison reform.”

In addition to donations by corporations, Delaware residents also contributed to the fundraising effort. Local school children initiated a Pennies for the President drive that raised more than $1,100 for the project.

For Zanesville sculptor Alan Cottrill, who created and cast the work, it proved to be an irresistible endeavor.

“I grew up in Ohio and identify with famous natives,” says Cottrill, whose work also includes the sculpture of Thomas Edison in the U.S. Capitol. “You don’t rise from common stock, become a leading general and later president of the United States without a degree of audacity and swagger, and I wanted to project that strength. I put sadness in his eyes because of all that he had experienced during the Civil War. But I also wanted to project him as a visionary, gazing into the future as all presidents should do.”

The statue is at the southwest corner of William and Sandusky streets in Delaware.