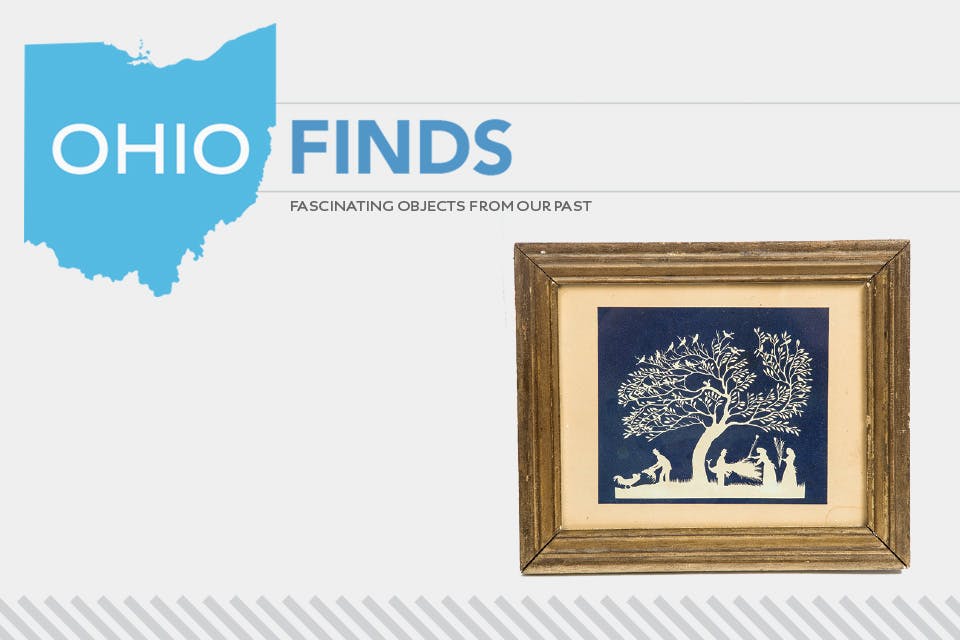 Seymour Lindsey Paper Cutting Framed piece depicting an outdoor scene  Accounts of Seymour Lindsey’s life often talk about his sense of humor, but typically don't mention his patience. But Lindsey was certainly a very patient man, as his artwork will testify.

Born in Richland County in 1848, he held a number of jobs as an adult, all having a folkish flair. He was a house painter whose efforts included agricultural murals on the sides of barns, and he also did grain paintings on the interior of homes, typically hiding animals or birds somewhere within his work. But his most recognizable talent was paper cutting.

Scherenschnitte — the art of cutting paper into decorative images — was popular in the late 19th and early 20th centuries. Using single sheets of paper, Lindsey created detailed images that included trees, birds, animals, people and pets. Such intricacy and creativity were made even more impressive by the small scale of his hand-fashioned silhouettes. In one, a squirrel runs up a pole. In another, a bird feeds two of its young in a nest high atop a tree.

His scenes were typically light colored and can be found mounted on dark blue or black paper, sometimes within frames the artist made himself. Although Seymour lived in the Lexington area his entire life, he traveled to the Philadelphia Centennial Exposition in 1876 and the Chicago World’s Fair in 1893 to sell his works.  When Lindsey died in 1927, his obituary in The Mansfield News noted he was known throughout the county as an interior decorator, but there was no specific mention of his paper cutting, possibly due to the art form having fallen out of favor by that time. This framed paper cutting by Lindsey depicts an outdoor scene that includes a woman plucking peacock feathers.

Richard Jeffers is the of Garth’s & Auctioneers & Appraisers in Columbus. garths.com