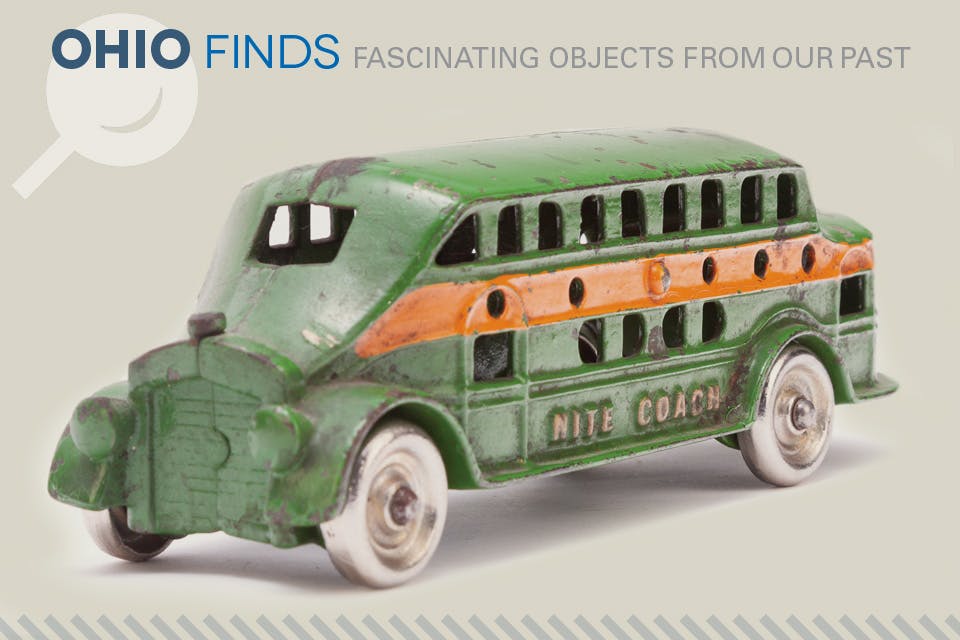 This piece was produced during the 1920s, as the Kenton-based company began making toys alongside its functional cast iron products

In the 19th century, cast iron became a type of wonder material. The raw ingredients were cheap, and molds could be used to readily produce objects in nearly any shape imaginable. It was used to create items as simple as hinges, as complex as bridges and as conventional as skillets. During the late 19th century and into the mid-20th century, cast-iron toys became commonplace as well.

In Ohio, Kenton Hardware Co. grew to be a major manufacturer of cast-iron items. Founded by F.M. Perkins as the Kenton Lock Manufacturing Co. in May 1890, the firm initially focused on refrigerator locks patented by Perkins and made at the J. Forbins Scroll Mill in Kenton. In 1894 two major shifts occurred: the business changed its name and toys were added to the production line, with early output including stoves, banks and horse-drawn fire equipment.

A 1903 fire destroyed the company's facilities, but Kenton Hardware Co. returned in 1912 when sales agent L.S. Bixler took over the firm. He directed it until his death in 1951. During Bixler's tenure, Kenton once again became known for its production of cast-iron toys and banks. Through the 1920s, horse-drawn toys were popular, while automotive toys, first made by Kenton in 1923, became a mainstay for the company from 1933 to 1940.

Over the years, competing manufacturers began using sheet metal, lithographed tin and rubber to make toys that were lighter and more colorful, significantly decreasing demand for cast-iron playthings. Kenton Hardware Co. did not respond to those changes and went out of business in 1952.