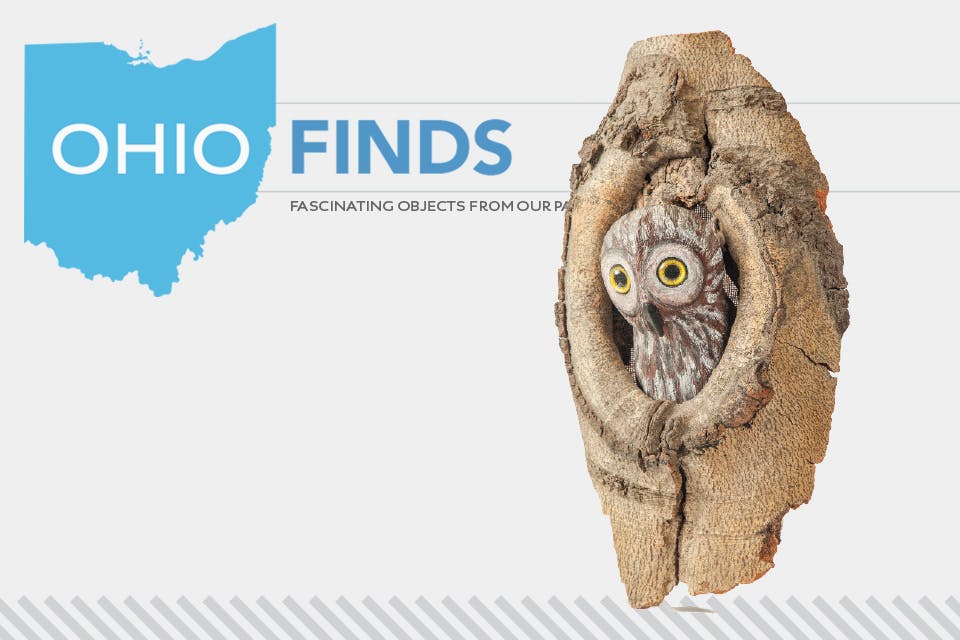 Birds were a favorite subject for the artist, with pieces ranging from traditional folk-art carvings to more outsider works like this one.

John “Okey” Canfield was a self-taught artist who excelled in woodcarving, a hobby the West Virginia native took up after moving to Ohio in 1931 and settling in Ravenna. According to a brief biography published by Betty-Carol Sellen in Self-Taught Outsider and Folk Art: A Guide to American Artists Locations and Resources, Canfield had dabbled in other pursuits as well: He was a coal miner, factory worker, outdoorsman, gunsmith, stringed instrument-maker, ballad writer and singer. But it was the outdoorsman part that rose to the surface when Canfield took out a knife and began whittling.

Birds were a favorite subject and ranged from robins to penguins. At times, Canfield’s work resembled traditional folk-art carvings of the 19th century, such as bird trees: fanciful creations of multiple, brightly painted birds perched on the branches of a barren tree. Those traditional carvings were offset by the artist’s contemporary-styled figures — again typically birds — that were more outsider art than folk art. Some were a bit less refined in their appearance and the painted designs were more of a flight of fancy than realistic depictions. Yet all of Canfield’s carvings turn the heads of dedicated collectors. Some buy because of the folkish nature of the pieces. Others simply have a liking for birds. Then, there are those who merely desire objects with an Ohio connection.

Despite a proliferation of Canfield's work (more than 1,000 carvings, according to Sellen), relatively little information about his life is known. It's believed his interest in hunting inspired many of his creations (parrots and penguins aside) but few details have been published about the man himself. One of Canfield’s more unusual carvings is this 22-inch piece depicting an owl, with hand-painted details and large glass eyes, placed in the hollow of a tree.

Richard “Jeff” Jeffers is the owner of Garth's Auctioneers and Appraisers in Columbus. garths.com