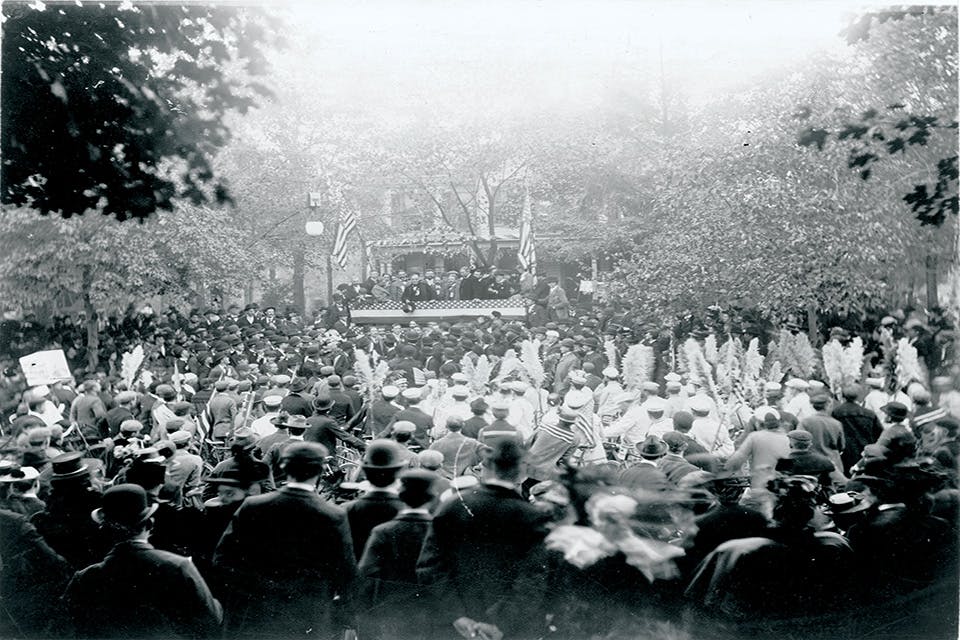 Ohio and the Front Porch Campaign

Before whistle-stop tours and crisscrossing the country, presidential candidates spoke to crowds at their own homes. Here’s how three Ohioans used the approach to win our nation’s highest office.

June 2020
BY Vince Guerrieri | Photo courtesy of Library of Congress

June 2020
BY Vince Guerrieri | Photo courtesy of Library of Congress

No matter what happened during the 1880 Republican National Convention, James A. Garfield was going to Washington, D.C., the following year. The Civil War veteran and congressman representing Ohio’s 19th district had been selected by the state legislature in January of 1880 to be a U.S. senator when the 47th U.S. Congress convened the next year.

But after a deadlock at that summer’s Republican National Convention in Chicago, Garfield emerged on the 36th ballot as a compromise candidate for president.

So, he returned to his home in Mentor, and President Rutherford B. Hayes, whom Garfield knew from his time in Washington, advised him to stay there and let others speak on his behalf. Hayes thought campaigning for president was unstatesmanlike, if not unseemly. But it was a marked change for Garfield, who had run for office every two years since 1862.

“He actually loved campaigning,” says Joan Kapsch, a park guide at Garfield’s Mentor home, now known as the James A. Garfield National Historic Site. “He’d campaigned for himself and other politicians all his adult life.” 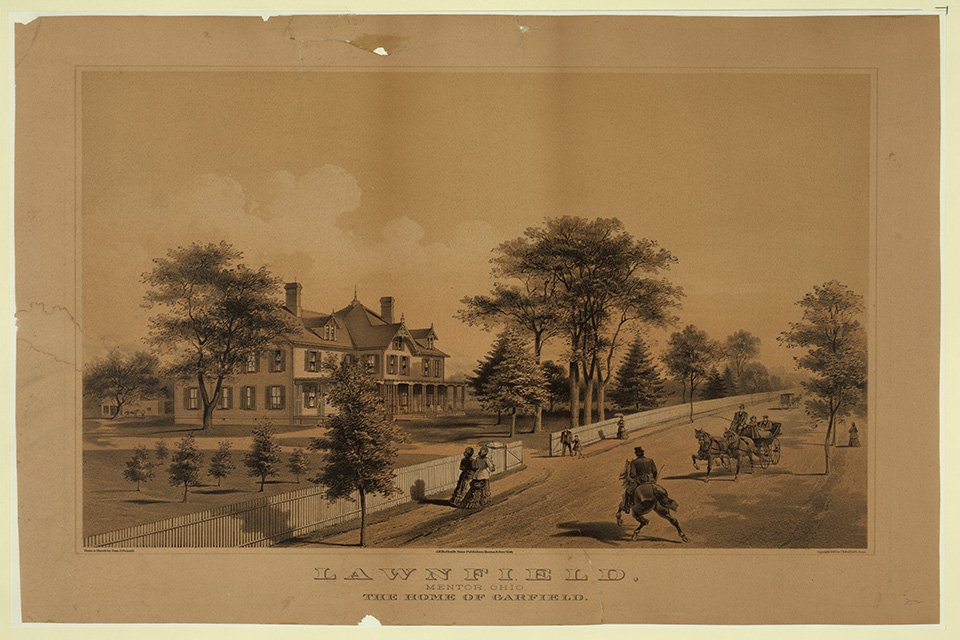 This circa 1881 lithograph depicts James A. Garfield’s Mentor home. Reporters who covered his campaign gave it the nickname Lawnfield. (photo courtesy of Library of Congress)

Out of curiosity to meet the new nominee, people started coming to Garfield’s home — 200 in just the first week after his return from the convention. He would step out to greet them, offer a few remarks and, along the way, the first front porch campaign was born. Garfield was soon regularly speaking to the crowds that gathered, sometimes daily.

“He spoke to the issues of the day,” Kapsch says. “One time, a group of Germans came from Cleveland and he practiced a few sentences in German to speak to them.”

Mentor’s train station was about a mile and a half east of Lawnfield, but Garfield’s property had railroad tracks running through it. Originally, well-wishers would disembark at the station and parade to Garfield’s home, but later, the Lake Shore & Michigan Southern Railway built a platform on Garfield’s property. The train would stop, people would exit, listen to Garfield speak, offer their well wishes, and get back on the train. It’s estimated that 17,000 people came to see Garfield over the course of his front porch campaign, which ran from June through October. 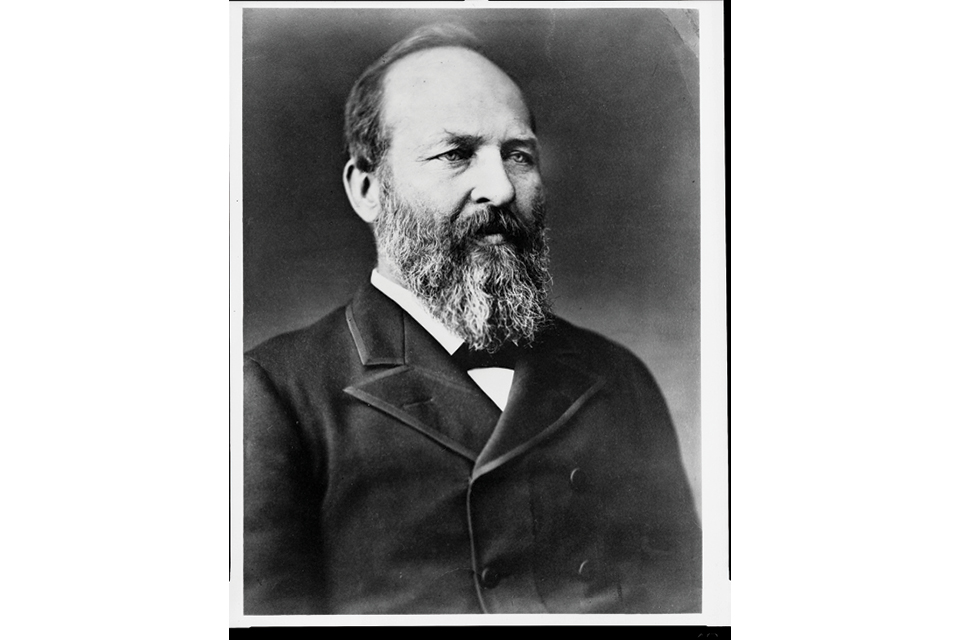 James A. Garfield was credited with inventing the front porch campaign long after his death. (photo courtesy of the Brady-Handy Collection, Library of Congress)

An outbuilding near the house, which Garfield used as his library, was converted into an office where reporters and campaign workers would congregate, and a telegraph was installed to transmit stories along with election results that Nov. 2, when Garfield defeated Democratic candidate Winfield Scott Hancock. On March 4, 1881, Garfield took office not as a U.S. senator, but as the 20th president of the United States. He also had the second-shortest term as president in American history, after being shot at a Washington train station on July 2 and dying from those injuries on Sept. 19. Garfield was credited with inventing the front porch campaign long after his death, even if his innovation was just serendipity.

“It wasn’t really planned,” Kapsch says. “It was just a reflection of his character. He loved speaking to the public and wanted to make people welcome.”

Where Garfield’s front porch campaign was an outgrowth of his personality, William McKinley’s 16 years later at his home in Canton was more of a calculated question of need: It was the chance for him to contrast himself with his Democratic opponent.

“William Jennings Bryan was blanketing the country with his speeches, and McKinley knew he couldn’t compete with that,” explains Kim Kenney, executive director of the McKinley Presidential Library & Museum in Canton. “He knew he’d do better if people came to him.”

A front porch campaign enabled McKinley — by all accounts a devoted husband — to stay close to his wife Ida. The McKinleys had two daughters who both died as children, and Ida (in poor health to begin with) was effectively an invalid afterward.

McKinley’s campaign manager Mark Hanna engineered excursions to Canton, where people would parade up Market Avenue from the train station to the future president’s home.

“Mark Hanna ran it all,” Kenney says. “It wasn’t the first front porch campaign, but it was the biggest and the most successful.” 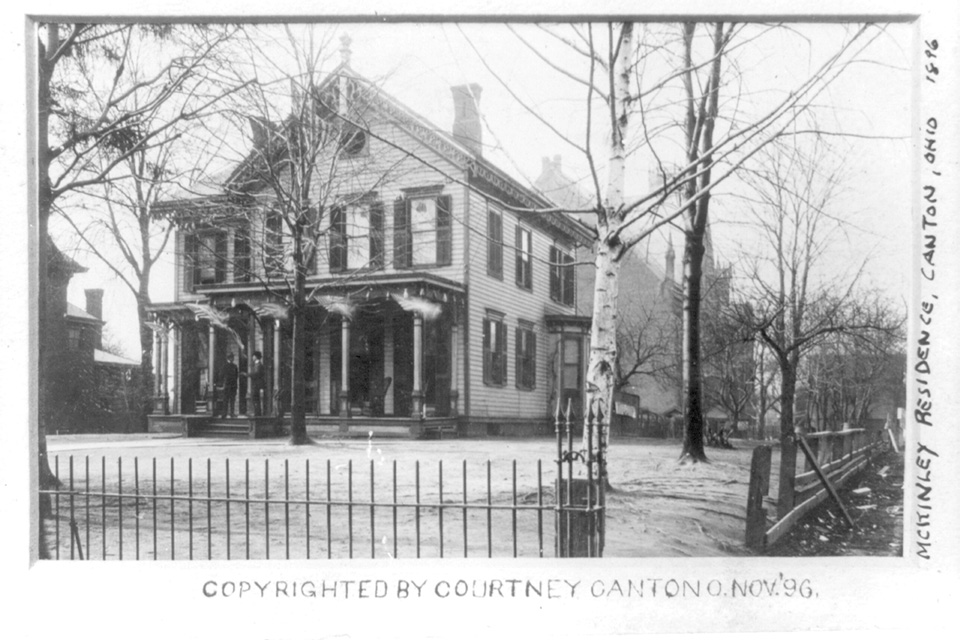 William McKinley’s Canton home has long since been demolished, but pieces of it have lived on throughout the community. (photo courtesy of Library of Congress)

From July until the end of October, McKinley gave more than 300 speeches to a variety of groups, and even held a women’s day gathering a full 24 years before the 19th Amendment was ratified, giving women the right to vote.

“McKinley’s theory was that women couldn’t vote, but could influence their husbands,” Kenney says.

Around 750,000 people in all came to Canton to hear the candidate, who was elected our 25th president in 1896. Four years later, he was re-elected. This time, as the incumbent, he largely stayed in Washington, leaving the campaigning to his new running mate, Theodore Roosevelt. 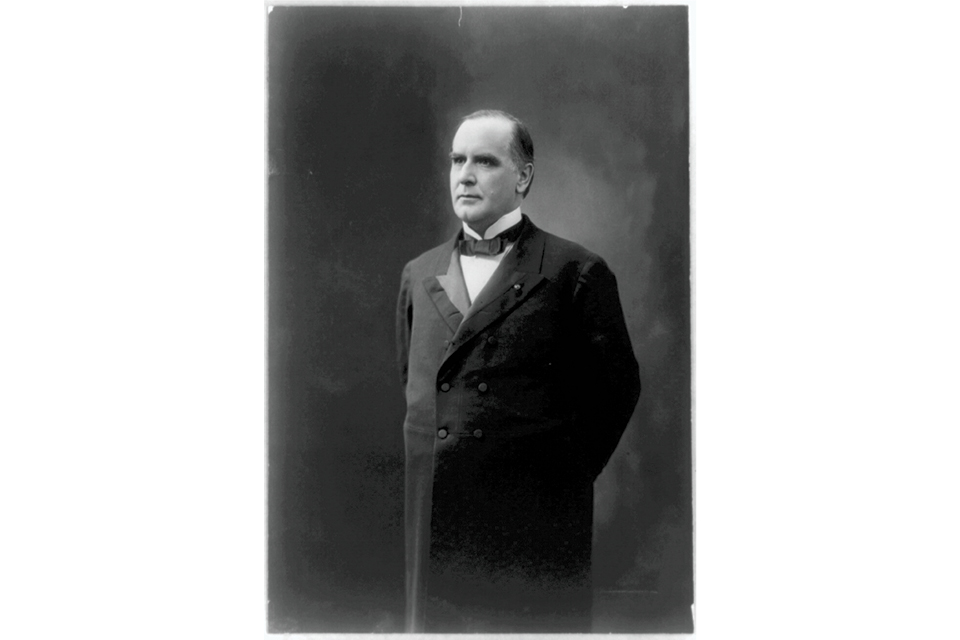 From July through the end of October 1896, William McKinley gave more than 300 speeches to a variety of groups at his Canton home. (photo courtesy of Library of Congress)

McKinley was assassinated a little more than six months into his second term as president. In 1907, an impressive memorial was dedicated in Canton, and the former president, Ida (who’d died earlier that year) and their two daughters were interred there.

The home where McKinley had campaigned became part of a hospital in the city and later home to the Stark County library, but it was ultimately torn down. (the library’s main branch is still located on the site today.) Originally, plans were made to renovate the McKinley
home, but the stock market crash of 1929 and the Great Depression made funds short.

After the house was torn down, pieces of wood from it were used throughout the city’s park system or made into gavels, at least one of which went to another Republican presidential candidate, Wendell Willkie, in 1940.

“It’s possible there are pieces of the house all over town,” Kenney says. “We just don’t know where.”

Even nearly 20 years after his death, William McKinley was remembered fondly by many Ohioans, including U.S. Sen. Warren G. Harding, who had campaigned for McKinley in 1896. Similar to Garfield 40 years earlier, Harding emerged as the nominee from a crowded field at the 1920 Republican convention.

Harding wanted to stay at his Marion home in part for his wife, Florence, who had chronic kidney disease. Given the mood of the country following World War I, he also wanted to draw a contrast to his opponent, Ohio Gov. James M. Cox.

“Jim Cox was racing around by train and had the audacity to take off his jacket and roll up his sleeves while campaigning,” says Sherry Hall, director of the Warren G. Harding Presidential Sites in Marion. “He came across as frantic.” 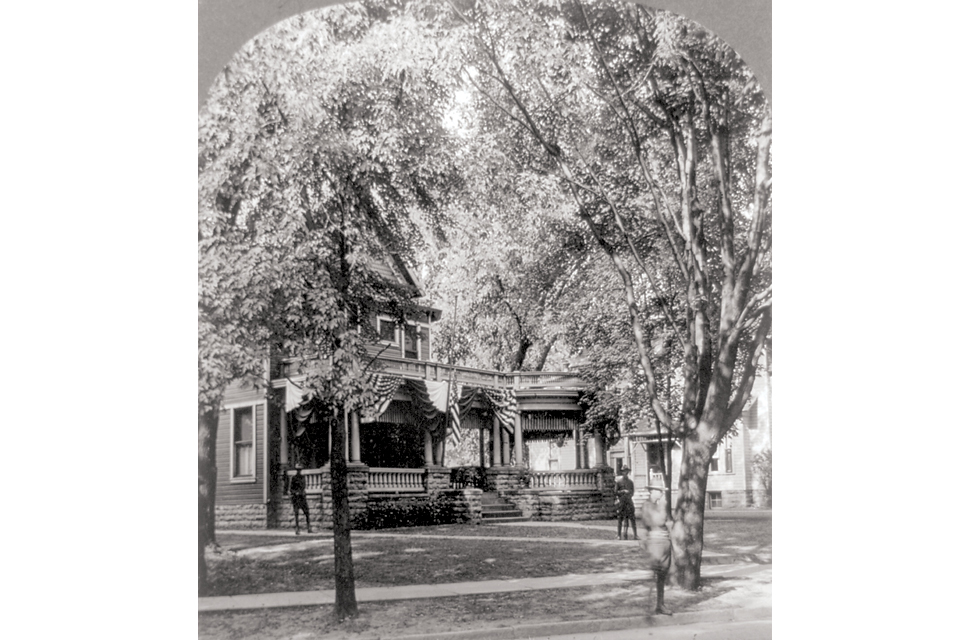 Warren G. Harding campaigned on the expansive porch of his Marion home, which was added to the house in 1903 — 12 years after he and his wife built it. (photo courtesy of Library of Congress)

“Harding had a very deep, commanding voice, and he sounded cool, calm and collected on his front porch. He looked more reassuring, particularly after a precarious wartime.”

Harding made the McKinley comparison even more obvious, taking the flagpole that once stood in front of McKinley’s home and putting it in front of his.

Harding received more than 600,000 visitors during the campaign, which ran from the end of July through October. He stood on the expansive front porch that had been added to the home in 1903 — 12 years after the Hardings built it — making speeches to thousands of people at a time without the aid of an amplification system. Harding learned one other important lesson from McKinley’s front porch campaign: He laid down gravel on his front lawn to avoid the grass being trampled like McKinley’s was. 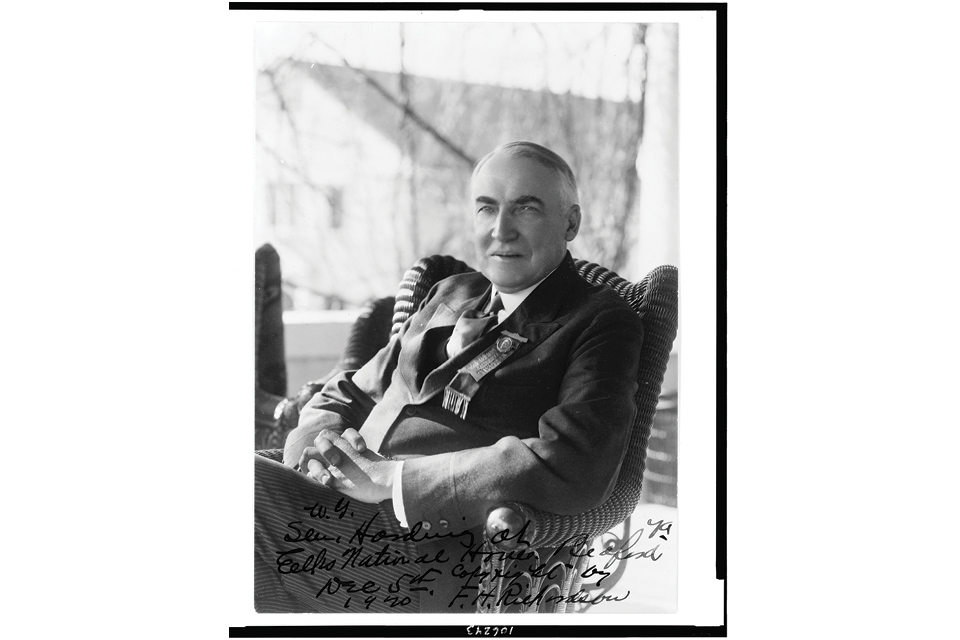 Warren G. Harding ran him campaign from home in order to take care of his wife, Florence, and to show his awareness of the country’s climate following World War I. (photo courtesy Library of Congress)


“The front porch campaign is about to come to an end,” prophesied Cox, who had crisscrossed the country, visiting 36 of the 48 states of the time. Harding traveled some states too, visiting 13 states by train.

Even though Cox lost, he was proven correct. Automobile travel was starting to supplant the trains that regularly delivered audiences by the thousands to towns where presidential candidates lived. Election Day 1920 also marked the initial broadcast by radio station KDKA in Pittsburgh, sharing news of Harding’s victory. Radio killed the front porch campaign.

“By 1924,” Hall says, “you could tune in to speeches on the radio instead of traveling a couple of hundred miles to someone’s front porch.”