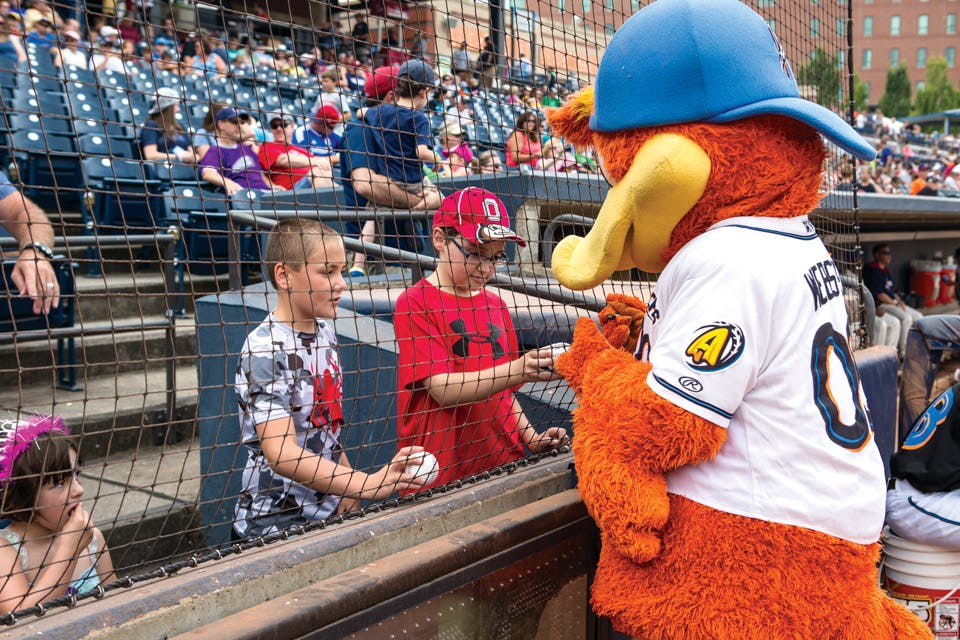 Goofy mascots, quirky promotions and great deals on ballpark food — here’s what Ohio’s teams have on deck this season.

History: Minor league baseball slid into northeast Ohio in 1989 when Vermont Mariners owner Mike Agganis moved his team to Canton. Then, during the 1990s, Agganis struck a deal to relocate his club to a brand new downtown Akron ballpark and renamed the team the Aeros. “We found we had kind of an identity problem,” says Akron RubberDucks general manager Jim Pfander. “You put 15 people in a room and asked them what an Aero was, you’d get 15 different answers.” As a nod to the region’s rubber history (and the ducks often seen paddling along a canal near the ballpark), the team became the Akron RubberDucks in 2013.

Mascot 101: Webster — a bright-orange, oversize version of the ubiquitous bath toy — helps cheer from the dugout and the stands alongside cosmic feline Orbit, the old Aeros mascot, and Homer, an 8-foot-tall, purple polka-dotted pigeon. “There’s no rhyme or reason to Homer,” says Pfander. “He’s just a fun, goofy mascot.”

At the Ballpark: Despite its relatively recent construction, Canal Park fits in with its surroundings. “It’s a brick facade on the outside that blends in with the history of all the buildings in downtown Akron,” says Pfander. Inside, fans can find all kinds of classic ballpark eats, as well as extreme-food specials, such as the 21-scoop Screamer Sundae and the Nice 2 Meat U Burger: one-and-a-half pounds of meat, a half-pound of hot dogs, a quarter-pound of cheese, bacon and onions all on a very hefty bun. “When this came out, Lewis Black from ‘The Daily Show’ picked it up,” says Pfander. “We had a woman who saw it in Tampa. She flew up specifically to try the Nice 2 Meat U Burger.” For a smaller investment, and a tasty deal, the ballpark’s regular hot dogs — made in Cleveland  — are just $2.

Promos Past: Last year, to celebrate the 30th anniversary of the classic 1980s film “The Goonies,” the RubberDucks handed out a bobblebelly (wherein the belly jiggles) of character Lawrence “Chunk” Cohen. Actor Corey Feldman, who played Clark “Mouth” Devereaux, threw out the first pitch.

Save the Date: It’s been 20 years since Christopher McDonald teed off in “Happy Gilmore,” and the Akron RubberDucks are hosting the actor May 28. The team is awarding the first 1,000 fans with a Shooter McGavin bobblehead.

History: Minor league baseball didn’t arrive in Dayton until the turn of the 21st century, but planning for the team began a few years earlier. “It was probably ’97, ’98 before everything started to happen,” says Dayton Dragons executive vice president Eric Deutsch. “We did some research: Were there any types of team names that hadn’t been used?” Dragons was available and team officials liked the alliterative sound of Dayton Dragons.

Mascot 101: Less the fire-breathing sort and more the jersey-wearing, ball-playing type, Dayton’s mascots are a pair of green dragons. “We have a male named Heater, and then we have a female who is Heater’s niece,” says Deutsch. “Her name is Gem, as Dayton has been coined the Gem City.” Recently, the team introduced Princess Sunny, who rolls into the stadium in her very own carriage.

At the Ballpark: The Dayton Dragons have had 1,121 consecutive sold-out games — an all-time record for sports in North America. Deutsch attributes the stellar attendance streak to the effort the team puts into the overall game-day experience. A large plaza in front of the park hosts pregame bands and activities. Inside, guests can order popcorn and nachos as well as Donatos Pizza, local Mar-Chele pretzels, and even salads and wraps.

Promos Past: “We have some of the best fans,” says Deutsch. “They are as loyal as the day is long.” The feeling is mutual, and the Dragons are known for their tradition of sending out season tickets in creative packages. In 2015, season-ticket holders received a cereal box in the mail. Instead of bran flakes and raisins, the “Heaties” package included their tickets for the season, gift vouchers, print and magnetic game schedules, and a Dragons keychain.

Save the Date: The team trades nightly giveaways for a few grand slam deals that run throughout the season. Eight friends-and-family nights offer savings on admission, a meal voucher and a Dayton Dragons ball cap. The first one this year is set for April 15, with the final one scheduled for Sept. 2.

History: During the 1990s, the owners of the Erie SeaWolves saw potential in Niles, Ohio, for a short-season team, which is created for players joining teams after the start of the regular season. “We tend to get a lot of the draftees that Cleveland has each June,” says general manager Jordan Taylor. This year, the Scrappers’ season opens on June 17.

Mascot 101: Scrappy grins with an underbite and sports a yellow hardhat and chain collar. The mascot and the team he represents were named not only for the region’s steel-industry heritage, but also the “fighting spirit of the people in the area,” says Taylor.

At the Ballpark: Built into the Eastwood Mall complex, the Scrappers’ home turf accommodates guests looking for a traditional, peanuts-and-popcorn ballpark experience. But Quaker Steak & Lube and Handel’s Ice Cream are on-site, too.

Promos Past: Former Ohio State Buckeyes football coach and Youngstown native Jim Tressel was immortalized with a bobblehead giveaway last season, and he stopped by to throw out the first pitch.

Save the Date: In addition to weekly deals, look for a promotion this summer honoring one of the region’s most famous rockers. “One of the unique ones we’re doing this year, which has nothing to do with baseball, [is] we’re doing a Dave Grohl bobblehead,” says Taylor, referring to the Warren native known for his work with Nirvana and the Foo Fighters. 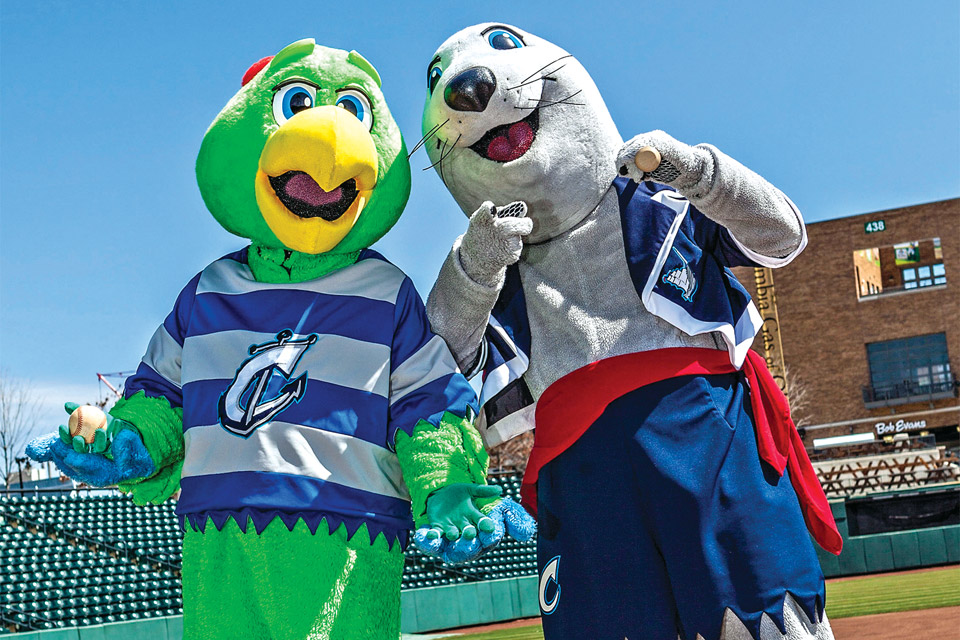 History: Baseball in our state capital dates back to 1866, when the Buckeye Baseball Club of Columbus founded the first organized team in central Ohio. Eddie Dundon, Major League Baseball’s first deaf player, was a member of the Buckeyes in 1883 and 1884 and was credited by The Sporting News for being the first person to use hand signals while umpiring a game in 1886. During the 1900s, the Senators, Red Birds and Jets called the city home before the Columbus Clippers arrived in 1977. The team played at Cooper Stadium before moving to Huntington Park in 2009.

Mascot 101: Decked out in pirate garb, LouSeal helms the Clippers’ cheering section alongside Krash, a green-and-yellow parrot. Krash joined in 2004, and LouSeal wasn’t the team’s original mascot. “The very first one we had was Captain Clipper, who had this big papier-mache head,” says team historian Joe Santry. “He sort of looked like Cap’n Crunch, but it scared the kids.”

At the Ballpark: Huntington Park is relatively new but is heavily influenced by characteristic details from classic big-league venues. “The ballpark was built as kind of a tribute to nostalgic ballparks throughout the country,” says Ken Schnacke, Clippers president and general manager. “We have a right field wall that’s a mini Green Monster. The Green Monster in Fenway Park is 37 feet tall; ours is 22 feet tall.” Knotholes purposely drilled into the outfield wall allow fans to peek at the game from outside the park, and the bleacher seats echo Chicago’s Wrigley Field. Inside, some of the concessions are a throwback, too — namely the popular Dime-A-Dog Mondays. For visitors looking for more choices than just ketchup or mustard, familiar names such as Donatos Pizza and Bob Evans level the playing field. And, unlike most ballparks, guests are allowed to pack their own picnics.

Promos Past: Some of the Clippers’ most popular events make weekly appearances at Huntington Park, including weekly pregame concerts featuring local bands. Other favorites have been one-day-only celebrations, including the annual Military Heroes Baseball Card Set giveaway (scheduled this year for July 4). Fans nominate their active or retired military heroes in advance, and 50 are honored with their profile on a baseball card as well as an on-field ceremony. Puppypalooza returns on April 26. With a human paid admission, canine best friends can tag along for a pregame Puppy Parade and special seating along the third-base line.

Save the Date: Baseball Boom, complete with inflatables and games for the kids, is set for July 1 and coincides with Columbus’ Red, White & Boom. But there are also weekly events, including live music on Fridays and Saturdays and family day on Sundays. “It used to be, we allowed the kids to run the bases, but we actually got complaints from some of the grandparents who said, ‘I want to run with my grandkids,’ ” says Schnacke. “Now we let everybody run the bases after every game on Sunday.” 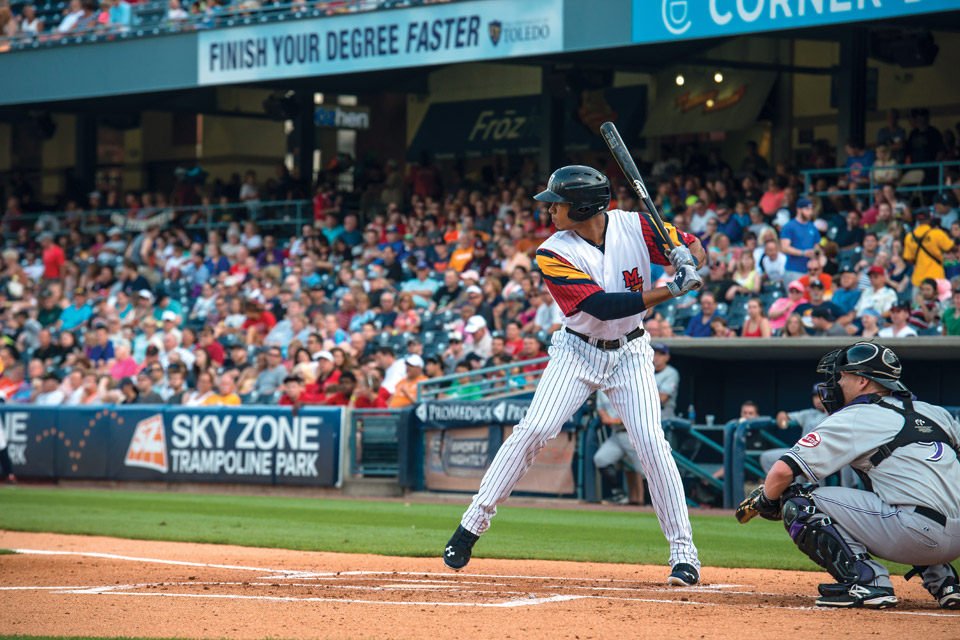 History: Back in the 1890s, Toledo’s baseball team played at Bay View Park, which was surrounded by marshland filled with coots. “Coots are a bird that are commonly known as mud hens,” explains Erik Ibsen, the team’s general manager and executive vice president. “That’s how the name came to be.” When the Mud Hens migrated to Kansas in 1955, Toledo was without a baseball team for 10 years. When the team returned to the city in 1965, it reassumed the Mud Hens name. The ballclub moved to downtown Toledo in 2002.

Mascot 101: Muddy the Mud Hen can be found roaming the ballpark during games. He’s been cheering on the team since it played at the old Ned Skeldon Stadium in Maumee. He was joined by fellow mud hen Muddonna in 2003.

At the Ballpark: “The ballpark is really intimate,” Ibsen says. “Here, you’re right on top of the action.” Seven different options along the concourse offer varied meal choices, while the full-service restaurant, The Birdcage, provides guests a view from its club-level perch. This year, fans will have even more options for pre- and post-game noshing, too, with Hensville, a new entertainment district adjacent to the ballpark.

Promos Past: To coincide with the release of 2015’s “Jurassic World,” PreHENstoric Night found the Mud Hens dressed in dinosaur-themed jerseys. A realistic-looking dinosaur character even delivered the game ball to the Detroit Tigers’ Justin Verlander, who was making his first rehab start. “We had this giant, 10-foot-tall dinosaur deliver the game ball to this huge major league star,” says Michael Keedy, the team’s director of events and entertainment

Save the Date: The weekend of May 13 through 15, the Mud Hens will host an Eggs & Bacon series versus the Lehigh Valley IronPigs, complete with egg and bacon jerseys. There’s a kegs-and-eggs party on Friday and a 10-mile Tour de Brunch community bike ride on Saturday. Fans who attend on Sunday will receive a bobblehead of Mike Hessman, the Mud Hens player who broke the minor league home run record by swatting his 433rd homer during last year’s Eggs & Bacon series.

History: Before migrating from Columbus, the Captains were known as the RedStixx, but everyone agreed that a name change was in order. “They did a fan vote when the team moved here,” says general manager Neil Stein. A salute to the team’s new lakeshore home was the winner, and the Captains took the field in 2003.

Mascot 101: Bright green and very fuzzy, Skipper is the face of the Captains. At 6 feet, he’s also the perfect older brother to a pint-size version of himself, Skippy, who makes appearances throughout the season.

Promos Past: Jobu made an appearance at Classic Park in 2014 when the “Major League” movie icon was featured as a bobblehead giveaway. “We had one of the top five crowds we’ve ever had,” says Stein. “People lined up at 4:30 in the morning for that giveaway.”

Save the Date: To mark the Republican National Convention, on July 15 through 17 players will bat in patriotic jerseys that will be auctioned off after the game. “We’re doing a President James A. Garfield bobblehead [on Sunday],” says Stein. “He lived in Mentor.”