From bold stone tributes to folk-art graves, our historic cemeteries offer a look into who we were and are.

It's hard to miss the boulder just inside the entrance of Dayton’s Woodland Cemetery and Arboretum. The stone weighs 15 tons. It is six feet long and more than five feet tall. There is no marker on the natural headstone, but many people stop to pay their respects to newspaper columnist and humorist Erma Bombeck, a Dayton native who died in 1996.

“The rock belonged to Erma’s neighbor when she lived in Arizona,” says Debra Mescher, the cemetery’s office and customer service manager. “Erma liked to climb up on the rock and write. When she died, her husband had it trucked across the country to Dayton on a flatbed truck.”

Bombeck’s is one of the newer grave sites people like to visit in a cemetery that is steeped in history. Woodland was established in 1841 after the city’s two existing cemeteries filled to capacity. Former Dayton Mayor John W. Van Cleve was one of Woodland’s original trustees. He chose the then-rural location outside the city limits because of its variety of trees, as well as its gently rolling terrain. The location, now adjacent to downtown Dayton, was also the highest point in the area. 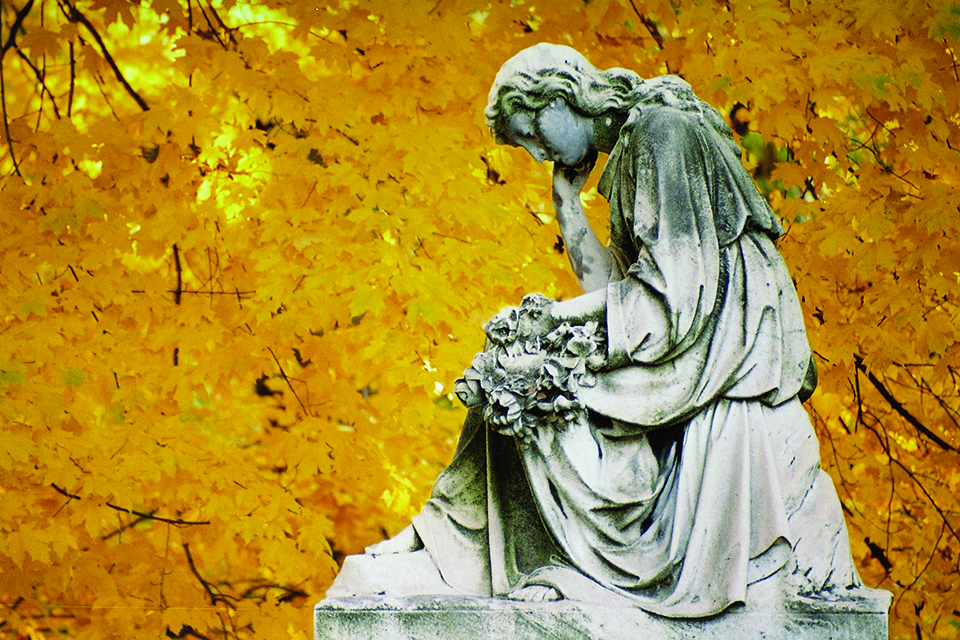 Dayton’s Woodland Cemetery and Arboretum was established in 1841. It is home to the graves of Wilbur and Orville Wright.

Van Cleve, a renowned botanist, helped shape what became known as one of the nation’s most beautiful wooded cemeteries. Magnificent family mausoleums are shaded by flowering magnolia trees, and the cemetery’s ginkgo tree was the first of its species in North America.

Visitors travel to the 225-acre cemetery to view graves of both famous and not-so-famous Ohioans. The cemetery is the final resting place of 23 Revolutionary War and 450 Civil War soldiers, as well as men who served in World War I, World War II, Korea, Vietnam and Iraq.

The burial site of brothers Orville and Wilbur Wright is the cemetery’s most visited grave — a favorite of aviation and history buffs who want to pay homage to the pioneers of flight. African-American poet Paul Laurence Dunbar, “King and Queen” of the Gypsies Levi and Matilda Stanley, former Ohio Gov. James M. Cox, and a host of inventors and industrialists who called Dayton home are also interred at Woodland.

“We try to have a more cheerful outlook on life — and death — here,” Mescher says. “I have empathy for all the families that visit. But because of our long history, we can also look at all of this in perspective.” 118 Woodland Ave., Dayton 45409, 937/228-3221, woodlandcemetery.org 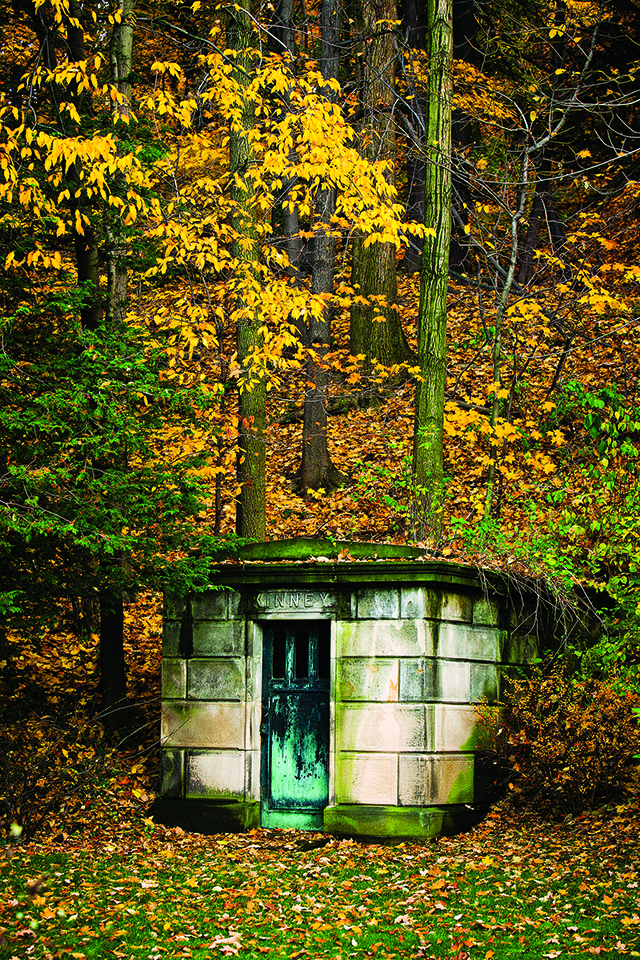 Visitors often leave dimes at the 65-foot-tall granite obelisk that marks the final resting place of John D. Rockefeller. In the 1920s, the oil tycoon and philanthropist often gave the coins to everyone he met, even the wealthy. Many visitors to his grave repay the favor, hoping that some of Rockefeller’s good fortune transfers to them.

President James A. Garfield and legendary lawman Eliot Ness are also immortalized at Cleveland’s 285-acre Lake View Cemetery. Ness gained notoriety for helping take down Prohibition-era gangster Al Capone. He also famously pursued the Torso Murderer while serving as Cleveland’s safety director. Ness’ ashes were scattered over a pond here, and visitors to his memorial have been known to leave bottles of booze.

With all that said, Lake View Cemetery president and CEO Katharine Goss doesn’t want you to get the wrong idea.

“There are misconceptions about the cemetery,” she says. “Yes, we have a President of the United States and millionaires, but 40 percent of those here come from nearby neighborhoods. And we have space for others for another 100 years. Everyone is welcome.”

Lake View opened in 1869, and because death was a fact of life for many families during the era, people spent a significant amount of time in cemeteries. They became places of romanticized beauty and quiet where families could find peace. These garden cemeteries were heavily landscaped, and it wasn’t uncommon for families to picnic there.

“You can still see the narrow buggy lanes that led people to different sections,” says Goss.

To this day, locals care for the plots of their loved ones with astonishing devotion. As Goss makes her rounds through the cemetery, she waves to one elderly man who is sitting in a lawn chair surrounded by two large sprinkling cans he uses to water the orange zinnias on his wife’s grave. “He comes every day,” she says. 12316 Euclid Ave., Cleveland 44106, 216/421-2665, lakeviewcemetery.com 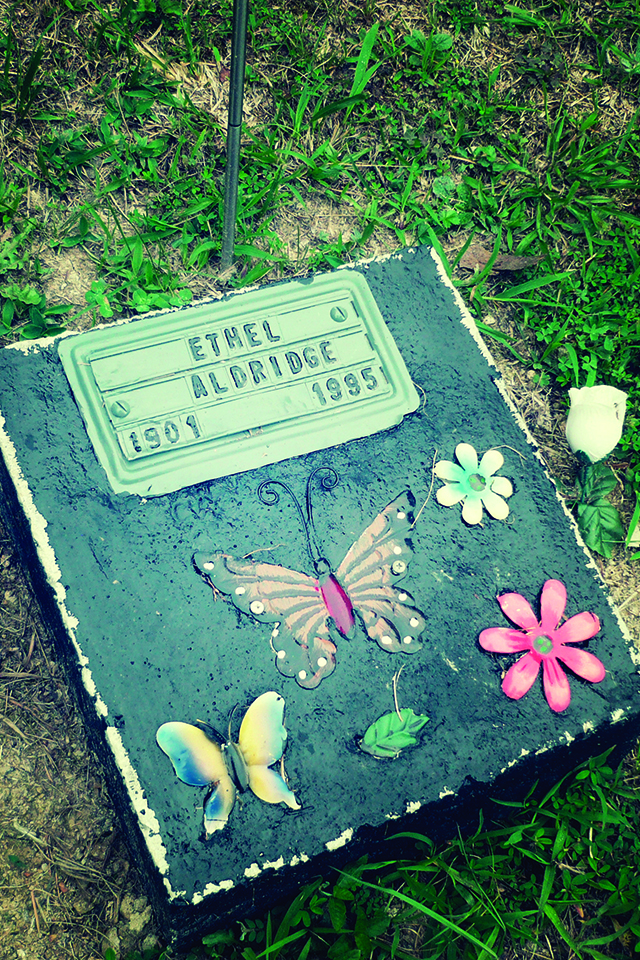 Simple graves and folk-art headstones are a hallmark of the three-acre Puckett Cemetery in rural Lawrence County.

There are no restrictions on grave markers or decorations at southern Ohio’s Puckett Cemetery, which has served as a refuge for many families who cannot afford traditional gravestones. In addition to commercially made headstones, visitors also find handmade wooden crosses, wire wreathes and hand-etched field stones simply marked “Baby Girl” or “Father.”

“Some graves have no markers at all, but people all seem to find what they are looking for,” says Carl Murdock, a member of the Lawrence County Genealogical Society. “People do their best around here.”

Locals say the land for the cemetery was donated to the community by a local ore company. During the 19th century it was most likely owned by farmer Adam Puckett, whose headstone rests atop a hill in the cemetery.

Plastic flowers — yellow tulips and red roses — adorn a number of the simple graves at the three-acre cemetery. Neither Elizabeth Township trustees nor members of the county’s genealogical society know who is behind the flower memorials, but the practice is appreciated.

“With so many people gone from the area, there are no families here to look after the graves,” says township trustee Ron Davis. “We are in a low-income area. We don’t charge families for the burial plot or to dig the grave.”

Other plots are decorated with items that would presumably please the deceased: a collection of dog figurines, a little plastic church, a whimsical resin raccoon. The folk-art tributes are fascinating, but the uneven cemetery landscape can also surprise as it reveals sobering realities, like the six graves in a neat row with two marked “mother” and “father.” It’s believed to be the final resting place of an entire family that died in a 1925 fire.

“It can be a sad place, but the cemetery is also a source of pride for me,” says Davis. “So many others around here are full of weeds.” Located at the end of Township Road 546 (west of state Route 93), Elizabeth Township, Lawrence County