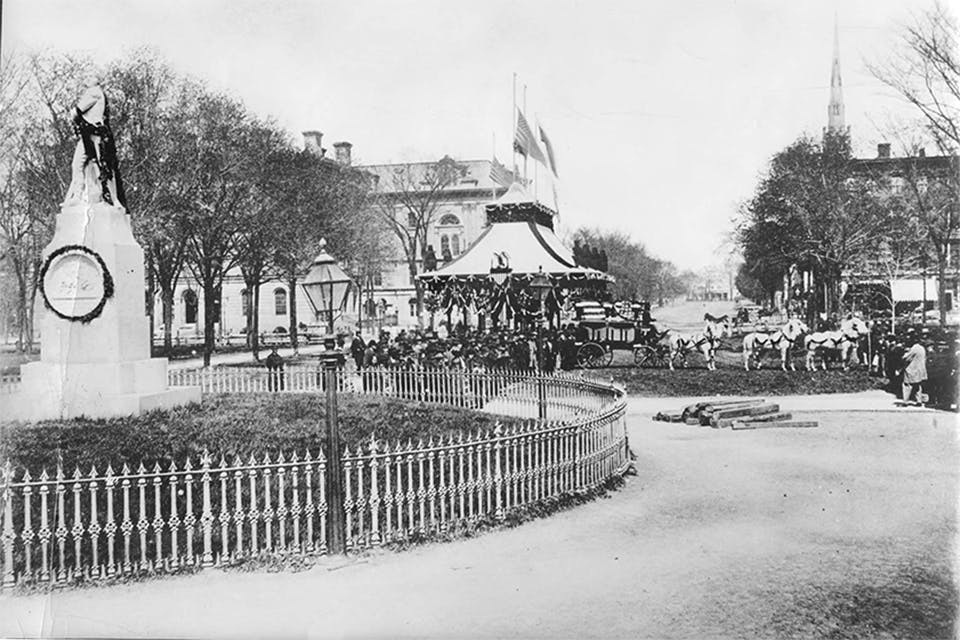 On April 28, 1865, mourners gathered on the city’s Public Square to pay their final respects to President Abraham Lincoln.

The funeral train carrying the body of President Abraham Lincoln arrived in Cleveland on April 28, 1865. It was one stop along a route that stretched 1,654 miles through 180 cities and seven states as the slain leader’s remains made their final journey from Washington, D.C., to his hometown of Springfield, Illinois.

There was a memorial service and a public viewing of the late president’s body on Cleveland’s Public Square. The April 29, 1865, edition of The Cleveland Leader newspaper offered a detailed report of the day, from morning into night.

The sounds of the city’s church bells filled the air, with the booming of cannon fire joining in as the funeral procession made its way along Superior Avenue toward Public Square. The mood was quiet and respectful.

After the casket was placed on the catafalque, an embalmer removed the lid to make sure the president’s body was presentable to the public.

“A brilliant cross of verbenas, roses, geraniums, fuchsias and all intertwined with geranium leaves was placed at the foot of the coffin and relieved some of the somberness of its surroundings,” according to the newspaper account. The report added that the city had likely never seen such a varied crowd drawn together for a common purpose. “There were no social lines, no boundaries between condition, separating those who in solemn pageant moved past the coffin that held the mortal parts of Abraham Lincoln.”

The lid to the casket was closed at 10 p.m. and a night procession began. The hearse, drawn by four white horses, followed the Guard of Honor back to the train station. The funeral train would soon be heading toward Columbus.

“Thus ended at the dismal solemn hour of midnight, the grandest funeral pageant in the history of Cleveland,” the newspaper account concluded, “our citizens testifying by the honors paid the ashes of the illustrious dead, their devotion to the principles and aims, and their deep love and reverence for the character of Abraham Lincoln.”