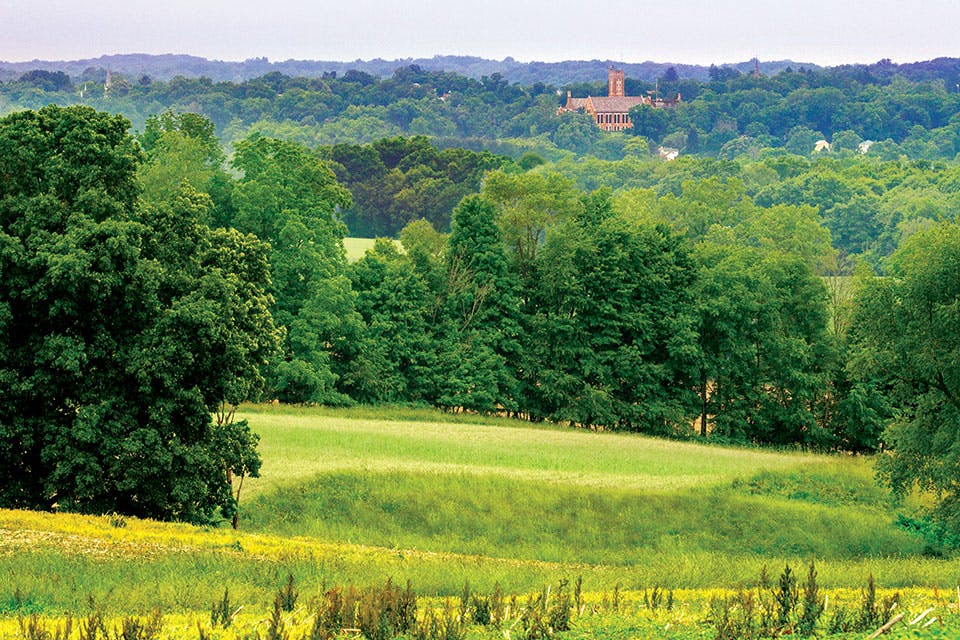 Since 1824, the school has been located in the quiet of the countryside. For two decades, the Philander Chase Conservancy has been working to keep it that way.

The farm-filled, rural countryside surrounding Kenyon College is part of the private school’s allure, but preserving that agricultural heritage and charm has been more than 20 years in the making. During the 1980s, the threat of development from the village of Gambier’s proximity to the city of Columbus, prompted Kenyon College to set up a land trust to protect the farmlands that surrounded its historic campus, becoming the first college or university in the United States to do so.

Excited by the prospect of a land conservancy, Kenyon College’s senior class of 2002 donated their class gift to help fund the purchase of 23 acres along the Kokosing River. An anonymous donor contributed the rest in the class’s name. Today, the Philander Chase Conservancy — named after Philander Chase, who founded the school in 1824 — has helped protect 5,650 acres and 66 properties contained within as part of its ongoing effort to conserve open space and natural habitats within a 5-mile radius of campus.

“I’m proud of them for knowing that development was coming,” says Lisa Schott, Philander Chase Conservancy managing director. “The college realized they had been taking this rural landscape for granted since 1888.”

Farmers within the conservancy’s footprint can sign agreements, which legally protect their land from development. Easements outline that the land only be used for farming, which helps the families keep the properties in their originally intended state. The Brown Family Environmental Center, which opened in 1995 along the Kokosing River, is included within the conservancy. The center serves as a resource for Kenyon College students and Knox County residents alike, offering 9 miles of hiking trails to explore. Future efforts include the conservancy’s involvement in developing a farming initiative that will allow Kenyon College students to live on-site and get hands-on farming experience.

“Students are able to go out in the evening and look up and see the stars,” Schott says of the Philander Chase Conservancy’s efforts. “Kenyon wouldn’t be Kenyon anywhere else, so we at the conservancy are working to save that, and in turn, the Kenyon experience.”