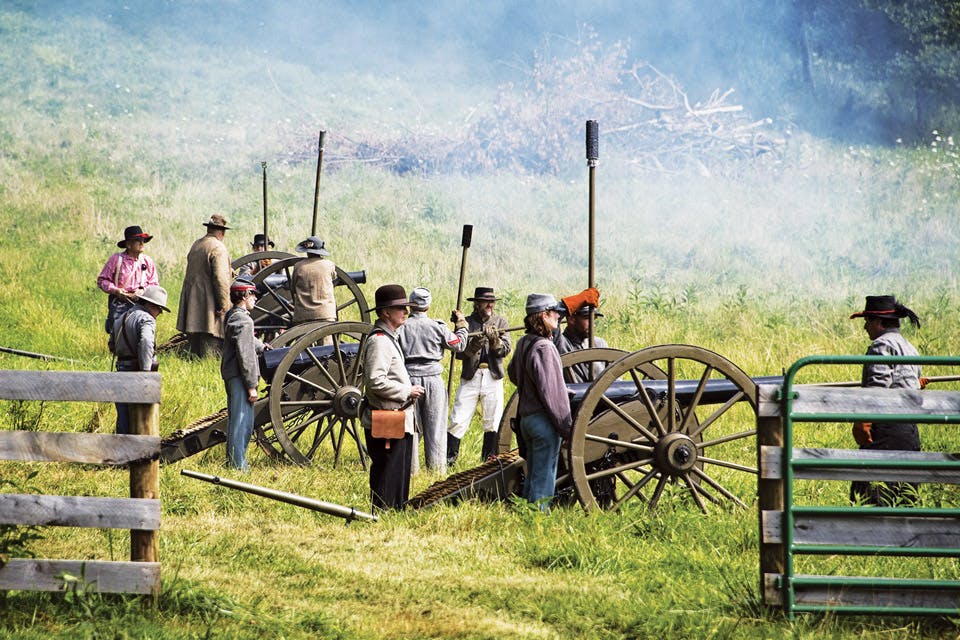 The sights and sounds of Confederate Gen. Thomas “Stonewall” Jackson’s Shenandoah Valley Campaign come to the village of Bath.

As the morning fog lifts from Hale Farm & Village in the Cuyahoga Valley this month, Ohio’s largest annual Civil War encampment will come to life with bugles, campfires and historical re-enactors beginning their day as a soldier.

“Having a re-enactment at Hale Farm fits well because the site represents a similar time period to [that of the Civil War],” explains Hale Farm & Village director Jason Klein.

The event kicks off Aug. 11 with a Civil War Education Day for kids age 7 to 12, where they will experience setting up camp and learn what food rations of the era were like.

“It is challenging to explain any war to kids,” Klein says. “We try to provide experiences that help kids relate to the people who lived during that time.”

Hale Farm & Village works with Mike Church of the Federal Cavalry Association, a re-enactment group with 17 active regiments across the eastern U.S., to determine an appropriate battle to stage.

Church, who rides with the 6th Ohio Cavalry Regiment of the Federal Cavalry Association, says the group chooses to re-enact battles that are celebrating anniversaries that end in a five or a zero, because they tend to draw more spectators and participants. He adds that the size of a battle is important, because re-enactments should be presented to scale.

“This year we are going to do the battle of Port Republic,” he says. The pivotal battle in the Shenandoah Valley Campaign, led by Confederate Gen. Thomas “Stonewall” Jackson, kept thousands of Union troops away from the Confederate capital of Richmond, Virginia.

More than 700 re-enactors are expected to take part in this year’s event, with many coming from out of state.

Two hourlong battle re-enactments are scheduled for the weekend: one Aug. 12 at 2:30 p.m. and the other Aug. 13 at 2 p.m. The weekend will also feature an Abraham Lincoln re-enactor and the Camp Chase Fifes and Drums providing music from the Civil War era. Visitors will be able to witness a variety of cavalry drills, artillery drills and foot soldier demonstrations, as well as browse reproductions of Civil War goods that are available for purchase.