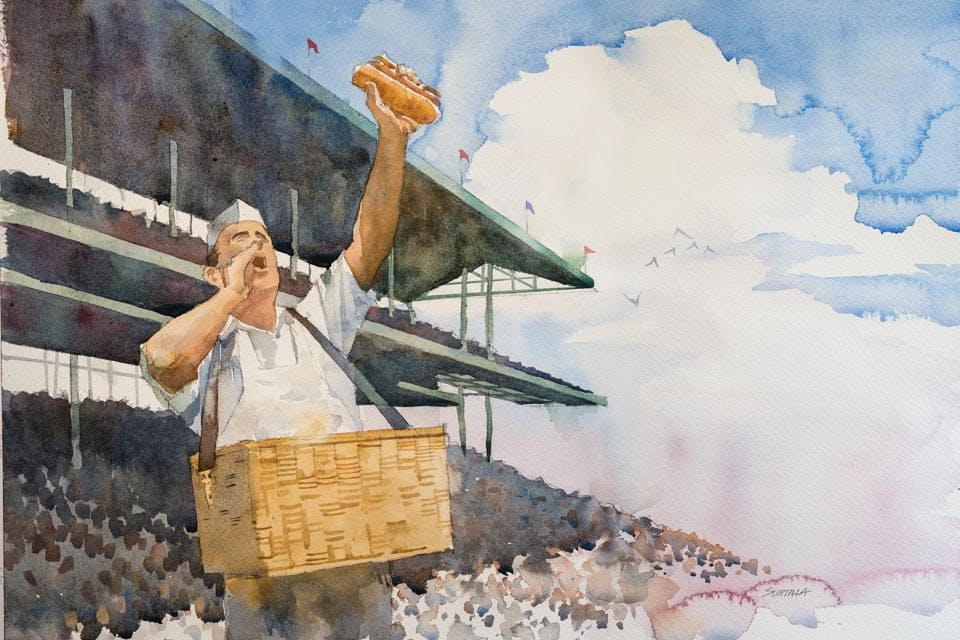 The Legacy of Harry M. Stevens

The native of England settled in Niles, Ohio, before trading his mill job for the baseball business. The innovations he pioneered remain staples of the ballpark experience.

Harry M. Stevens attended his first baseball game in Columbus during the late 1880s, a matchup between the hometown team — known variously as the Solons, a nod to Columbus being the seat of Ohio’s lawmakers, or Buckeyes — and one of the nine teams that played in the American Association.

The experience was made all the more confusing by the scorecard he bought to keep track of the action on the field: a meager slip of paper bearing each player’s name. He was sure he could do better, so he left his seat and went to the owner’s office to tell him as much.

Up until that point, Stevens had been an ironworker at a mill in the Trumbull County city of Niles and then a traveling book salesman. The sales job is what brought him to Columbus, where he attended the baseball game that would not only change the trajectory of his career but also reshape the professional game as he branched out beyond scorecards into ballpark concessions.

During his meeting with the Columbus team’s vice president, Ralph Lazarus, a scion of the family that ran the Columbus department store of the same name, Stevens offered to handle making and selling the team’s scorecards and split the profits down the middle. Lazarus made Stevens a counteroffer: He could have the ballpark’s scorecard rights for the entire season for a $500 fee.

Given Stevens’ financial status at the time, the sum might as well have been a million dollars, but he happily accepted the deal. Baseball, and the way generations of fans experience the game, was about to change.

Harry Stevens came to the United States from England with his family in 1882. He had just $5 in his pocket but heard many of his fellow countrymen were working in the burgeoning iron and steel industry in a town called Niles. When he went to a train station in New York City to buy a ticket, he was asked “Michigan or Ohio?” Luckily, he chose the latter. 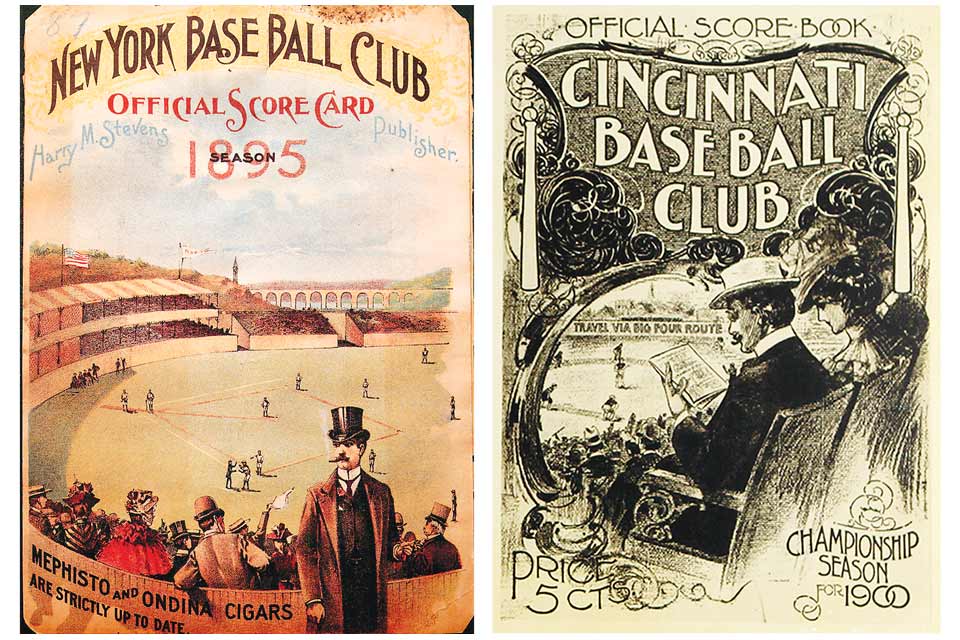 His role at the mill was stirring molten metal to remove impurities. It was difficult, potentially dangerous work, but through the sheer force of his personality Stevens became head of the union within nine months. That early success gave way to struggle though, when the mill closed in 1885 because of a strike. Stevens was nearly destitute, pawning his wife’s wedding ring and staying in his home only through the generosity of his landlord, an old German man who predicted, “You are honest. You are a worker. You will succeed and you will pay me when you can.”

So, Stevens became a traveling book salesman, first selling Irish Orators and Oratory and then adding a biography of Civil War Gen. John Logan. But after his meeting with Lazarus about producing the scorecard for his Columbus ballpark, Stevens dropped the book sales immediately. He found a printer and started selling ads, and in two days raised not just the $500 he needed but also an additional $200.

The scorecard he came up with has remained remarkably unchanged to this day. It included an illustration on its front cover and an advertisement on the back. Inside was a list of the names and positions (uniform numbers didn’t become common in baseball until the 1920s) along with room to takes notes or keep score.

Stevens was soon selling his scorecards at the Columbus ballpark, wearing a distinctive red coat and top hat as he yelled his sales pitch: “You can’t tell the players without a scorecard!”

From Columbus, Stevens branched out to selling scorecards at ballparks in Toledo and Milwaukee — even offering bilingual scorecards to cater to the large German population. He then went on to Pittsburgh in 1892, where the following year he had a fateful meeting with John Montgomery Ward, the manager of the New York Giants baseball club at the time.

“A fellow with your energy ought to come to New York,” Ward said, as recalled by Stevens during a 1926 interview with The Sporting News. Stevens told writer Fred Lieb that he had previously been intimidated by the prospect of taking on New York, but Ward’s encouragement was enough to convince him. 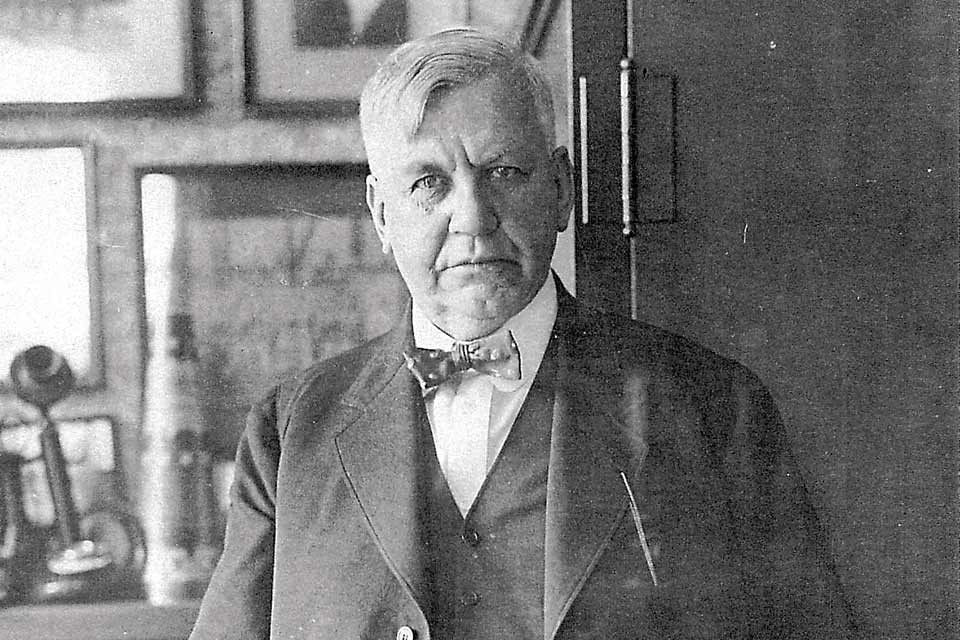 Harry M. Stevens settled in Niles, Ohio, after moving to the United States from England. After creating scorecards, he added catering to his operation. (photo courtesy of John Thorn)

Ward’s words stuck with Stevens throughout the winter and into the following spring, when he went to New York for the National League owners meeting. There he encountered Ward as well as Giants owner Cornelius Van Cott. Stevens introduced himself to Van Cott and then had to reintroduce himself to Ward, who told Van Cott, “I guess I did make him some kind of promise. … Why not give him a chance.”

Stevens did well selling scorecards, but they were a high-volume, low-margin product. A rainy couple days resulting in poor attendance or cancellations would hammer Stevens’ bottom line. Catering was where the money was, so he added concessions to his business, ultimately selling food now taken for granted as ballpark fare, including peanuts, pop and hot dogs.

Food options at sporting events at the time were typically sandwiches and beer, but Stevens’ son Frank gave him the idea of serving frankfurters while he was catering one of the six-day indoor bicycle races at Madison Square Garden in 1894.

Stevens kept the idea in the back of his mind until a cold day at the Polo Grounds, where the Giants played. Ice cream and cold drinks weren’t selling well, so Stevens bought a bunch of frankfurters and buns and started selling them instead.

Stevens’ vendors began yelling about “hot dachshunds” for sale — German immigrants brought both the sausages and the dogs to America — and the phrase captivated Tad Dorgan, a cartoonist for the New York Journal. The story goes that he didn’t know how to spell “dachshund,” so he called them “hot dogs” in his cartoon instead.

Stevens’ business continued to grow, aided in 1901 by getting the concession at New York’s Saratoga Race Course and then, four years later, at Belmont Park after owner and namesake August Belmont demanded Harry Stevens serve as caterer. Stevens’ honesty had impressed Belmont, who told him, “Name your own terms. You’ve got to set the table here.”

By the dawn of the 20th century, Stevens was operating concessions in just about every city served by baseball’s National League, and when the American League was founded in 1901 — with teams in many of the same cities — it was easy for him to expand. Because he served so many Major League teams, his menu became the standard bill of fare at the ballpark: Hot dogs, pop and beer, ice cream and peanuts. Stevens even leased farmland in Virginia to grow his own peanuts, and William Payne Whitney said Stevens was “the only man to parlay a bag of peanuts into a million dollars.”

Stevens lived in hotels in New York — first the Savoy, then the Waldorf-Astoria, the Belmont and finally the Murray Hill — but he made it a point to regularly talk to his wife and children in Niles, and he still kept a Trumbull County map in his office on Broadway. Stevens also served on the committee in Niles to build a monument to former President William McKinley, which was dedicated in 1917 and still stands today.

Stevens died May 3, 1934, of pneumonia. The following day, his funeral was held in Frank Campbell’s Funeral Church in Manhattan, which even then had sent off its share of celebrities, including famed tenor Enrico Caruso, Wild West hero-turned-writer Bat Masterson and silent-film sex symbol Rudolph Valentino.

Mourners at Stevens’ funeral, as covered by The New York Times, included Babe Ruth (who regarded Stevens as his second father), Yankees manager Joe McCarthy and former New York Mayor John O’Brien. After the service, Stevens was returned to Niles for a private funeral and burial in Union Cemetery.

The next year, Stevens’ family donated land to the city of Niles for a park that still bears his name today, and in 1984, when the city celebrated its sesquicentennial, a plaque was dedicated in his memory.

Since 2013, Niles has also been home to Harry Stevens Hot Dog Day. The annual July event features music, entertainment, a dachshund race and, of course, a hot dog-eating contest in memory of Stevens, who always made it a point to remember Niles.

“With all the success that came to Harry M. Stevens no greater tributes can be paid to him than to say of him that he was true to his old home town,” the Niles Times wrote in an editorial after Stevens’ death, noting not just his devotion, but his charity — almost always without fanfare.

“Today, I have the biggest catering business in the world,” Stevens told The Sporting News in 1926, “and from my little office here, we reach the ball parks, race tracks and sports palaces all over the country.”