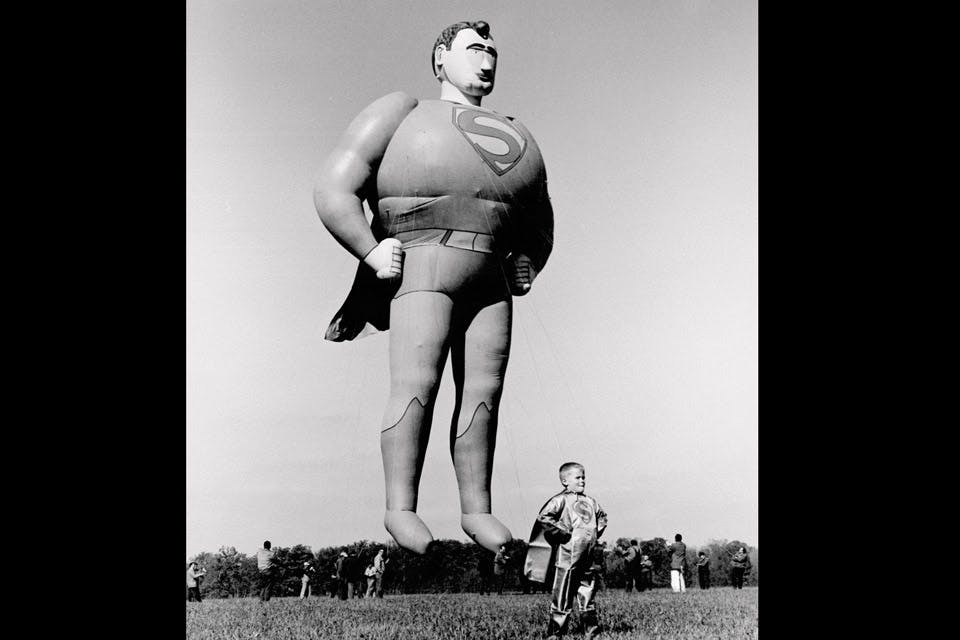 In the fall of 1966, Akron residents got a glimpse of Superman, well at least a 40-foot-tall, helium-filled version of him. One of the stars of that year’s Macy’s Thanksgiving Day Parade, the Man of Steel and Smokey the Bear were inflated near the Goodyear Tire & Rubber Co.’s headquarters to provide locals a preview of the Big Apple festivities.

The enormous balloons that float through the streets of New York City on Thanksgiving Day have a long-running connection to Ohio. Goodyear constructed the enormous inflatables from 1927 until 1981. Even after the work moved from Akron’s Goodyear plant to its Arizona and Georgia facilities following World War II, the balloons were still test-inflated and photographed in Akron to promote the parade.

In 1952, a group of Goodyear aircraft employees formed the Lighter Than Air Society, with the goal to preserve and promote knowledge pertaining to lighter-than-air flight such as blimps and balloons. “At [that] time, the big focus was on jets and rockets, so the idea of a slow-poke airship seemed to be getting lost in the shuffle,” says Eric Brothers, a board member for the organization, which still exists today with more than 600 members.

Manfred Bass, the former head designer for the Macy’s Thanksgiving Day Parade from the late 1960s until 2000, knows about the fascination people have with lighter-than-air craft. Over the years, he worked closely with Goodyear to create the enormous inflatable versions of the iconic characters Americans love.

Originally, the balloons were fairly simple designs built out of basic shapes and chambers. But as Bass developed new forms, Goodyear tackled the challenge of creating balloons that could keep up with the complexity of each new design.

“They weren’t just a sphere or cylinder,” explains Bass, who resides in New Jersey. “Superman had muscles. Superman had a face. Superman had a nose. And we had Spider-Man, [who] took his hand and spun the web right in front [of him].”

For Bass, the work he and Goodyear did on the balloons served a larger purpose than mere entertainment. He sees it as helping preserve the American tradition of families sharing time and memories together during Thanksgiving

“I can’t say enough about that holiday,” Bass says. “It’s where you sit down with grandma and grandpa and all your brothers and sisters and kids. Things get a little out of hand, kids get running around, grandma’s favorite stuffing is pulled out and there’s Macys Thanksgiving Day Parade on the TV.”