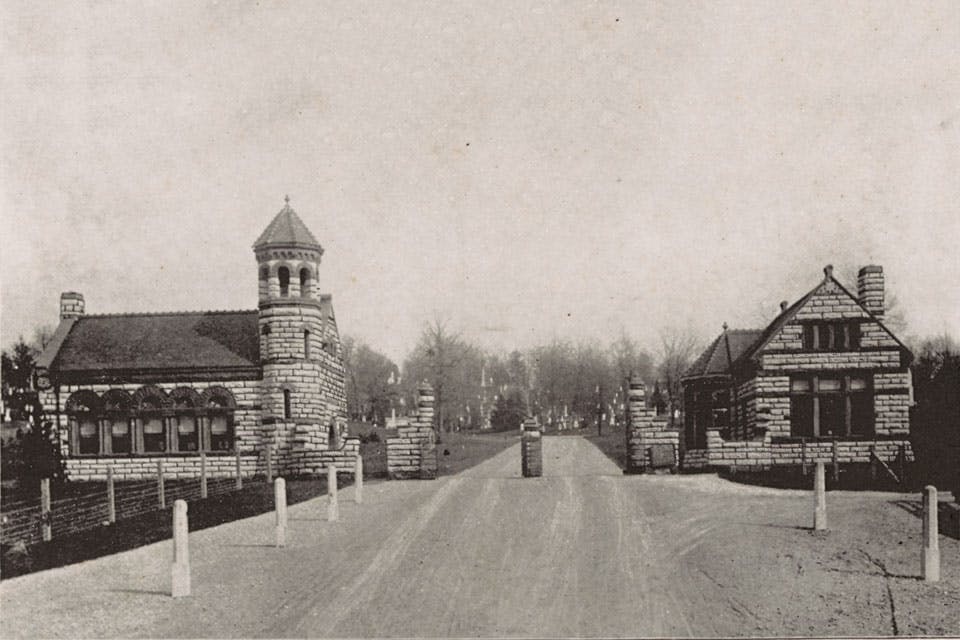 The History of Dayton’s Woodland Cemetery and Arboretum

The cemetery John Van Cleve founded in 1841 is the resting place of some of Dayton's famous names, including the men who pioneered aviation.

More than 3,000 trees dot the hills on the southeast side of Dayton. This time of year, their leaves slowly burst into reds and oranges and yellows before dropping to the ground and blowing among the gravestones and monuments scattered across what is today one of the nation’s five oldest rural garden cemeteries.

But while Woodland’s grandeur is obvious today, the story of its humble beginnings 175 years ago often goes overlooked. By 1840, Dayton had twice failed to establish an adequate cemetery in the 44 years since the city’s founding. Daniel Cooper, often considered Dayton’s first philanthropist, underwrote both earlier efforts, but the city was growing rapidly. Its population had reached roughly 6,000 citizens by 1840, and the city’s first two cemeteries ran out of burial space.

To avoid a third misstep, John Van Cleve — a one-time city mayor and civil engineer — sought out a much larger swath of land at a reasonable price. Augustus George, a carpenter in town, owned 40 acres of wooded property roughly one mile southeast of downtown that he was willing to sell. 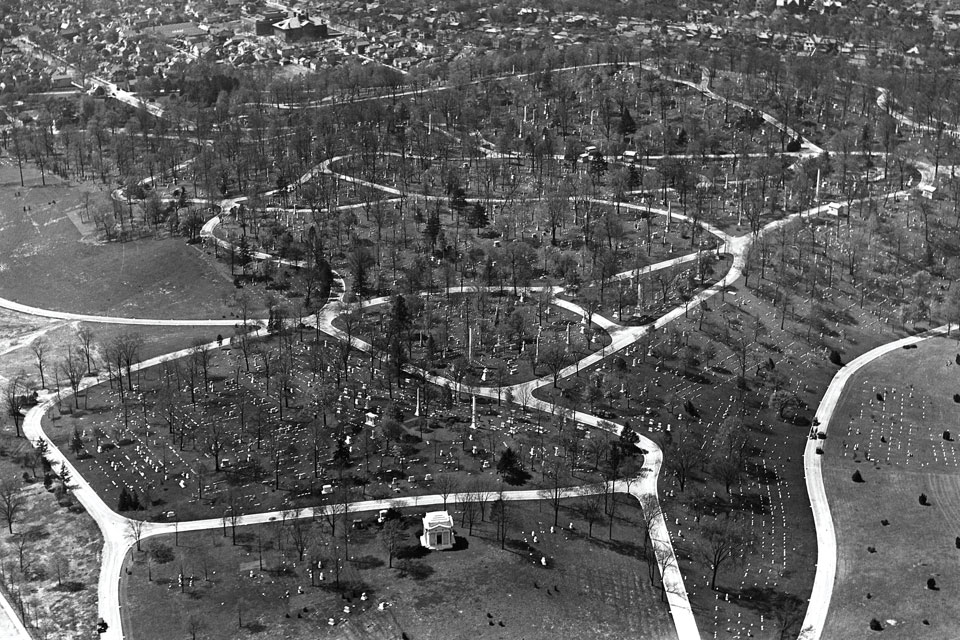 George priced his land, which was marked by steep hills and hollows, at $60 per acre. Van Cleve calculated that he would need a $100 investment from 50 citizens to purchase the property and operate the cemetery. After 52 initial subscribers stepped forward, he quickly set out surveying and platting.

In a small 1875 booklet detailing Woodland’s history, Robert W. Steele, member and president of the Dayton Board of Education and cofounder and director of the Dayton Library Association, noted that, “In 1840, a movement was made to establish a rural cemetery where every possible safeguard should be thrown around the resting place of the dead.”

The original cemetery subscribers gathered on Feb. 18, 1841, to select officers, and nine days later Van Cleve was elected president of the association, a task he would perform for the next 17 years until his death on Sept. 6, 1858.

But what neither Van Cleve nor his 52 investors could have anticipated during that winter of 1841 was just how popular his garden cemetery would become for the living who called Dayton home.

An 1867 entry in a Woodland Cemetery meeting book noted the problems caused by the cemetery’s overwhelming popularity: “Complaints having been made of the large number of persons visiting the cemetery on Sundays. And the disorder, and injury to flowers and shrubbery resulting there from … ”

After a motion, it was resolved that no person except lot owners and their families and those attending funerals would be admitted to the grounds on Sunday as a way to curtail the swarms of visitors.

“People began visiting the cemetery because it was one of the only park-like locations in the city,” says Angie Hoschouer, manager of development and marketing at Woodland Cemetery and Arboretum. “After church, you would pack up a picnic, pack up the family, and get out of the hubbub of the city.”

The same year Woodland Cemetery began to crack down on its deluge of Sunday visitors, Wilbur Wright — a distant relative of Van Cleve — was born on a farm in Millville, Indiana. 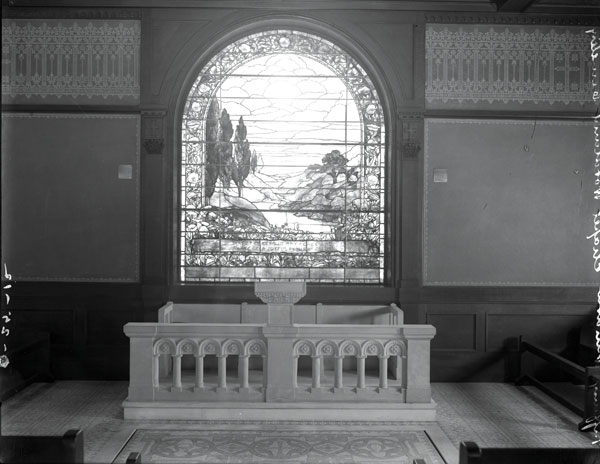 The Wright brothers’ father, Milton, was a bishop in the Church of the United Brethren in Christ, and his work kept the family on the move. In 1869, church officials elected Milton editor of The Religious Telescope, the church’s weekly newspaper, and he moved the Wright family to the home of the United Brethren Printing Establishment: Dayton.

By 1877, Milton had been elected bishop and charged with overseeing the West Mississippi District, which stretched from the Mississippi River to the Rockies. He rented out the family’s 7 Hawthorn St. home in Dayton and moved his family to Iowa. A radical in the church, Milton was involved in a feud and soon lost his position as both bishop and editor. He was named a presiding elder of the church, prompting a move to Henry County, Indiana, and then a return to Dayton in 1884.

A year after returning to Ohio, Wilbur, then 19, suffered a freak injury while playing an ice hockey-type game. A bat accidentally flew out of the hand of a young man and struck him, throwing Wilbur into a period of depression. He scrapped his plans to attend Yale and stayed home reading and caring for his invalid, tuberculosis-afflicted mother, Susan. On July 4, 1889, she died from the disease, becoming the first of the Wright family to be buried at Woodland Cemetery.

During the 19th century, deaths earlier in life were commonplace. Woodland remained a popular spot for families to picnic and commune, both with one another and their deceased family members. As a result, the cemetery officials saw the importance of keeping up and improving the grounds.

By 1889, the cemetery had grown to roughly 140 acres, and many of its legendary stories had already taken shape. Matilda Stanley, the queen of an English gypsy tribe, was buried on Sept. 15, 1878, and Daniel LaDow, a local sculptor, had already created the “boy and the dog” monument to Johnny Morehouse, a 4-year-old boy who died in 1860. It’s said the boy’s dog would come and sit at his gravesite every day, and today, people still leave toys and mementos in honor of Johnny.

In 1896, in an effort to accommodate guests during winter months, steam was piped up into the Woodland Chapel from a wood-fire boiler in the basement. That same year, the city of Dayton also held an elaborate centennial celebration starting on April 1. As a way to capitalize on their personal connection to the city’s earliest years, Wilbur and Orville Wright unveiled their first line of bicycles: the Van Cleve.

But the Wright brothers were not content to live and die as bicycle-makers. After German aviation pioneer Otto Lilienthal died from a glider accident on Aug. 10, 1896 — the same year they introduced their Van Cleve bicycle — the Wrights developed a strong yearning to fly.

In a May 1900 letter to Octave Chanute, an aviation pioneer who authored Progress in Flying Machines in 1894, Wilbur wrote: “For some years I have been afflicted with the belief that flight is possible for man. … I feel that it will soon cost me an increased amount of money if not my life.”

On June 1, 1912, a large funeral procession filed into Woodland Cemetery and Arboretum. Twenty-five carriages filled with family, friends and pallbearers poured onto the grounds to pay a final tribute to Wilbur Wright. During the 2-mile route to the cemetery, crowds lined the streets of Dayton to catch a glimpse of the father of flight being carried away. Many others had passed by his casket earlier in the day as he laid in state at the First Presbyterian Church.

Although Wilbur’s pursuit of aviation did not prove fatal, typhoid fever claimed his life within a decade of the Wright brothers’ first famous flight. 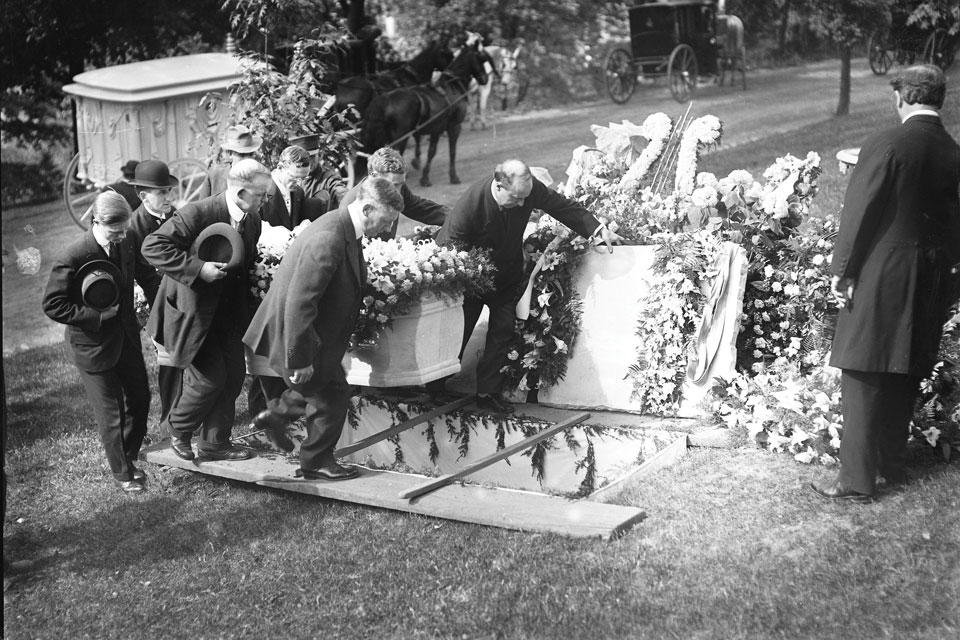 Twenty-five carriages filled with family and friends accompanied Wilbur Wright's body to his gravesite in 1912. (photo courtesy of Dayton History)

“Wilbur Wright was seized with typhoid on May 4 while on a business trip in the east,” wrote The New York Times in its May 31, 1912, edition, the day after Wilbur’s death. “Throughout the early part of his illness Wright attributed his sickness to some fish that he had eaten at a Boston hotel. He explained to his physician, however, that he had no particular reason to believe that the disease originated from this source.”

After falling ill, Wilbur held on for three weeks before dying at the family’s 7 Hawthorn St. home in Dayton at 3:15 a.m. on Thursday, May 30, 1912. Maurice E. Wilson, reverend of the First Presbyterian Church, officiated his brief service, reading “Oh God, Our Help in Ages Past,” Psalm 23 and several other hymns and scriptures.

During a 2012 centennial commemoration of the aviation pioneer’s funeral at Woodland Cemetery, legendary astronaut and Wapakoneta native Neil Armstrong gave a speech that detailed the world’s reaction to Wilbur’s death. It was the last public function at which the first man to walk on the moon would ever speak.

“Telegrams arrived from around the world and across the ocean, flowers were delivered by the truckload,” said Armstrong. “Wilbur Wright’s body lied in state, beginning at 10 in the morning, and as the mayor commented: ‘Many thousands of people passed by his casket.’ At 3:30, the city paid tribute with three minutes of silence throughout business and industry. All motion stopped.”

Wilbur was buried near his mother, Susan, in a quiet spot with a humble marker. In the 22 years since Wilbur’s mother was laid to rest, the cemetery had seen additional changes.

Henry C. Lowe of Lowe Brothers Co., a Dayton paint company, had donated $10,000 to have Tiffany Studios of New York redesign the Woodland Chapel in 1904. Five years later, the University of Dayton sold the cemetery 35 acres for an expansion, and carriages became the sanctioned mode of transportation on the grounds.

“Automobiles were banned from Woodland for two reasons,” says Hoschouer. “Their skinny tires caused ruts in the road, making it difficult for a horse and carriage to travel through, and the brake system was also not very developed in automobiles. With all our hills, the cemetery didn’t want them taking out tombstones.” 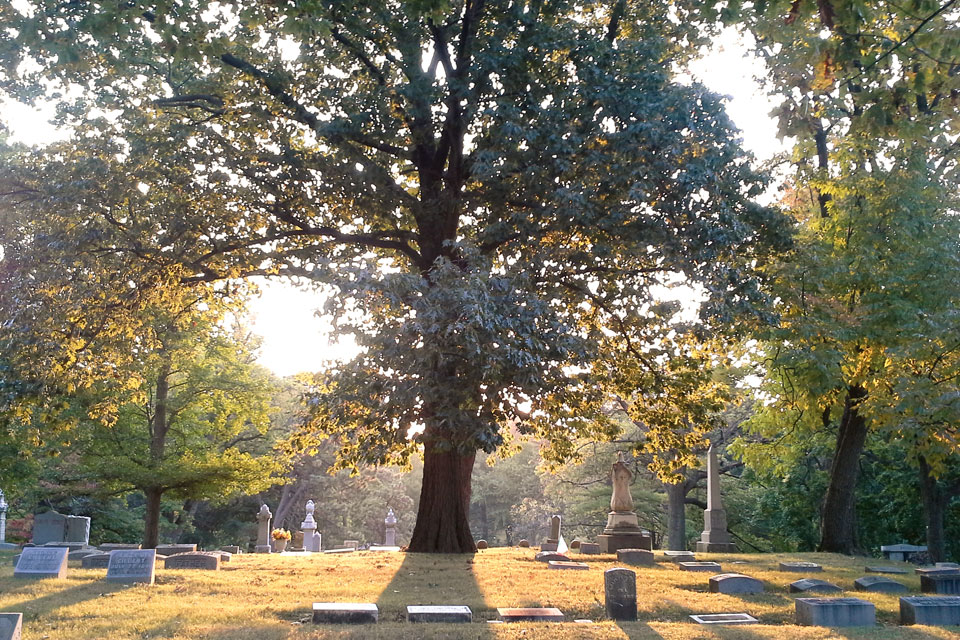 Today, Wilbur rests beside the body of his brother, Orville, who died of a heart attack on Jan. 30, 1948. They are buried in section 101, lot 2533, downhill from the Woodland lookout — the highest natural point in Dayton.

The cemetery has since grown to more than 200 acres, and 108,000 burials have taken place on its grounds during the past 175 years. As guests walk by the towering trees on their way toward the lookout and past the final resting place of the known and unknown, the groundbreaking and the commonplace, they are greeted by a view of downtown Dayton in the distance — the place where giants of history lived and worked and changed the world.

It’s a scene that far surpasses anything John Van Cleve could have ever imagined for downtown Dayton or his beautiful garden cemetery that continues to thrive along its edge.