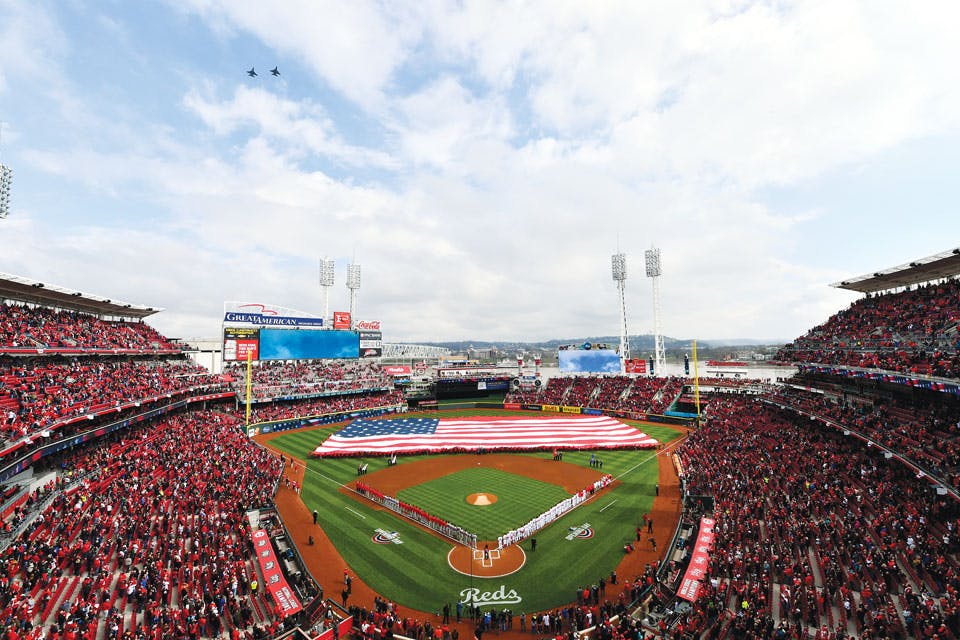 Essay: When Is Opening Day?

Why does baseball have such a hold on us? One writer delves into the roots of our eternal love for the game.

This essay ran in the April 2019 issue of Ohio Magazine.

It is a rare thing, a question that is sweeter than the answer. A swipe on your smartphone will supply the obvious: The Cleveland Indians debut at Progressive Field on April 1 against the Chicago White Sox, while the Cincinnati Reds meet the Pittsburgh Pirates at Great American Ball Park on March 28. Minor league clubs from Toledo to Dayton to Lake County will unlimber all spring. But if you mean, “When does baseball season really begin?” you’re dealing with something far deeper.

Consider the starter’s gun that is spring training, where legends are made and quickly vanish in the Sunbelt air. Rudolph Valentino Regaldo (he was named after his mother’s favorite actor) hit .447 with 11 home runs in camp for the Indians in 1954 — truly Babe Ruthian numbers — and never came near that success in the regular season. Insiders point to the winter meetings, where the season’s groundwork is set as big league clubs swap prospects like Packy Naughton and Boomer Biegalski and Narciso Crook. Odd monikers are not only plentiful in baseball, they are as essential as pine tar. Denton “Cyclone” Young came from Newcomerstown, Ohio, and is the greatest pitcher in history, notching 511 wins. Granny Hamner was a serviceable Tribe infielder and Orval Overall once hurled for the Reds. Who doesn’t remember — and love — Coco Crisp?

Love is strange. It is also blind, blue, like an itching in your heart, and a burning thing that makes a fiery ring. But that’s music. A confession: I have followed both the human demolition derby that is football and the aerial ballet that is basketball. I can appreciate a Blue Jackets power play. But baseball love feels different, like something inherited, not acquired. I don’t know if I ever “became” a baseball fan. I was born that way.

Corny? Sure, as most things that came before us seem. Out-of-date? Never. Baseball will outlive me. Maybe even you.

I admire our national pastime’s international flavor, wherein you can watch a Korean pitcher confer with a Venezuelan catcher on how to pitch to a Dominican slugger, while a manager from Iowa watches from the dugout, laying waste to a peck of sunflower seeds. When it comes to sports and race, Ohio has a tradition to be proud of. Larry Doby, Satchel Paige, Bill Veeck, Frank Robinson — the game has always been better than us.

And more resilient. Baseball has survived world wars and Wall Street crashes, outlasted steroids and numbskulls, triumphed even over AstroTurf and Bud Selig. Truth is, we now live in a Golden Age of Baseball: Players today are bigger and faster, hit the ball farther and throw harder, than any previous generation. Dabblers will grouse about “the pace of play,” finding the extended commitment of time and attention baseball requires as numbingly boring (but think nothing of binge watching reality TV or — Lord help us — the World Cup). So go. And don’t let the turnstile hit you in the back end of your bullpen. Me, I’ve got the perfume of mown grass, the crack of horsehide on ash, all wafting on a Buckeyed breeze. Like the song says, I don’t care if I ever get back — as profound an observation on the human condition as anything ever put to paper by the Bard of Avon.

And yet we do — go back that is. There is work to do, families to nurture, a world to face, one that doesn’t stay a respectful 60 feet, 6 inches away. The other game — the game of life — goes on. We toe the rubber, laboring under a pitch count. The lanky lefty warming in the pen is Mortality. But baseball abides.

And holds the answer to that question in the first paragraph. Travel Ohio Route 258 after the last snow and pause at the Peoli United Methodist Church. Wander the graveyard with a local until you find the tombstone sporting a baseball with angel’s wings, the resting place of Cy Young. Know that somewhere downstate a little girl with a poster of Joey Votto on her wall dreams with a first baseman’s mitt under her pillow because she’s a first baseman, too. Consider that right now in Cleveland a boy in a Frankie Lindor jersey is throwing a tennis ball against a brick wall and for an hour he is Frankie Lindor. Know that the game — like spring — is a promise that can be delayed but never denied. And that baseball season began the day you were born.