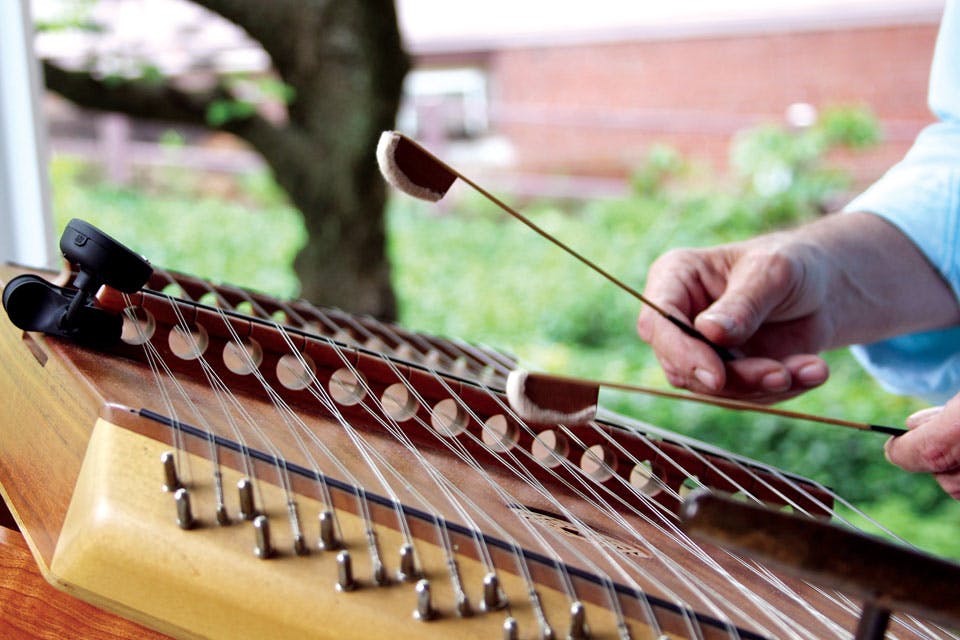 The dulcimer is hardly an instrument you’d expect to find in a modern American household or hear played around a roaring campfire. Yet, the stringed instrument known for its distinctive sound is closely tied to the Appalachian Mountains — a fact that’s celebrated each summer at the Coshocton Dulcimer Days Festival.

“It’s an instrument that you can be making music very quickly on,” says Louise Cardenzana, treasurer and organizer of the festival, which runs June 15 through 17 this year. “You can learn things that make it more complex, but with one sitting with an instructor, you’ll be playing songs when you leave.”

The mountain dulcimer — also known as the Appalachian or lap dulcimer — is shaped like a long, narrow violin and sports four strings. The hammered dulcimer, on the other hand, has more strings and a rectangular or trapezoid shape. Players hit the strings with small mallets to create sound.

“It would be as if you were playing the upper keys of a piano very softly,” Cardenzana explains.

Since 1974, the Coshocton Dulcimer Days Festival has celebrated these instruments and the history of Appalachia with performances by nationally known dulcimer players, food, vendors, raffles and participant-led jams hosted in the community’s restored canal-era town of Roscoe Village.

For those interested in embracing their musical side during the festival, hourlong $15 workshops are available on instruments ranging from dulcimers to harps to ukuleles and range from beginner to advanced levels. All beginners are supplied a free loaner of their given instrument for their allotted lesson time, and each workshop is led by a professional in the field.

“I’ve been trying to learn the mountain dulcimer,” Cardenzana says, before adding with a laugh, “[it’s] only because I don’t practice [that] I’m not making much progress.”