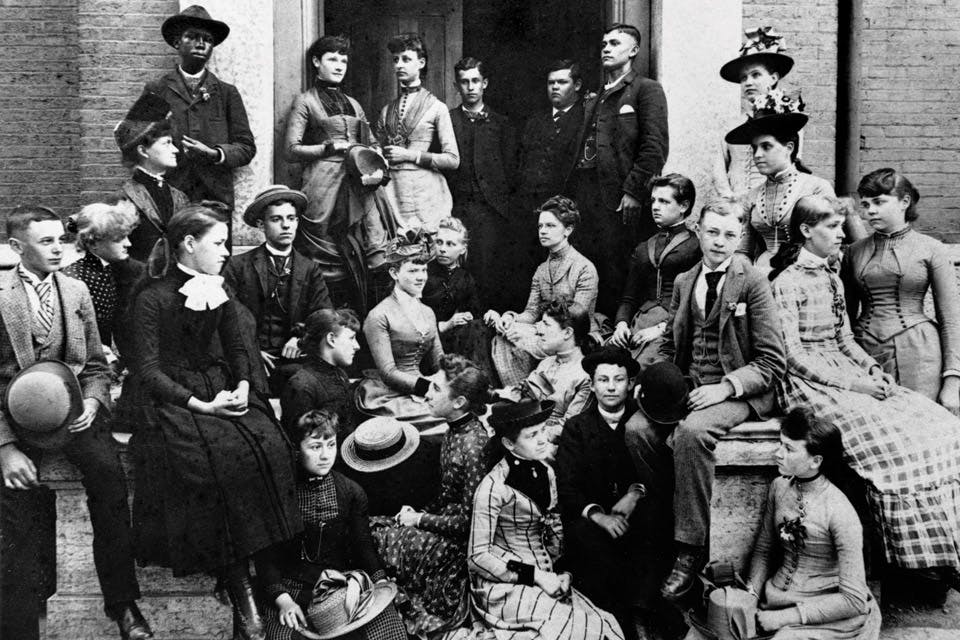 Dayton's Central High School had 27 students in its 1890 class portrait. Two went on to change the world.

May 2015 Issue
BY Leo DeLuca | Photo courtesy of Dayton History

May 2015 Issue
BY Leo DeLuca | Photo courtesy of Dayton History

He is among more than two-dozen stylishly dressed students gathered for their class portrait. Under their bodices, the girls wear chemisettes adorned with buttons and bows, and boaters decorated with ribbons and silk flowers. The boys sport tailored coats, vests and derbies.

Tucked in the middle of the back row, not far from Dunbar, stands an average student who willingly dropped out of Central High School in the summer of 1889, sometime after the class photo was taken. The young man’s hair is neatly combed, a decorated lapel accents his black suit, and his hands rest behind his back. The student’s name is Orville Wright.

By the time the Central High School class of 1890 received their diplomas, Dayton was the nation’s 45th largest city with a population of 61,220. Benjamin Harrison had recently succeeded Grover Cleveland as President of the United States and Gustave Eiffel had just completed his famous Paris tower for the 1889 World’s Fair.

“What dreams we have and how they fly, like rosy clouds across the sky; of wealth, of fame, of sure success,” Dunbar later wrote in his poem “Dreams.”

Success found both Paul Laurence Dunbar and Orville Wright, but while walking the halls of Central High School the young men were far from famous. They were simply two unassuming friends who, remarkably, landed in the same small class of 27 students.

Paul Laurence Dunbar’s parents were former Kentucky slaves. With an absent father, Dunbar and his mother moved frequently through his years at Central High School, but the lack of consistency didn’t seem to faze him. Dunbar was a contributor to and editor-in-chief of the High School Times as well as a member of the literary and drama clubs.

“I believe his experience at Central High School provided Dunbar with the belief that it was possible to be a writer,” says Ann Honious, a deputy superintendent with the National Park Service and author of What Dreams We Have: The Wright Brothers and Their Hometown of Dayton, Ohio, a book that includes an entire chapter dedicated to Dunbar. “At an integrated school, and as the only African-American in his class, Dunbar was exposed to opportunities and possibilities that he might not have previously considered.”

Dunbar was talented, creative and well liked, and his name filled the pages of the school newspaper.

“I was the only Negro in the class and apparently popular,” Dunbar later said, reflecting on his high school years. “My chums encouraged me. My teachers encouraged me.”

Orville Wright, on the other hand, was considerably less memorable. According to Tom Crouch’s The Bishop’s Boys: A Life of Wilbur and Orville Wright, Orville’s ninth-grade botany instructor William Werthner described him as, “A quiet, reserved boy, faithful in his work, but not strikingly different from the rest.” The book also notes that Orville received a 79 in Latin, a 92 in botany and an 86 in algebra during his freshman year.

“When designing the airplane, the Wrights could get what they needed with algebra,” explains Crouch, senior curator of aeronautics at the Smithsonian’s National Air and Space Museum. “While Wilbur didn’t officially pick up his graduation certificate and Orville was, in fact, a high school dropout, what they got from high school was, after all, enough to enable them to invent the airplane. In that sense, high school gave them a pretty good background.”

Orville Wright was one of seven children (a set of twins died soon after birth) and four Wright brothers. His father, Milton, was a bishop in the Church of the United Brethren in Christ and, according to remarks made by the Wright children, any mechanical proficiency was inherited from their mother, Susan Koerner Wright.

For Orville, problem solving began early in life. Using hand-engraved woodblocks and his father’s letterpress, he tinkered with printing — an enterprise that would continue to pique his interest during high school.

Around 1886, around his freshman year, Orville and his boyhood friend Ed Sines started a printing business: Sines & Wright. They set up shop in the Sines’ kitchen before moving to the Wright family home at 7 Hawthorn St. Soon after, Orville’s older brother Wilbur joined the printing enterprise, marking the Wright brothers’ first foray as business partners.

On July 4, 1889, Susan Wright died from tuberculosis, leaving 17-year-old Orville motherless right before his senior year. Rather than graduate, he opted to leave the class of 1890 and focus on his printing enterprise. One of his earliest printing clients was Paul Laurence Dunbar.

While not credited to Dunbar, the Wrights’ West Side News featured a poem peculiarly similar to the poet’s singular style. Dunbar wrote standard compositions, but he also wrote in the dialect of his race, and it was very distinct. According to Honious, legend also has it that while the Wrights were moving their business to Dayton’s Hoover Block, Dunbar stopped for a visit and scribbled a tribute to Orville on the wall: “Orville Wright is out of sight / In the printing business. / No other man is half as bright / As his’n is.”

Having a close friend in the printing business afforded Dunbar the ability to start his own newspaper, the Dayton Tattler, for the city’s black community.

“It’s fascinating to consider that two internationally significant figures were in the same high school class,” says Alex Heckman, director of education at Carillon Historical Park in Dayton. “In a 1934 letter, Orville commented that he and Dunbar were ‘close friends in our school days … we published a five-column weekly paper for people of his race; i.e.; we published it as long as our financial resources permitted, which was not for long!’ ”

Only three issues of the Dayton Tattler are known to exist. The first edition features a particularly intriguing headline: “Airship Soon to Fly,” with Dunbar writing in reference to E.J. Pennington’s dirigible flying machine.

Dunbar and Wright eventually grew apart. Following high school, Dunbar first worked as a janitor at National Cash Register before becoming an elevator operator at the Callahan Bank Building in Dayton. He wrote prolifically throughout this time. Along with printing, Orville and Wilbur Wright opened a Dayton-based bicycle company. They also started studying aeronautics.

On Dunbar’s 24th birthday — June 27, 1896 — he received a glowing Harper’s Weekly review from the prominent Ohio-raised literary critic William Dean Howells. The review quickly brought him fame, and he was soon traveling internationally. Dunbar worked many jobs throughout his life, including a stint at the Library of Congress in Washington D.C. He also received support from the famous African-American social reformer Frederick Douglass. Years later, Dunbar would inspire writers Langston Hughes, Zora Neale Hurston, Toni Morrison, Maya Angelou and many others. Angelou titled her 1969 autobiography I Know Why the Caged Bird Sings after a line in Dunbar’s poem “Sympathy.”

By the end of the 19th century, Orville’s fascination with flight took full form. On Dec. 17, 1903, with Wilbur running beside the Wright Flyer, Orville made the world’s first controlled, powered, sustained flight on the windy beaches of Kitty Hawk, North Carolina.

As years passed, Dunbar and Orville Wright never regained the closeness they had in high school. Dunbar died on Feb. 9, 1906, at the age of 33 from complications brought on by tuberculosis. He is buried in Dayton at Woodland Cemetery. At his grave, a simple Tiffany bronze plaque fastened to a boulder features the first stanza of his poem “A Death Song.”

Although Woodland Cemetery covers roughly 225 acres, by sheer coincidence, the world’s first internationally acclaimed black poet and the world’s first airplane pilot rest mere steps from one another in section 101.

Here they lie. Reunited in the end. Old friends. Two Central High School classmates who were determined to test the world’s boundaries.