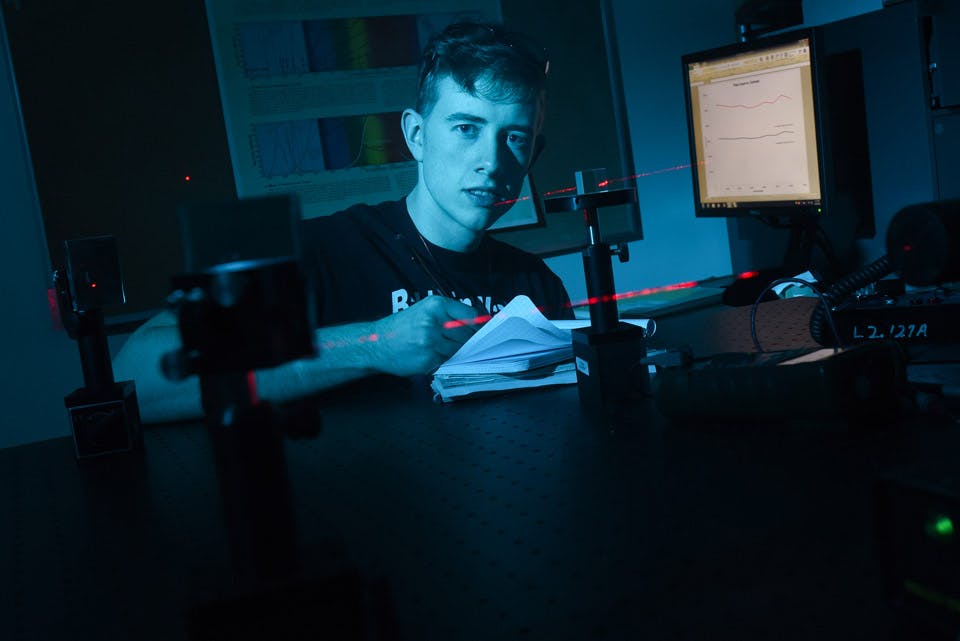 During his 2011 State of the Union address, President Barack Obama stressed the tie between the quality of the nation’s math and science instruction and the United States’ economic prosperity. That night, he called for preparing 100,000 excellent STEM (an acronym for science, technology, engineering and math) teachers over the course of the next decade and with good reason. According to a report from Georgetown University’s Center on Education and the Workforce, there will be 8 million U.S. jobs in STEM-related fields by 2018. (That number was around 6.8 million at the time of the president’s 2011 speech.) Here’s how Baldwin Wallace University and three other Ohio colleges are responding to that opportunity with programs to attract new students to STEM fields and help them succeed.

Developing personal and professional networking skills are key components to Baldwin Wallace University’s STEM Scholar program. Students learn techniques for interviewing, the importance of internships and other real-world skills that supplement the knowledge gained in the classroom.

“We like the students to see the STEM fields as a business or entrepreneur opportunity,” explains Jacqueline Morris, director of neuroscience. “We want them to make the connection ... to make their education into a career.”

Baldwin Wallace’s STEM Scholar program was launched in 2008 through a partnership with the University of Akron. It started with 10 students and has grown to more than 100 in the program.

One in four students declare a STEM major at Baldwin Wallace, and statistics show those who are a part of the STEM Scholar program are twice as likely to graduate in four years compared to their counterparts who are not.

“The program offers holistic support — financially, academically and socially,” says program coordinator Stephanie Forstner. “Each student gets a success coach who stays with them throughout their college experience, and there is a real sense of community within the STEM program.”

The Living Learning Community, a dormitory that allows both STEM Scholar program participants and other STEM students to live in the same building, aid those connections. Samuel Schwab, a senior physics and philosophy major at Baldwin Wallace, has lived in the Living Learning Community for all four years. “I love it,” he says. “I was lucky enough to connect with some students and created a hands-on calculus course with a professor last semester.”

Columbus State Community College’s STEM scholarship program, Future Scientists of Ohio, focuses on keeping students connected to their classmates, campus and home state. Launched in 2009, it gives students a full-tuition scholarship that allows them to complete their Associate of Science degrees and readies them for the next phase of their education.

“We saw that there was a need for more students in STEM fields,” says assistant chemistry professor Adam Keller. “So, as a community college, we partnered with Ohio State [University] to create a program that keeps students retained in a STEM field for their first two years and allows them to transfer into bachelor programs.”

Initially, 25 incoming freshmen were awarded the scholarships, but the program and the number of students has grown. This year, 34 students were accepted into the program, and Keller says the college hopes to increase that number to 50 in the near future. Because Columbus State is a commuter school, the program works to keep STEM students engaged and on campus by helping create a support system for them. STEM club meetings, academic advising and tutoring are among the offerings.

Future Scientists has helped students get internships at places such as the Wright Brothers Institute: Tec Edge Innovation & Collaboration Center in Dayton and Columbus NanoWorks.

Since 2008, the University of Akron’s Choose Ohio First Scholarship Program has blossomed from a group of 27 students to one that now has more than 600 participants. Directed toward low-income, first-generation and minority college students, the goal of the program is to attract candidates who would not typically pursue a STEM education while providing them the support to succeed in the field of their choosing.

“The students learn that this is not just a scholarship, it’s a program,” says assistant vice president of student success Adam Smith. “It’s important to support and encourage these students who wouldn’t typically go into STEM fields. They receive a huge amount of support from our staff, like our retention specialists who work with every student to set academic and life goals that are monitored throughout the school year.”

Erin Culver, a fourth-year chemical engineering major, had a co-op with Tenneco automotive in Milan, Ohio, where she worked with a group that created specialty elastic polymers. “The program has been great,” she says. “They provide a number of resources that make your college journey easier.”

Advisers and student mentors make sure program participants are doing well inside and outside the classroom. “This program has been life-changing,” says junior biomedical engineering major Eric Leaks. “I’ve never been around something so positive. … I know I’m not just a number and if it wasn’t for this program, I would not still be in school.”

This past summer, the university received a $34,278 TIDES initiative grant from the American Association of Colleges and Universities. TIDES, or Teaching to Increase Diversity and Equity in STEM, gave 20 universities across the U.S. funding to supplement their computer science programs in ways that will help increase the retention of under-represented students.

Statistics from the National Science Foundation show that the percentage of women in the fields of computer sciences and engineering has remained below 30 percent since 1991.

“We thought about what we can do to make our curriculum more inclusive of women,” says Eric Baumgartner, dean of the school’s College of Engineering. “One way is to teach programming through storytelling and to offer computer science courses through the English department.”

Interactive storytelling is a hybrid of writing and computer programming, and Ohio Northern University plans to offer an extra-disciplinary seminar titled “Writing Interactive Fiction” this fall.

“The key idea is based on the reframing of programming tasks to … interactive-fiction-writing tasks,” explains assistant professor of computer science Alexandra Coman.

“These creative tasks incorporate students’ own interests and empower all students to find their own place in the computer science field by turning its tools into means of self-expression,” she adds. “We expect women students to particularly benefit from this.”