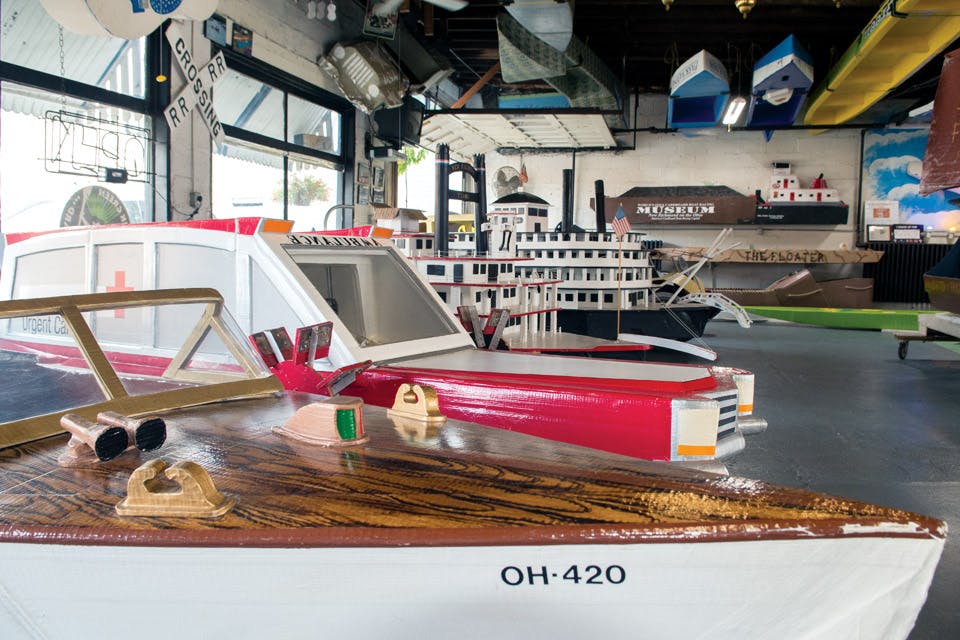 Some of the most memorable participants in New Richmond’s annual Cardboard Boat Regatta are immortalized in a former gas station.

It sounds like the start of a joke: What do a Viking ship, a John Deere tractor and the SS Minnow have in common? Actually, it’s a riddle, and the answer would elude most people — unless they live in New Richmond.

That’s where, in 2007, a former gas station became the Cardboard Boat Museum. It’s filled with fun, homemade vessels that have sailed down the Ohio River in the town’s Cardboard Boat Regatta, held every August.

“Cardboard, tape and paint,” says Ray Perszyk, organizer of the annual regatta, as he outlines the only three materials boat-makers are allowed to use in crafting their vessels. “If somebody wanted to put a sail on, that can be some other material — as long as the construction of the hull itself is made out of those three things.”

The annual event began 25 years ago as an idea dreamed up by longtime residents Jim and Shanna Morarity. These days, the regatta sees around 70 boats at the starting line, and there are some pretty elaborate creations. One repeat competitor, an engineer for Ford Motor Co., has designed boats that look like hot rod cars, the head of a walleye and even an outhouse.

“We’ve had airplanes, we’ve had a school bus,” Perszyk says, “and a lot of this stuff is in the museum.”

More than 30 boats are on display at the museum, which is open year-round. There’s no admission charge, but Perszyk, who helped open the venue a decade ago, encourages visitors to make a donation to help support the operation.

“It seemed like a good idea to highlight this stuff and share it with the world,” he says. “We’re the world’s only cardboard boat museum, and we’re America’s cardboard boat river racing capital. If somebody wants to challenge it, have at it.” 311 Front St., New Richmond 45157, 513/403-1675, cardboardboatmuseum.com