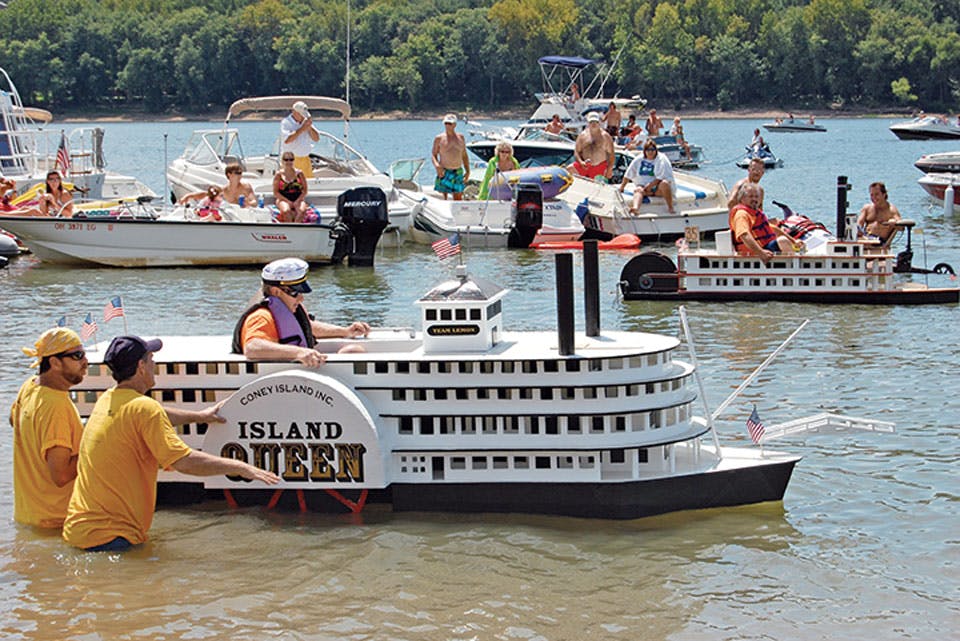 Wood, steel and fiberglass all are great boat-building materials. Cardboard? Not so much. Don’t tell the folks in New Richmond that, though. For more than two decades, the village, which is located about 20 minutes southeast of Cincinnati, has hosted an annual boat race featuring vessels crafted only from corrugated cardboard, duct tape and paint.

Around 5,000 people turn out each summer to witness the Cardboard Boat Regatta, which typically takes place the third weekend in August. On average, more than 70 participants build boats they paddle down a 200-yard course on the Ohio River. The race awards 27 wooden paddle trophies for a variety of achievements, ranging from fastest racer to most creative boat. Ray Perszyk has been involved with the race since its second year.

“It’s one of those events that I can honestly say, I’ve never seen anyone walk away without a smile on their face,” he says.

The Festival: River Days has been New Richmond’s primary festival since the 1970s. Originally occurring over the Fourth of July, it was eventually moved to the month of August to get more exposure. Fair food, gambling tents, live music, a rib cook-off and carnival rides are all part of the three-day celebration, and the boat race is the centerpiece of the event. “Shanna and Jim Morarity started it 23 years ago,” says Perszyk, adding that the couple is still involved today. “They had an idea to build boats on the beaches of the river. They provided cardboard and tape and said, have at it.”

The Boats: These days, participants put a lot of time into their boats, and Perszyk knows the secret to keeping one afloat. “You paint it five times with latex-based house paint, and once you think you have it painted enough, you paint it three more times.” The trick to keeping the boat upright, he adds, isn’t in the paint, but in the tape. “People forget to seal the inside, and then water can seep in.” Even if you spring a leak, you can still end up a winner. A Titanic award goes to the most dramatic sinking.

The History: See boats from races past at the Cardboard Boat Museum. Housed in a former gas station, the free attraction is home to more than 30 vessels, including a Batman-themed boat and a replica of a Hacker-Craft motorboat. Museum volunteers make boats for local businesses as well as for themselves. One year, they built a replica of the Island Queen riverboat, which is on display at the museum. “That [riverboat] was in the Cincinnati area for years,” says Tom Lemon, one of the museum’s co-founders. “We said, hey, let’s do the Island Queen because everybody knows about it.”