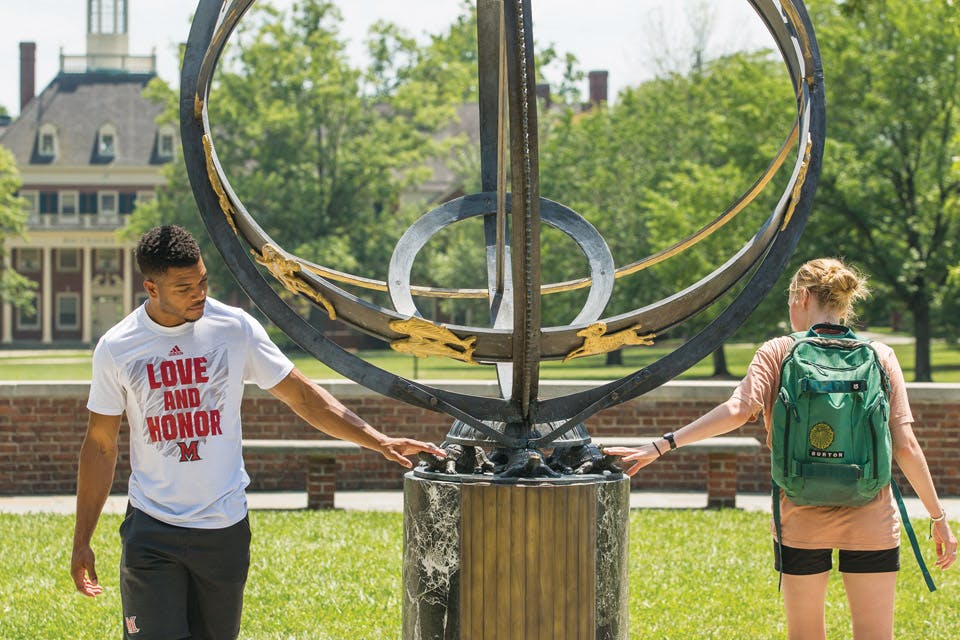 Universities may be all about higher learning, but students still engage in some well-worn rituals (you know, just in case). Here are some our favorites from Ohio colleges.

Miami University, Oxford: It’s said couples who kiss under the Upham Hall arch are destined to marry. “I can personally vouch for that,” says Ray Mock, past executive director of the college’s alumni association. “I had just begun a relationship with a woman and was giving her a tour of the campus. I told her about the arch, and she playfully kissed me on the cheek. Jill and I have been together 36 years and married for 33.” Another Miami University superstition involves the sundial on campus donated by Delta Delta Delta sorority. Tradition says if you rub the heads of the turtles on the sundial’s base, you will have good luck on your next exam.

Bowling Green State University, Bowling Green: For years, stories circulated about Alice, a ghost who haunted the theaters in University Hall. Lesa Lockford, chair of the department of theater and film, isn’t sure Alice made the move to the new Wolfe Center for the Arts in 2011, but the superstitions surrounding her presence have continued from the earliest performances there. “I made sure the stage manager fulfilled his or her duties at the end of the final dress rehearsal,” says Lockford. “We all walked out and turned off all the lights except for the ghost light — a single bulb [on a light post] rolled on stage. Then the stage manager invited Alice to a performance.”

The Ohio State University, Columbus: Couples who stroll The Oval hand in hand can ensure they’ll be together forever ... as long as certain conditions are met. The chimes from the Orton Hall tower must be pealing and no one can cross your path. “Some couples actually station people to prevent others from walking in front of them,” says university archivist Tamar Chute. Students hoping to gain an academic edge visit the Thompson Library, where it’s said rubbing the bronze bust of former Ohio State president William Oxley Thompson will help you ace your next exam.

The College of Wooster, Wooster: When the weather cooperates, students attempt to pile the snow high enough to block the two main building entrances under the Kauke Hall arch. “The legend is that if students fill the arch with snow, classes will be canceled the next day,” says John Hopkins, associate vice president for college relations and marketing. He witnessed the last attempt in 2014 and many others over the years. Without shovels at their disposal, hundreds of students use wastepaper baskets, plastic totes and even their hands to pitch in.“It takes four or five hours,” Hopkins says. “It’s hard work.”