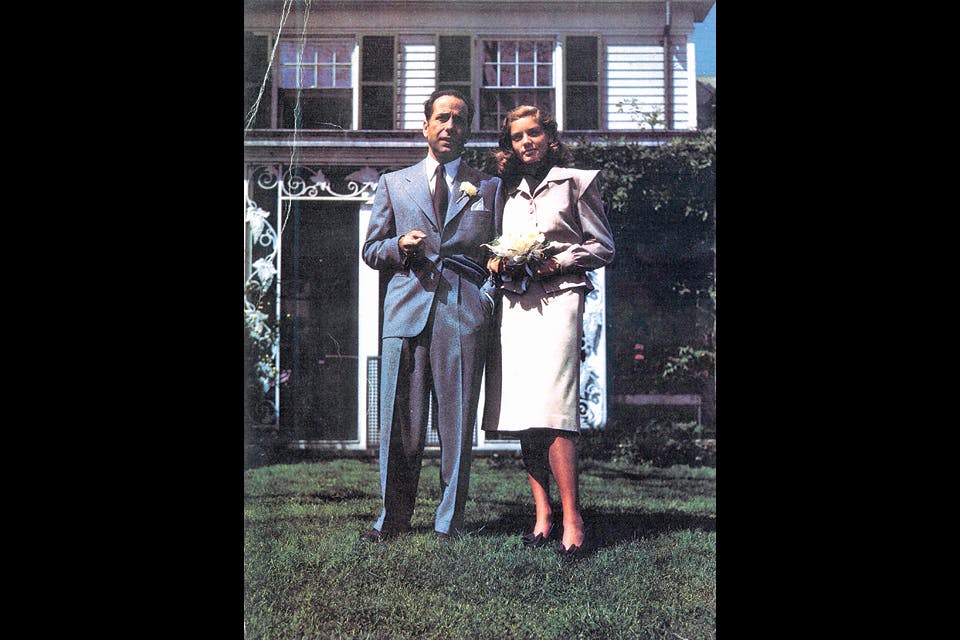 1945: Bogie and Bacall Get Married

She was known for her husky voice and attention-grabbing good looks. He was famous for his tough-guy roles in films like “Casablanca” and “The Maltese Falcon.” Lauren Bacall was 20 and Humphrey Bogart was 45 on May 21, 1945, when the couple exchanged vows at Malabar Farm, owned by their friend and bestselling novelist Louis Bromfield.

The Mansfield News-Journal reported that the small affair — including a brief 3-minute ceremony — could have belonged to just about any ordinary couple if not for the media frenzy occurring outside Bromfield’s home.

“To an onlooker it might have been the girl across the street and the boy on the next block getting married,” wrote the Mansfield News-Journal’s Marguerite Miller. “And the reporters and the camera men might have been aunts, uncles and cousins of the pair.”

The silver-screen icons hosted two press interviews for the occasion: one immediately before the ceremony and one immediately after. Bacall, visibly showing signs of nervousness, told reporters she was “so excited” for the wedding. Reporters commented that Bogart appeared nervous as well.

When the time came, Bromfield’s daughter Hope played the “Bridal Chorus” on piano as Bacall descended the stairs and approached the improvised altar, decorated with hemlock, willow, maple, elm and white snapdragon flowers. Bromfield served as Bogie’s best man, while Bacall’s mother, Natalie Bacall, was the only bride’s attendant. The man tasked with giving away the bride was Bromfield’s manager, George Hawkins.

Bacall wore a rose-beige doeskin suit accented with two “pure white” aculeata orchids, Bogart wore a classic grey suit with a maroon tie, complete with white carnation for the occasion. A small number of friends and family enjoyed the ceremony and reception, although one member of the Bromfield house was not as impressed. Miller reported that the author’s Boxer, named Prince, broke into the ceremony and plopped down at Judge Herbert H. Schettler’s feet “with utter disregard for what was transpiring.”

After the exchange of rings, Bacall presented Bogart with a gold house key to the couple’s new 19-room “bungalow” home in Hollywood, which Bacall told reporters was still in escrow at the time. After spending their wedding evening at Malabar Farm, the newlyweds departed the next morning to return to Hollywood and their work at Warner Bros. Studio. The couple remained married until Bogart’s death 12 years later.