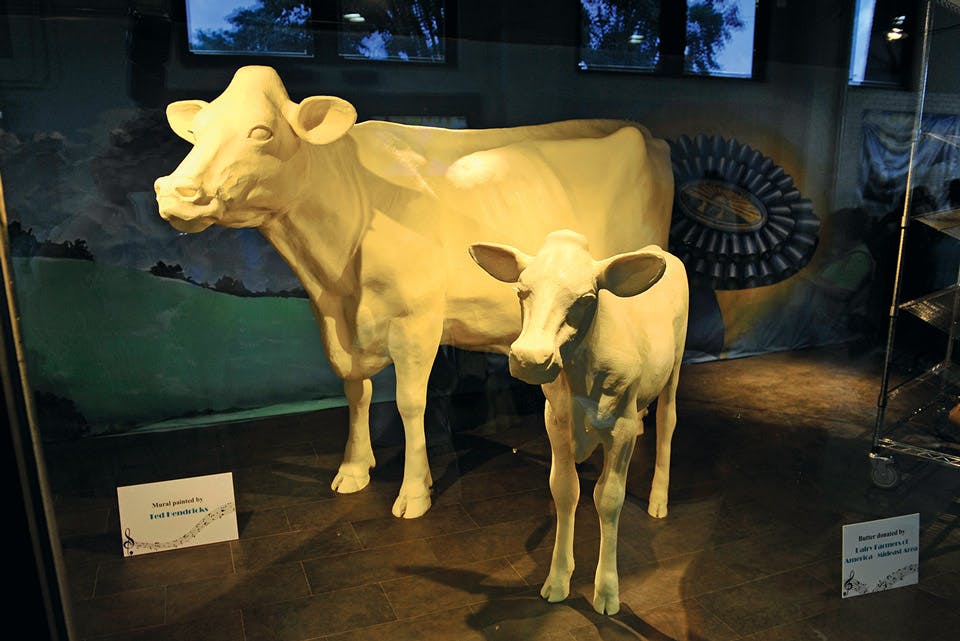 Here’s how a sculpture created more than a century ago led to an Ohio State Fair tradition.

One year, the calf lost an ear. Other than that, there have been no major meltdowns for one of the Ohio State Fair’s signature symbols. The calf and his Holstein mother, better known as the butter cow, help bring approximately 500,000 people through the Ohio Expo Center’s Dairy Products Building each year.

The butter cow made its debut at the fair in 1903 as the result of a sculpting contest. It was first crafted by A.T. Shelton & Co., distributors of Sunbury Co-Operative Creamery butter. By the 1920s, the butter cow and an accompanying butter calf had a home in the Dairy Products Building, and the annual tradition grew from there.

Beginning in the 1960s, other butter sculptures were added to the exhibit, which is sponsored by the American Dairy Association Mideast. Although the butter cow and her calf appear each year, other sculptures change and remain secret until just before the fair opens. Many have had an Ohio tie, including depictions of astronaut John Glenn and  Wendy’s founder Dave Thomas. Others have been symbols of our state, including a white-tailed deer, carnation and trilobite fossil

“Butter is an easy medium to work with, but some people don’t like it because of its greasiness,” says Paul Brooke, who contributes to the hundreds of hours of sculpting each year. “Plus, you have to be in a cooler to do it.”

To create the fair sculptures, layers of butter are slathered over frameworks made of mesh, chicken wire, wood or, in the cows’ case, steel. A few years ago, Matt Davidson, an Ohio dairy farmer who also has a degree in sculpture from Ohio University, welded together and donated a new framework for the butter cow. “The armature has an adjustable neck so we can move the cow’s head around each year,” explains Brooke.

About 2,000 pounds of butter are required to create each year’s butter display, according to Jenny Hubble, vice president of  communications for the American Dairy Association Mideast. A portion of the butter for the exhibit is donated by the Dairy Farmers of America, and for the past several years, it’s been butter that is past its expiration date, which makes good use of the otherwise inedible product.

Last year’s butter cow and butter calf were named Scarlet and Grayce in honor of Ohio State University’s color scheme — the result of an online naming contest. Fans of the sculptures can get details about how to suggest names for this year’s creations by following the butter cow on twitter.

“I think the 7-foot ice cream cone and the Liberty Bell we made one year are my favorite sculptures,” says Brooke, “but the cow has taken on a life of her own.”