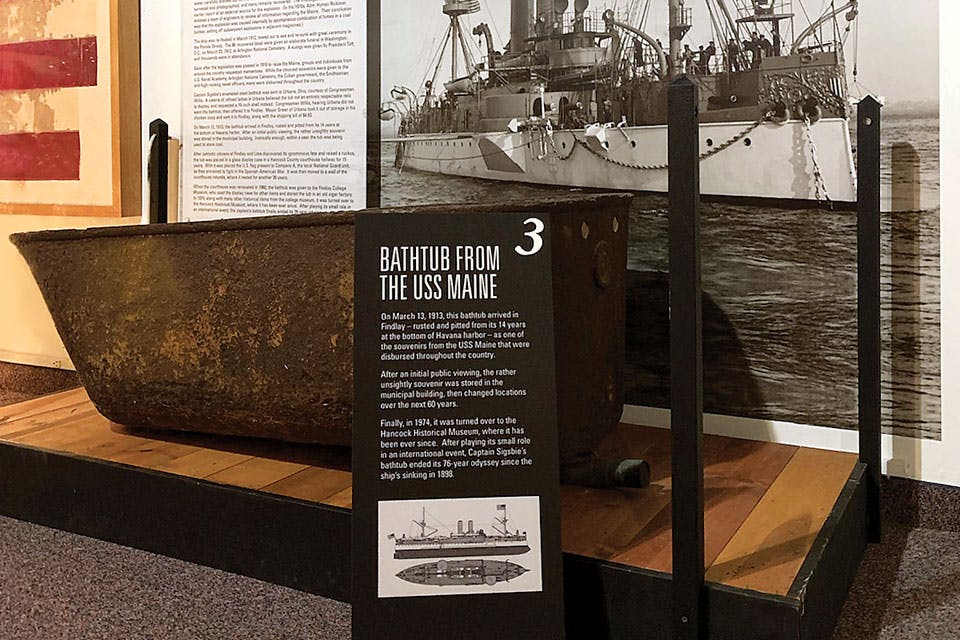 Bathtub from the USS Maine, Findlay ​

This artifact from the famous battleship journeyed from the bottom of the sea to the Hancock Historical Museum.

Bathtubs have earned an association with deep relaxation and luxurious escapes. Oversized ceramic slipper tubs are the stuff of dreams. But Capt. Charles Dwight Sigsbee’s tub is far from fancy. Rough and rusted, it’s set atop a wooden platform at the Hancock Historical Museum in Findlay — far from the sea bottom where it once rested.

The USS Maine had been patrolling Cuba’s Havana Harbor in February 1898 during a time of tension between the U.S. and Spain, when an explosion brought the ship down and claimed the lives of more than 260 men. The resulting strain between the nations spiraled into the Spanish-American War, and a sense of reverence for those lost on the USS Maine began to grow throughout the country.

“There was this outcry following the successful winning of the war that we should raise the ship [and] give a proper burial to those who were killed when it was sunk,” says Sarah Sisser, executive director of the Hancock Historical Museum. “A lot of municipalities throughout the country wanted some kind of artifact or remnant from the wreckage to commemorate how important this was in American history.”

In 1911, recovery efforts used a cofferdam to exhume the ship, pumping water out of a structure built around the wreck. Bit by bit, artifacts from the USS Maine began to show up throughout the country. The city of Urbana was the first to claim Capt. Sigsbee’s tub, but it never embraced the piece.

“A group of women — sort of socialites in Urbana — did not feel that it was dignified enough to display publicly,” Sisser says.

The tub instead ended up in storage, later finding its way to Findlay, where it was displayed and then returned to storage and back again until the 1970s, when the newly founded Hancock Historical Museum acquired the tub with other museum pieces from what was then known as Findlay College.

“It is now proudly displayed in our exhibit center,” says Sisser. “We have had visitors come specifically to see the bathtub. It’s always a unique starting point for conversations, something unique for people to see.”

The tub even made an indirect cameo on the TV game show “Jeopardy.”

“Alex Trebek was talking to a contestant and asked him about his travels — about some of the more unique things he had seen on road trips throughout the United States,” Sisser recalls. “And he said, ‘Well, actually, I saw a bathtub from the USS Maine at a small museum in Ohio.’ ”