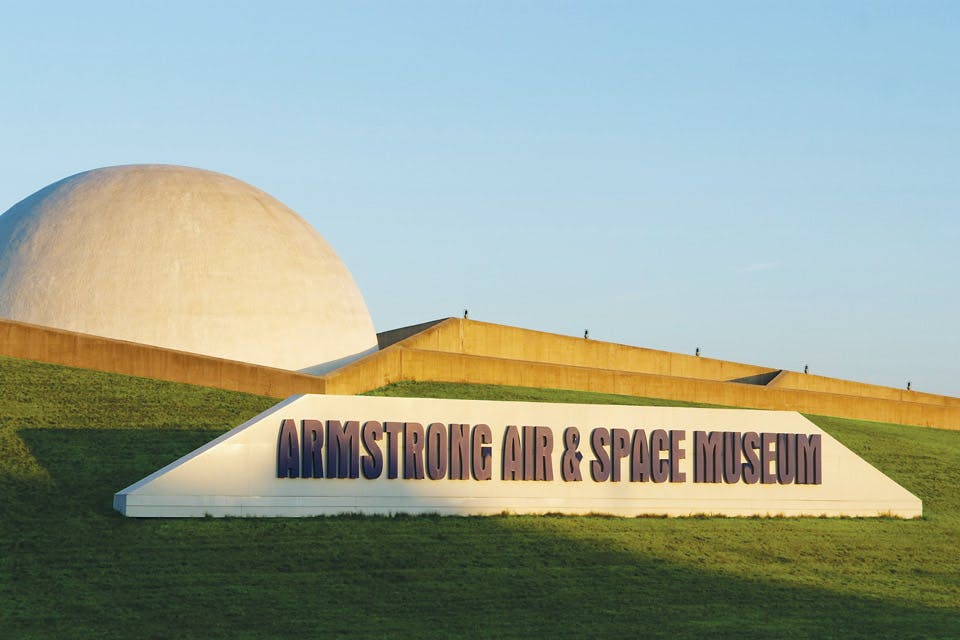 The city of Wapakoneta celebrates Neil Armstrong in a museum dedicated to the iconic astronaut’s life and accomplishments.

Designed to resemble a futuristic moon base, the Armstrong Air & Space Museum opened three years to the day after astronaut Neil Armstrong first set foot on the moon. In fact, a plan to build the museum was being hatched before the Apollo 11 mission was even complete.

“While Neil Armstrong and Buzz Aldrin were on the moon, [Ohio Gov. James A. Rhodes] had the intention to raise money and build the museum in Armstrong’s hometown of Wapakoneta,” says Dante Centuori, executive director of the Armstrong Air & Space Museum.

The state committed $500,000 on the condition that local residents could raise a matching $500,000. Today, the museum features artifacts and programs that highlight Ohio’s vital role in American aeronautics — from the early days of flight to the space shuttle era. But Armstrong is the museum’s namesake, and a variety of artifacts from his life offer insight into his story. Here are five to look out for when you visit.

Scout Patrol Flag: This flag from Armstrong’s days as a Boy Scout is signed by the famous astronaut and his fellow troop members. “It is kind of sublime when you think about it,” Centuori says. “Every person has some place where they started.”

F5D-1 Skylancer: These planes were built for the Navy during the 1950s, and Armstrong flew the aircraft during his time as a NASA test pilot. “The unique thing is that only four of those jets were built,” Centuori says, “and we are displaying the one that Neil Armstrong flew.”

Gemini 8 Space Capsule: Armstrong and fellow astronaut David Scott returned to Earth in this capsule during a mission that provided a defining moment for NASA. “It was the first successful docking of a spacecraft,” Centuori says. “That had to happen for the Apollo program to work.”

Neil Armstrong Spacesuits: The two suits on display include the one Armstrong wore during Gemini 8 as well as one he wore while training for Apollo 11. “It’s interesting to look and see how spacesuit design has evolved,” Centuori says.