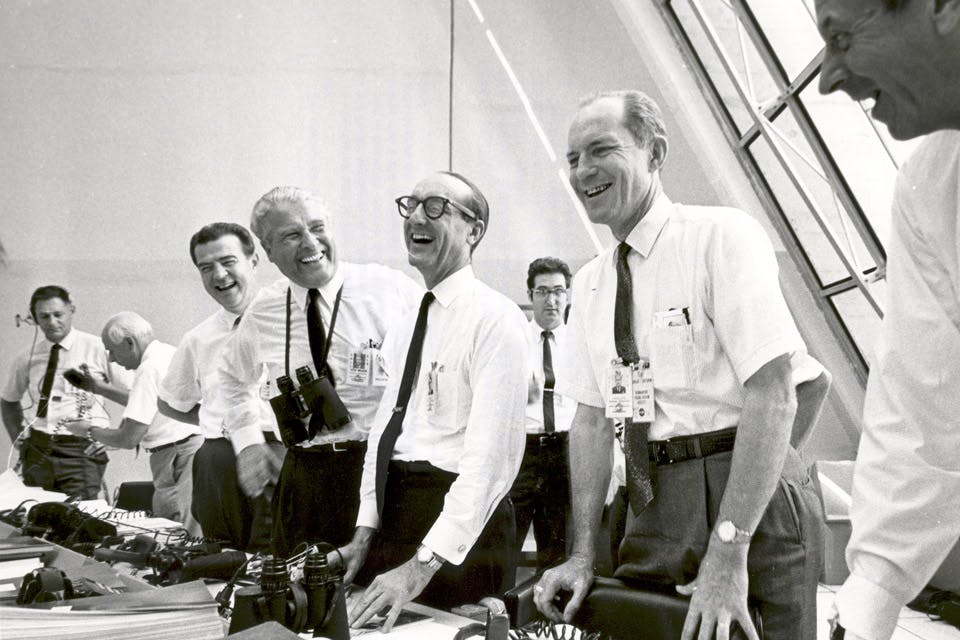 John Oldham, exhibits specialist at Cleveland’s NASA Glenn Research Center, shares what our trips to the moon taught us (and where we’ll go from here).

How to Stay on Track: The GPS system in our car, the cellphone that never leaves our hand, the navigation system airlines count on worldwide — all were born from mission-control devices. “We wouldn’t be able to carry 100-pound radios on our backs, which is what we would have had to do back in 1965 [for the same results],” John Oldham says. “Now we have these wonderful devices that came out of the need to communicate with a spacecraft a quarter of a million miles away on the back side of the moon.”

The Lay of the Land: Between 1969 and 1972, six Apollo missions brought back 842 pounds of lunar dirt and rocks comprised of 40 percent oxygen by weight. During a 1996 exploratory mission, ice crystals were discovered near the moon’s south pole, where temperatures hold fairly steady at minus-220 degrees Fahrenheit (as opposed to areas in direct sunlight which reach about 250 degrees Fahrenheit). Lunar water might also prove to be a key ingredient in rocket propellant, since the main components of water — hydrogen and oxygen — are the biggest materials used to power rockets. “The discovery of the oxygen is key to why we will go back to the moon,” Oldham says. “If we’re going to explore the rest of that great big cosmic wilderness, it’s vital we understand we can’t continue to take everything we need out there with us. The fact that oxygen is something we can create out there is one of the most profound lunar discoveries we’ve made.”

How to See Earth in a New Way: Although the scientific and technological advances are astounding, Oldham is just as reflective about the first view the world received of our planet as a single object floating in a sea of black. Taken aboard Apollo 8 by astronaut Bill Anders in December 1968, the iconic “Earthrise” image depicts Earth rising over the moon’s horizon. “There was so much unrest in the world that year,” Oldham says. “Seeing this photo made us collectively gasp. We saw the world not as us versus them. It was just us. We were all in this together.”

What’s Next? Oldham expects the United States will return to the moon in 2024 and humans will be living in lunar orbit and on its surface in a sustainable way by 2028. “Returning to the moon will provide a proving ground where we can develop, manufacture and get familiar with all the hardware and processes we’re going to need to travel to places like Mars and beyond,” Oldham says.