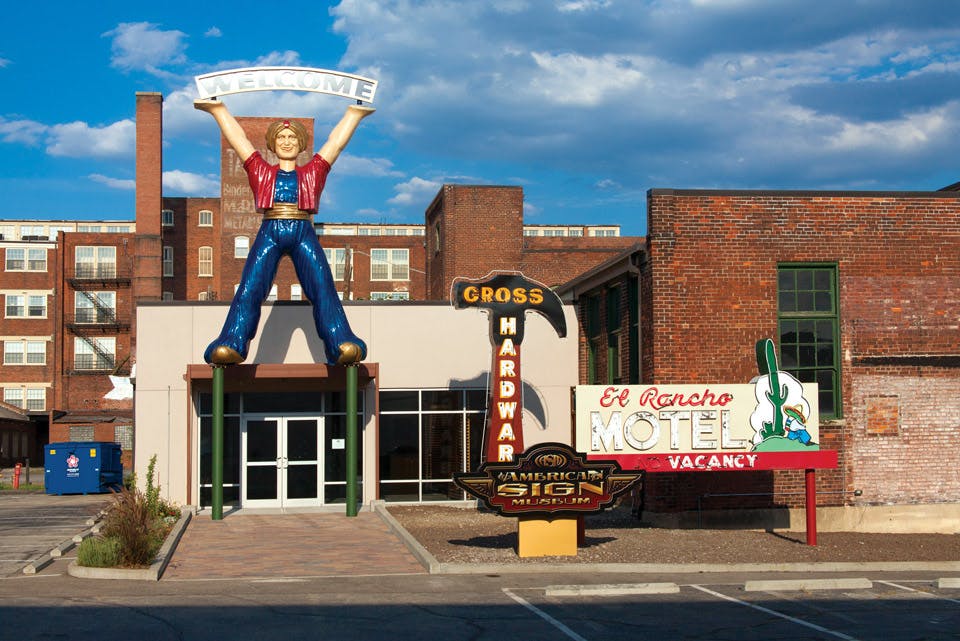 Visitors can check out signs from the 1890s through the 1960s at Tod Swormstedt’s Cincinnati attraction.

Tod Swormstedt’s 20,000-square-foot American Sign Museum is aglow in old neon, bygone gas station logos and vintage road markers. “I designed this whole main street of store fronts,” he says, referring to the mock streetscape that serves as a stage for the collection. “If we had a 1920s sign, we designed and built a 1920s storefront. We wanted to put the signs in context.”

Swormstedt opened his museum 10 years ago, but a growing collection prompted a move to its current location in 2012. A 20-foot-tall genie statue that once stood outside a California carpet business holds a “Welcome” banner above the museum entrance. Inside, visitors can check out signs from the 1890s through the 1960s. About half of the pieces here are donations. Swormstedt tracked the rest down by visiting sign shops and antique stores. It helped that he has connections in the business. His great-grandfather was the first editor of the sign industry’s trade magazine, Signs of the Times, and he worked at the publication himself for nearly 30 years.

“I had spent a lot of time in sign shops and saw them throwing out stuff all the time,” Swormstedt says. “I left the magazine and just kind of jumped in and started doing it.”