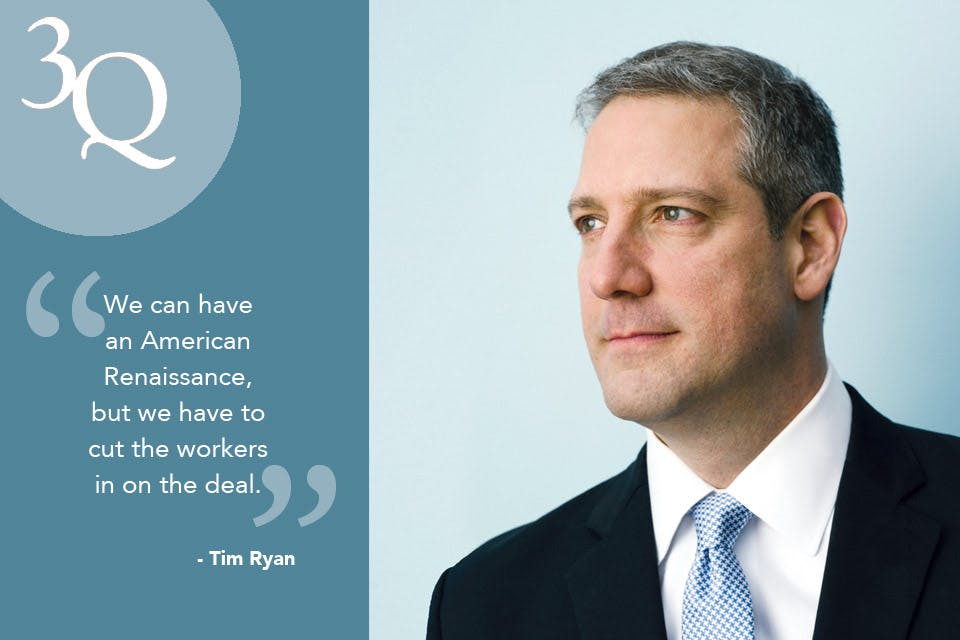 Niles native Tim Ryan was elected to Congress in 2003. In April, he announced he is seeking his party’s nomination for president.

Tim Ryan belongs to that rarest fraternity of politicians: Those who have never lost an election.

“I’m trying to keep it that way,” quips Ryan, congressman for Ohio’s 13th District and one of an increasingly large field of Democrats seeking to unseat President Donald Trump in 2020. The 45-year-old Niles native knows he has an uphill battle. But the man who made national news mounting a bid to topple his party’s House leader Nancy Pelosi in 2016 has no qualms about his role as an underdog.

“We had just lost to Donald Trump, who had won three of my counties,” says Ryan, who was elected to Congress in 2003. “I watched some very good people lose [office] because of our image of being out of touch with working people.”

Ryan is a self-described grinder, whose work ethic and resiliency were forged as a quarterback at John F. Kennedy High School in Warren.

“I was the kid who had the tire hanging from a tree in the backyard and threw a football through it 100 times,” he says. “It was all about grinding it out.”

The candidate, whose campaign theme is Rebuilding the American Dream, talked with us about James Traficant, the closing of General Motors’ Lordstown plant and his focus on education.

You succeeded the bombastic congressman James Traficant, who served a seven-year prison sentence. What did you learn from him?
Like a lot of bosses you have, you learn a lot of good things and you learn some things that aren’t that good. Through his ability to speak, I learned how powerful oratory was. At a fundraiser there would be a lot of money in the room, but he would be sitting at a table with the waiters, the cooks and the custodians. I saw him do that a million times. In a lot of ways, he never forgot where he came from.

How has the closing of the Lordstown plant affected your constituents?
I’m heartsick for them. It goes beyond the economic impact. … the devastation is very personal to everybody in our community. People are literally getting sick over the stress from this. The centralized bureaucracy hasn’t served us well. We have people working two to three jobs who still aren’t making ends meet. We can have an American Renaissance, but we have to cut the workers in on the deal.

You are focusing on education as a key issue. Why?
I am concerned about the mental wellness of our kids today. Teen suicide rates are up, childhood diabetes rates are up. We have gun violence and bullying. The challenges for our kids today are so great. Now, more than ever, we need an educational system with social and emotional curriculums that address their needs.