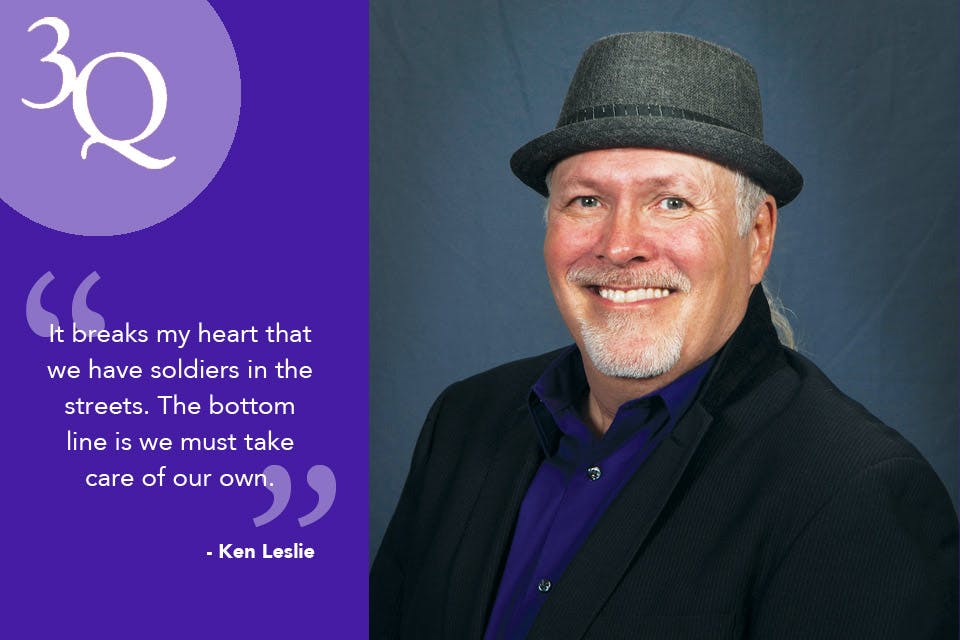 A former comedian who once lived out of his car, this Toledoan founded Veterans Matter in 2012 to help those who’ve served our country find housing.

May 2018
BY Barry Goodrich | Photo courtesy of Ken Leslie

May 2018
BY Barry Goodrich | Photo courtesy of Ken Leslie

As a stand-up comedian in the 1980s, Ken Leslie toured the country and performed alongside the likes of Jerry Seinfeld and Rita Rudner.

“One of the guys I loved the most was Sam Kinison,” says Leslie. “He was a real quiet guy but one of the darkest performers I’ve ever seen on stage.”

But Leslie’s time on the comedy-club circuit eventually caught up with him.

“You work one hour a night, and they give you free booze and drugs,” he says. “I was an addict and an alcoholic.”

Now sober since 1990, the Perrysburg native also experienced several weeks of homelessness prior to his time as a comedian.

“I was sleeping in my car and eating hard spaghetti and peanut butter,” says Leslie, who in 2012 founded Veterans Matter, a Toledo-based program that works with the Veterans Administration to provide financial aid for homeless veterans.

The program has housed more than 2,000 veterans and their families across 18 states. It covers northwest Ohio as well as the I-75 corridor as far south as Cincinnati, and has received more than $700,000 from First Nation Group, a medical-supply firm with a regional office in Toledo. We talked with Leslie about comedy, celebrity support and how Veterans Matter works.

How did you end up in comedy?
I think weird. It goes back to childhood. You acquire a skill by being funny and it gets you out of trouble. Our childhoods are where we develop skills of survival, no matter what they are. As a comedian, I enjoyed the craft of it … you write something and figure out how to say it. There’s a science to it.

How has Veterans Matter been able to receive support from entertainers ranging from John Mellencamp to Ice-T?
It’s people who know people who know people. We’ve worked with John Fogerty, Willie Nelson and Gene Hackman. Dusty Hill of ZZ Top helped raise over $350,000 for Texas veterans and Mellencamp did the same thing for Indiana. Katy Perry donated the [proceeds from the] meet and greets from her shows. We’ve got Katy on the left and Kid Rock on the right. What’s so beautiful about these artists is their compassion.

How does Veterans Matter help those waiting find housing?
We provide security deposits and first month’s rent for unhoused veterans who have received long-term housing vouchers from HUD and the Veterans Administration. The waiting time has been reduced from 160 days to 30 days with a 91 percent success rate in keeping them housed. It breaks my heart that we have soldiers in the streets. The bottom line is we must take care of our own.