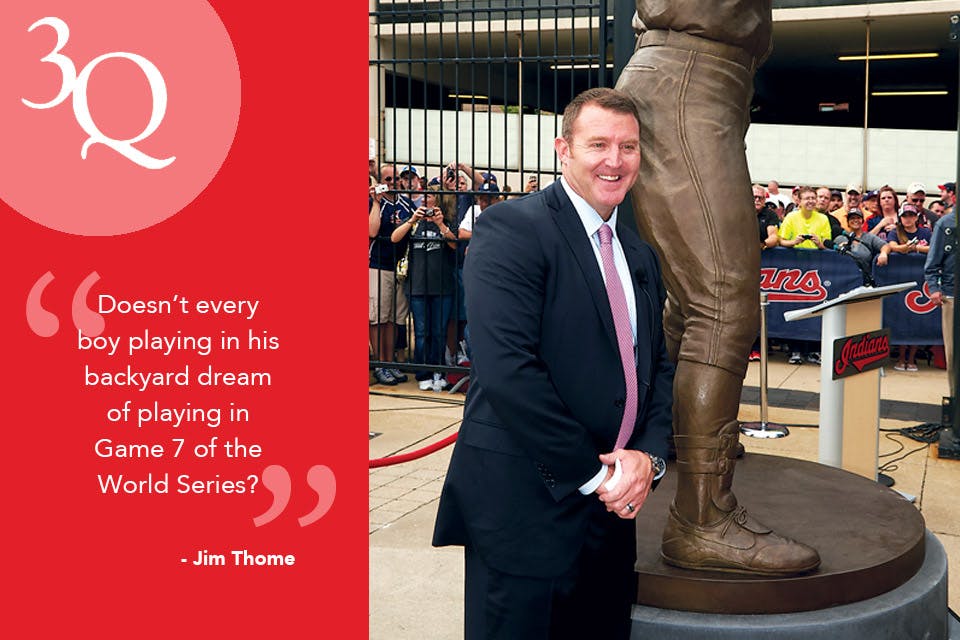 Indians legend Jim Thome discusses the origins of his batting stance, his most memorable All-Star Game and playing in the World Series.

When Jim Thome returns to Cleveland for the Major League Baseball All-Star Game this month, it will be only natural if his thoughts return to the All-Star Game the city hosted 22 years ago. On a July night at what was then known as Jacobs Field, baseball fans across the country witnessed what Thome and his Indians teammates had experienced all season — a frenzied fan base that exploded when Sandy Alomar Jr. clouted a dramatic, game-winning home run.

“Sandy was a true leader for our ballclub and to see him do that was such a special moment,” says Thome of Alomar’s blast. “At The Jake, our fans established such a great atmosphere and we [players] fed off it every night.”

Thome was a key member of the Indians during the adrenaline-filled 1997 season that ended with a heartbreaking loss to the Florida Marlins in Game 7 of the World Series. The power-hitting native of Peoria, Illinois, would go on to play for six teams in 22 seasons, hitting 612 home runs and driving home 1,699 runs — numbers that earned him a place in the National Baseball Hall of Fame last summer.

During All-Star Week, the 48-year-old Thome will be one of several former Indians players to participate in Play Ball Park, an interactive baseball-themed festival at the Cleveland Convention Center. We talked with Thome, who now serves as a studio analyst for MLB Network, about his distinctive batting stance, his favorite All-Star moment and playing in Game 7 of the World Series.

Your unique batting stance is set in stone in the Jim Thome statue at Progressive Field. How did it change your career?
In 1993, I was playing for Charlie Manuel in Charlotte and he was watching the movie “The Natural.” He told me to watch how Roy Hobbs held the bat out to get in a rhythm. Back then I was a closed-off hitter and was not pulling the ball at all. Charlie got me to open my hips and that’s when everything happened. … I couldn’t believe the change. Charlie and I have been through so much together. He’s a father figure to me.

You played in five All-Star Games. Which was the most memorable?
My favorite moment was the 1998 game in Boston when they brought out the All-Century team with players like Ted Williams. These were players my dad had always talked about when I was younger, and it really put things in perspective. Seeing those guys walking out on the field gave me chills.

What was it like coming so close to winning the World Series only to fall short?
Doesn’t every boy playing in his backyard dream of playing in Game 7 of the World Series? When you go through the grind but don’t accomplish that dream it’s very hard to swallow. But I’m grateful that I played with some great teammates in a great city.

For more information about the events surrounding the July 9 All-Star Game in Cleveland,
visit mlb.com/all-star.