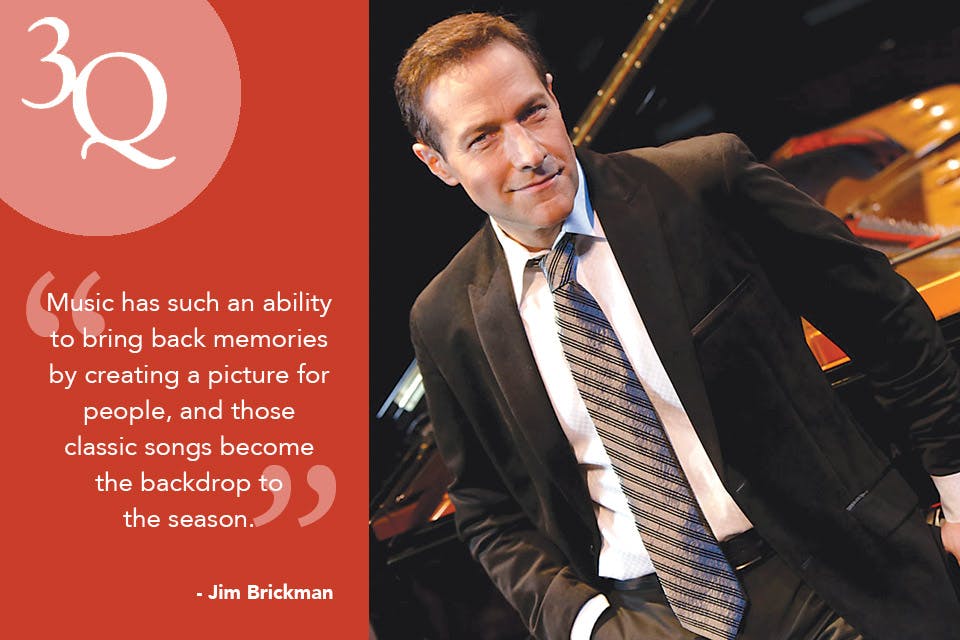 As the Ohioan returns for three holiday shows this month, we talk with him about the enduring appeal of Christmas music.

December 2018
BY Barry Goodrich | Photo courtesy of The Brickhouse Network

December 2018
BY Barry Goodrich | Photo courtesy of The Brickhouse Network

Jim Brickman’s introduction to the piano did not go according to plan.

“I knew it was time for me to find another piano teacher when she started vacuuming during my lessons,” Brickman says with a laugh. “She told my mother I just wouldn’t do what she wanted me to do, but to keep teaching me.”

Twenty-one No. 1 albums, 32 Top 20 radio singles and a pair of Grammy nominations later, Brickman has done rather well. This month, the Shaker Heights native brings his “A Joyful Christmas” holiday tour to three Ohio venues: Youngstown’s Stambaugh Auditorium on Dec. 20, Columbus’ Southern Theatre on Dec. 23 and Cleveland’s Severance Hall on Dec. 26. Brickman is performing with Anne Cochran and electric violinist Tracy Silverman on this tour. While there are plenty of holiday concerts on the calendar this month, Brickman’s shows hearken back to the days of a kinder, gentler Christmas.

“It’s the antidote for the loud shows with all the lights,” he says. “My concerts are pretty wholesome … and it’s nice to have some wholesome these days.”

We talked with Brickman about the sounds of the season, his Christmas favorites and his new album.

Why does holiday music have such a timeless appeal?
It’s nostalgia. Music has such an ability to bring back memories by creating a picture for people, and those classic songs become the backdrop to the season. Most music stays in its category and time, but Christmas music doesn’t. I’m not a fan of the latest pop singers doing versions of “The Christmas Song,” because there’s nothing they can do that can ever be compared to the original. But if you play a solo piano version you get the emotion and meaning without the comparison.

What are your favorite Christmas songs?
In our house we played The Carpenters’ Christmas album, which has an amazing singer with arrangements that have become definitive. And we listened to Nat King Cole. I’m a fan of the winter seasonal songs like “Winter Wonderland” and “Let it Snow.” I like playing the hymns and carols because there is so much freedom to interpret them. I’ll play “Silent Night” in 4/4 time instead of 3/4 and it sounds more contemporary. It’s a great example of what my original sound is.

Your new album “Soothe, Volume 4: Subzero” is a departure from your signature sound. How would you describe it?
It’s all about a relaxed, chill feeling. It’s the first time I’ve done something with a smooth groove. It’s something you might hear in a dark, velvet lounge. It’s a lot of improv over beats with a hypnotic vibe. Melodically it’s me but what supports it is very unlike me.