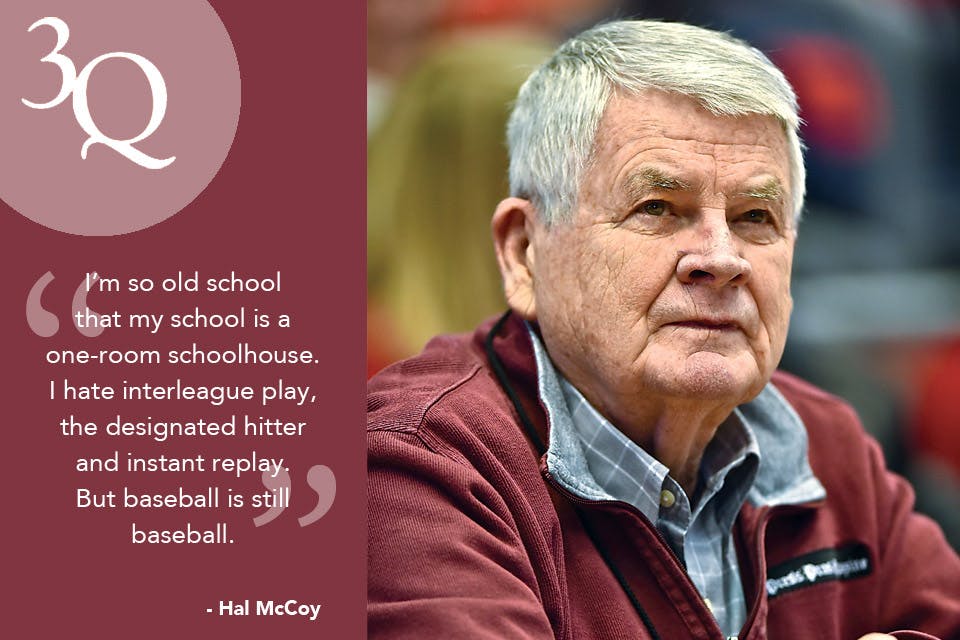 The veteran baseball writer discusses the Cincinnati Reds, Opening Day and the challenge that threatened his career.

Hal McCoy has seen it all when it comes to covering the Cincinnati Reds, from World Series championships to Pete Rose to infamous owner Marge Schott. But it’s what McCoy could not see when he arrived at Reds spring training in 2003 that nearly derailed his career. The previous year, he had suffered an optical stroke in his right eye. Three months after that, he had another stroke in his left eye, leaving him legally blind.

“I told my editor I couldn’t cover baseball if I couldn’t see,” says McCoy, who eventually decided to visit Reds training camp in Sarasota, Florida, that spring. “I stopped at the doors to the clubhouse and looked around. The faces were fuzzy and the room was dark. Aaron Boone took me by the arm and walked me to his locker. He told me, `We’re all here to help you.’ Had it not been for Aaron, I probably would have retired.”

This month, McCoy begins his 46th year of covering the Reds for the Dayton Daily News. The Akron native and Kent State University alum is chauffeured to all Reds home games and uses a large flat-screen TV in the press box.

“I’m so old school that my school is a one-room schoolhouse,” says the 77-year-old McCoy, who was inducted into the National Baseball Hall of Fame in 2003. “I hate interleague play, the designated hitter and instant replay. But baseball is still baseball.”

McCoy talks with us about Opening Day, his favorite players and a memorable encounter in Cooperstown.

You covered Opening Day games at both Riverfront Stadium and Great American Ball Park. Which ones stand out?
Unfortunately, one was when umpire John McSherry, a friend of mine, was behind home plate when he grabbed his chest and staggered back to the screen. He died of a heart attack … a gruesome way to start a baseball season. Another year, Ramon Hernandez hit a two-out home run in the bottom of the ninth to win the game in his first season with the team.

Who are your favorite Reds players through the years?
The 1990 team that swept the A’s in the World Series was fun to cover. Lou Piniella was the manager and the Nasty Boys — Rob Dibble, Norm Charlton and Randy Myers — were all certifiably crazy. Eric Davis is my all-time favorite player. [Reds owner] Marge Schott hated my guts. She called me “that guy from Dayton.”

What was it like being inducted into the National Baseball Hall of Fame?
It was a whirlwind weekend. After the ceremony, my family and I were walking up a side street and a little old lady came up to me with a program, asking me to sign it. I asked who she was and she said, “I’m Babe Ruth’s daughter.” I told her, “Let me have your autograph.