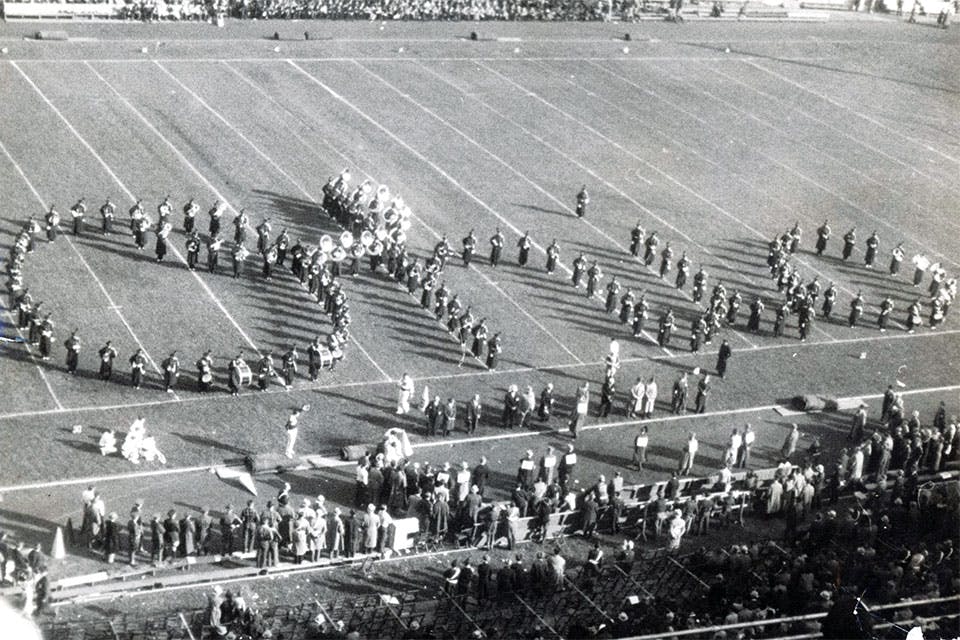 Band director Eugene Weigel’s vision for a smooth and flowing formation made its debut at Ohio Stadium in October of that year.

Little did Ohio State University Marching Band director Eugene Weigel know that when he decided to forgo the traditional block-letter “Ohio” formation in exchange for one in a flowing script that it would go on to become one of college football’s most recognizable traditions.

What is considered the first true Script Ohio was performed Oct. 24, 1936, during a game that pitted the Buckeyes against Indiana University in front of a home crowd of 44,410 fans. (Although the formation was originally tried Oct. 10, 1936, during the University of Pittsburgh game, the “O” did not revolve quickly enough, leaving the band to give it another shot at their next home appearance.)

While Ohio State beat Indiana by a score of 7-0, keeping intact its 12-year record against the school, it was the display put on by the Ohio State University Marching Band that grabbed the most attention. The Cincinnati Enquirer reported in its Oct. 25, 1936, edition that Weigel had, “uncorked a new trick play of his own today ... to give other bandsmen a headache and push his own musicians toward another mythical all-American band title.”

Weigel, who became band director at Ohio State in 1929, told the Enquirer how he originally came up with the idea for the Script Ohio formation.

“Weigel took a hint from the skywriting airplanes he watched perform above the stadium and taught his 120-piece band to write in script as smooth and flowing as that of the smoke writers.”

The newspaper credited the Ohio State University Marching Band with being “the first to perfect the skywriting style of marching.”

The formation became so iconic, that a Script Ohio 50th anniversary celebration was held during homecoming weekend in 1986, with more than 40 members of the 1936 OSU Marching Band returning to take to the football field one more time. Mickey Davis, features editor of the Dayton Daily News, wrote in the newspaper’s Sept. 20, 1986, edition that Script Ohio is “the one signature that’s every bit as flamboyant as John Hancock’s.”

“The original ‘John Hancock’ may not give you goosebumps, but Script Ohio always does. Script Ohio transcends school loyalty — even for those who have no special allegiance to Ohio State University or Buckeye Football.”