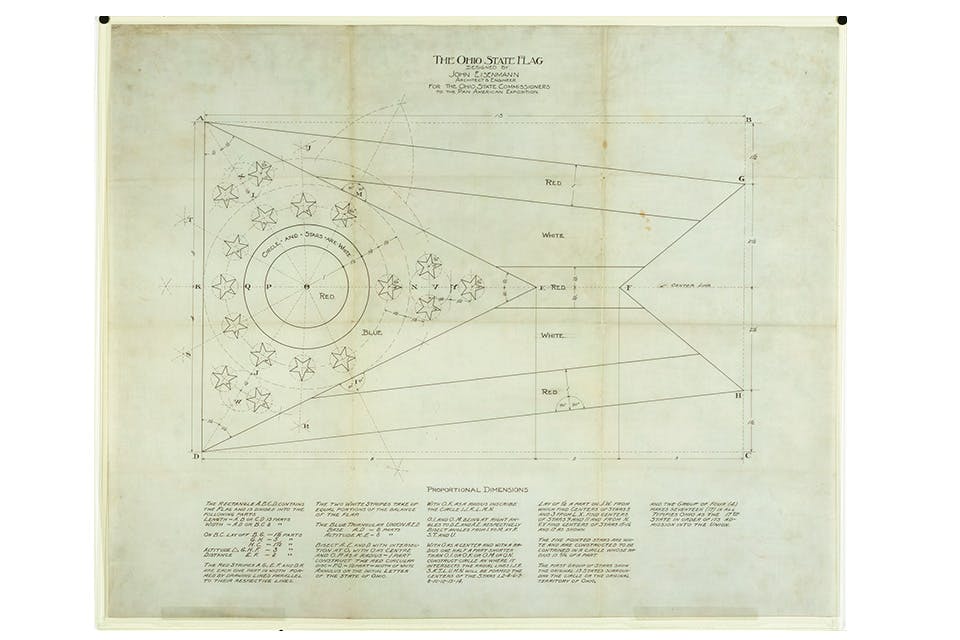 Nearly 100 years after Ohio became a state, the legislature approved a flag design that symbolizes our history and place in the nation.

May 2021
BY Nathan Havenner | Photo courtesy of Ohio History Connection

May 2021
BY Nathan Havenner | Photo courtesy of Ohio History Connection


Ohio became a U.S. state on March 1, 1803, but it would take almost another century for the state legislature to approve an official state flag. The design, which was formally adopted on May 9, 1902, is now a familiar sight to generations of Ohioans, but it was first created to be flown over the Ohio building during the Pan-American Exposition in 1901.

The flag design was well received at the Buffalo exposition, during which Ohio native and President William McKinley was fatally shot. Afterward, Ohio House Rep. William S. McKinnon proposed the red, white and blue design as the state flag of Ohio.

Cleveland architect John Eisenmann designed the banner in a pennant shape — more properly known as a swallow-tail burgee — so it could be displayed in any position without affecting the symbolism contained within. An article in the March 15, 1902, edition of the East Liverpool Evening News Review outlined some of those touches.

“The triangles formed by the main lines of the flag represent the hills and valleys as typified by the state seal. The five stripes stand for the five states carved out of the Northwest Territory. The stars, indicating the 13 original states of the union, are grouped about the circle, which represents the original Northwest Territory and that Ohio was the 17th state admitted into the union, is shown by adding four additional stars.”

Although the March 29, 1902, edition of The Dayton Evening Herald reported, “a waving of flags and cheers when Speaker McKinnon’s bill creating an official Ohio flag [was passed],” not all were in favor of a state flag.

Darke County, Ohio’s newspaper The Greenville Democrat reported in its May 28, 1902, edition that while the new design was reminiscent of the American flag, “The stars and stripes of “Old Glory” ought to be good enough for any state without amendments like the above.”

The Evening Telegraph of Bucyrus argued in its May 21, 1902, edition that while the flag wasn’t necessary, it did no real harm either. “There was no real need to have the Ohio flag but there is no argument against it worth considering.”